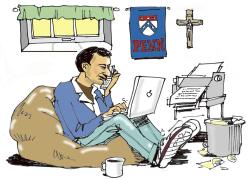 In December 2004, a young Philadelphian logged onto Blogger and started writing about the Catholic church. More than 11 million hits later, Whispers in the Loggia (whispersintheloggia.blogspot.com) has become the must-read for anyone interested in the inner workings of the church.

Let’s call it what it is: church gossip. Even the blog name conjures up images of Vatican bureaucrats divulging secrets in ancient Roman corridors. Which isn’t too far from what happens -- only via cell phone to a 20-something blogger in his parents’ basement in south Philly.

But for information-starved Catholics used to “no comment” from church communications professionals, Whispers is both a breath of fresh air and a guilty pleasure. Its gossip is juicy and usually correct. In fact, the blog has been so spot-on that readers assumed the author was some highly-placed Vatican cardinal (the photo of a red-frocked one in the user profile probably contributed to this rumor).

Instead it is written by Rocco Palmo, a recent University of Pennsylvania political science graduate who says he’s a disciple of both Jesus and Howard Stern. He sure picked a great time to start what he calls “the Vatican sports section” -- in the wake of the Boston sex abuse scandals and just months before the death of Pope John Paul II and the election of Pope Benedict XVI.

Motivated in part by the institutional church’s communication failures, Palmo wanted to create a Catholic news site that gave the straight story. “I did not feel the church was speaking to me. The church was either speaking over my head or almost in some way I felt, in my own diocese, insulting my intelligence,” he told Catholic TV. “To be pro-life, we need to respect the human dignity of the audience we’re speaking to.”

Palmo, who also wrote for the London-based Tablet for a few years, posts daily on Whispers, sometimes more than once a day, and appears frequently as a source in secular newspapers for stories on the church. Recent Whispers posts include the inside scoop about the Legionaries of Christ inquest, an evaluation of New York’s new Archbishop Tim Dolan, and a look at booming sales of St. Joseph statues for good luck with real estate.

Palmo also distinguishes himself from other Catholic bloggers, too many of whom -- on the right and the left -- think they’re their own bishop, he says. “I don’t consider myself a Catholic blog,” he told Busted Halo in a 2006 interview. “I consider myself a news blog that covers the church among other things. ... Seeing all this demonization and destruction that some Catholic blogs partake in ... is painful to watch and highly unfortunate.”

I agree with Palmo that too many Catholic blogs are used to pointing fingers and ranting -- often at fellow Catholics. While it’s nice and democratic that the Internet gives everyone a soapbox (or at least everyone with Internet access), some might want to use that soap to wash out their mouths. Call me biased, but I think the majority of these mudslinging sites are by traditionalist Catholics -- perhaps because it seems more Catholic blogs slant to the right than to the left.

My theory is that those who feel outside the mainstream are more likely to take advantage of alternative media like blogs. And traditionalist Catholics are still outside the mainstream of American Catholicism (if you look at the entire church, not just the hierarchy). Most prominent national Catholic publications are still moderate-to-progressive and feature more liberal bloggers, including National Catholic Reporter’s own NCR Today, whose writers include NCR editors and contributors from all over the country, including yours truly. (Commercial break: If you haven’t checked out NCR Today yet, you’ll find lots of interesting news and opinion there, including a “Morning Briefing” first thing every day.)

Other progressive bloggers write for America’s In All Things, Commonweal’s Dot Commonweal and U.S. Catholic’s blogs. But there are also a number of individual bloggers who favor a post-Vatican II type of Catholicism. Here are some of my favorites:

What we say and how we say it