A Catholic foray into for-profit health 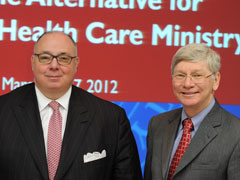 NEWARK, N.J. -- As health care organizations continue to adapt to a changing business climate, industry insiders are paying close attention to a proposed deal that would bring seven Catholic hospitals in New Jersey under the management of a new venture described as the nation’s first for-profit Catholic health system.

Ascension Health Care Network, a partnership between the largest Catholic health care system in the U.S., Ascension Health, and private equity firm Oak Hill Capital Partners, is now in “exclusive negotiations” with the leadership of St. Joseph’s Healthcare System (owner of hospitals in Paterson and Wayne), St. Clare’s Health System (Denville, Boonton Township, Dover and Sussex Borough) and St. Mary’s Hospital in Passaic, according to the network’s president and CEO, Leo Brideau. But he said the merger would not undermine the mission at the core of the seven hospitals -- to care for the poor and vulnerable -- which would remain ministries of the Catholic church.

“‘For-profit’ describes our tax status; it doesn’t describe our purpose,” Brideau said, describing the new health system at a symposium titled “Is For-Profit Structure a Viable Alternative for Catholic Health Care Ministry?” held March 26-27 at Seton Hall University’s School of Law in Newark, N.J., and attended by a couple hundred of the industry’s decision-makers, from health system executives to attorneys to financial analysts.

“What Ascension is trying to do, basically, is provide the necessary capital to rescue some of these small Catholic hospitals that are not going to make it on their own,” Dillon said. Although a lot of questions remain unanswered, she said, the model is a “great example of what might be done.”

Catholic health care organizations -- which make up nearly 13 percent of the nation’s hospitals -- have been steadily consolidating for the past few decades, as religious congregations looking to make better use of resources fused their health systems together to form larger systems, but the concept of a for-profit hospital that maintains a Catholic identity is relatively new. And leaders of the Catholic organizations are proceeding with caution.

“In any transaction such as this, a primary question will be Catholic identity and how it would be affected positively or negatively,” said Charity Sr. Rosemary Smith, chairperson of the board of trustees of St. Joseph’s Healthcare System. Smith, who would not comment specifically on the ongoing negotiations with Ascension Health Care Network, said the deal has many moving pieces and “every aspect of it is still under conversation.”

Catholic health care organizations, which describe their work as a continuation of “the healing ministry of Jesus,” maintain a direct link to the Catholic church -- as ministries operating in the name of the church -- via the sponsorship of religious congregations, which ensure the organizations stay true to their mission. While many health systems receive sponsorship from a few different congregations, reflecting partnerships forged over the last few decades, Ascension Health is among several systems that have adopted the public juridic person model, and created a new sponsoring entity called Ascension Health Ministries.

Although the for-profit structure is uncommon in Catholic health care, it is not unprecedented. One organization discussed as an example at the symposium, St. Vincent Hospital in Worcester, Mass., founded in 1893 by the Sisters of Providence, has been operating as a Catholic hospital within a for-profit system for 15 years.

The hospital has managed to turn a profit while keeping alive a strong pastoral care program and the Catholic tradition of involvement in the community, said Keith Pitts, vice chairman of Vanguard Health Systems, which bought the hospital from its first for-profit owner seven years ago.

Pitts, who worked for the hospital’s first for-profit owner, said St. Vincent retains its Catholic identity by means of a “Catholicity covenant” he drafted in the 1990s with the assistance of the local bishop, a document that incorporates ethical and religious directives.

“Tax status does not dictate culture,” Pitts said, “behavior does.”

David Cyganowski, a mergers and acquisitions expert who advises hospital systems on business transactions, told the audience at the symposium that the health care industry is “on the verge of significant consolidation” and seeing “unprecedented levels of partnership discussions,” as health care providers small and large try to figure out how to turn a profit in a changing market.

The business climate, he suggested, is ideal for companies looking to reinvent their business models.

“We are at the tipping point already in markets, whether they’re Massachusetts or Connecticut, or Illinois or out West, where health care systems are coming together very, very quickly,” said Cyganowski, managing director of Kaufman Hall & Associates. “That represents an opportunity for us to let the lines blur, think out of the box, and design partnerships that really are going to ultimately improve the quality of care that we’re delivering.”

Brideau said Ascension’s decision to create the for-profit Catholic system grew out of the realization that the majority of Catholic hospitals involved in mergers in the last three years -- many of them struggling financially -- are merging with secular systems. A number of them had expressed an interest in merging with Ascension, he said, but as a nonprofit system, Ascension didn’t have the needed capital to support new hospitals.

“The challenge that we have at Ascension Health is that, with the 70-plus hospitals we have across the country, the competition for capital is absolutely fierce,” Brideau said. “Most of the hospitals who knocked on the door aren’t knocking on the door because they have excess capital they’d like to contribute to us.”

The system began to look into ways to create different sources of capital, Brideau said, and decided to form Ascension Health Care Network after months of research and discernment. Brideau summed up some of the thinking behind the new venture:

Last year the Catholic Health Association, which represents about 2,300 Catholic organizations, approved a temporary bylaws amendment to allow its members that have changed, or may change, their corporate structure to for-profit to remain members for one fiscal year, according to a May 15 article in Catholic Health World, an association publication. The membership is expected to vote in June to extend that amendment for another three years, while a task force appointed by the association last year continues to study the for-profit model for Catholic organizations.

In the Catholic Health World article, CHA vice president and general counsel Lisa Gilden said, “The board is committed to a very thoughtful, inclusive study of all the dimensions of this issue, and they recognized that more time is needed.”

Father Bill was one of the good guys