Cause opened for Catholic educator dedicated to those with disabilities 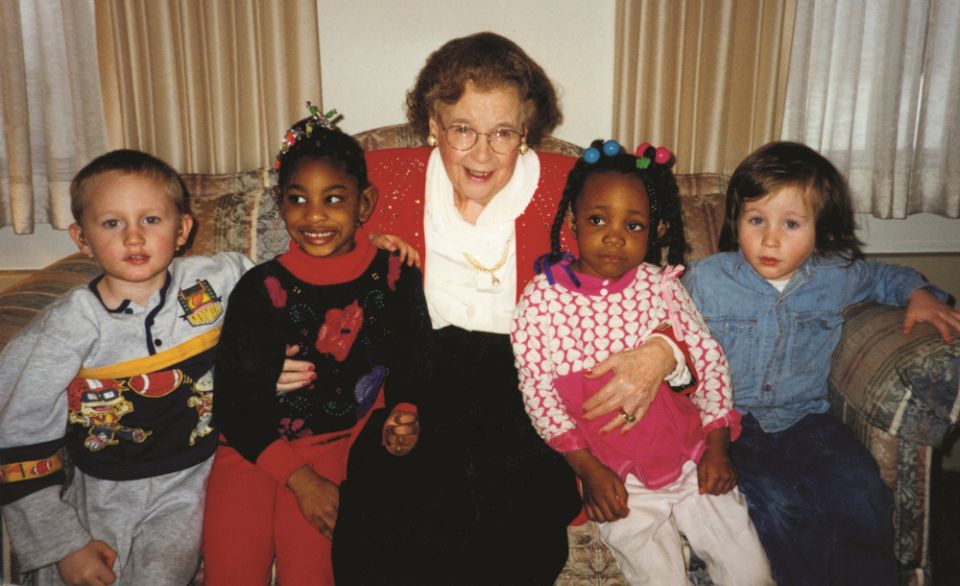 Gertrude Barber is pictured with children in an undated photo in Erie, Pa. Bishop Lawrence T. Persico of Erie announced Dec. 17, 2019, the opening of the canonization cause for Barber, founder of what is now called the Barber National Institute for adults and children with intellectual disabilities and behavioral health challenges. (CNS/courtesy Barber National Institute)

Erie, Pa. — Bishop Lawrence T. Persico Dec. 17 announced the opening of the canonization cause for Gertrude Barber, a renowned Erie educator and Catholic woman of faith who dedicated her life to serving children and adults with intellectual disabilities/autism and their families.

"It is an honor to open the cause for sainthood for Dr. Gertrude Barber," the Erie bishop said. "Her family members, and the thousands of families who have been touched by the work she initiated in her lifetime, are surely thrilled to be part of this historic moment.

"But I am particularly pleased that the good work of Dr. Barber, motivated by her Catholic faith and undertaken on behalf of those in need," he continued, "will now be known more fully by those throughout our region and beyond."

Persico made the announcement during a gathering of supporters and members of the Barber family with staff, students and adults at the Barber National Institute. Five days earlier, on the feast of Our Lady of Guadalupe, he issued a formal decree opening the cause.

A diocesan news release said the decree will be shared in Catholic churches across the Diocese of Erie the weekend of Dec. 28 and 29. It also can be found at www.DrBarber.org.

Gertrude Agnes Barber (1911-2000) was born in Erie and lived with her family on Newman Street, a short distance from what is now the Barber National Institute, while she attended Villa Maria Academy.

Barber "had a natural desire for learning; she was a successful scholar and built her career around education by passing on her message and practically applying that all individuals have a right to develop to their fullest potential," says a biography of her on the website https://www.barberinstitute.org.

She began her career as a teacher and then worked as a home and school counselor, psychologist, coordinator of special education programs, and finally as assistant superintendent of the Erie School District.

"This position presented many challenges when it became her job to tell parents of children with special needs that no services were available to educate their children in the community," her biography says. "Barber decided it was time to make a change. In 1952, with the help of a group of dedicated teachers and parents, she established the first classroom for children with developmental disabilities."

This was the founding of the Dr. Gertrude A. Barber Center. In 2003, the center name was changed to Barber National Institute, which currently serves 5,370 children and adults annually in locations across Pennsylvania. It has about 2,600 employees.

The institute provides services in the areas of autism, deaf and hearing impairment, behavioral health diagnosis, and intellectual disabilities.

With the formal opening of her sainthood cause, Barber now has the title "Servant of God." A formal inquiry will begin a review of her life, work and holiness. Persico has approved the appointment of Msgr. Thomas McSweeney to serve as diocesan postulator for the cause. He is a retired priest and former director of Erie's diocesan Office of Evangelization for Communications.

McSweeney will be the main point of contact for the gathering of documentation and formal interviews with anyone who wants to discuss interactions they had with Barber during her lifetime. The testimony will become part of the official documentation for the canonization process, all of which will eventually be sent to the Vatican.

Although Barber died years before Persico's 2012 appointment to head the Diocese of Erie, he noted he had heard about her good works and her faith commitment from his earliest days in the diocese.

He said he has visited the Barber National Institute many times and offered Mass there. "I know the family and staff is deeply committed to carrying out the mission she established."

Persico first recognized the Association for the Cause of Gertrude A. Barber, a public association of the faithful, in August 2019. The association's members include the parent of a child with a disability, staff members of the Barber National Institute and Barber family members.

The association formally submitted a petition for the cause to the bishop in October.

John Barber, a nephew of Gertrude Barber, is the current CEO of the Institute. He said his aunt’s spirit lives on through the many children she has helped.

"If you really want to feel her spirit, walk through the halls here, visit a classroom, go and have dinner with some of our people who live in group homes," he told the news outlet www.yourerie.com.

People | Cause opened for Catholic educator dedicated to those with disabilities