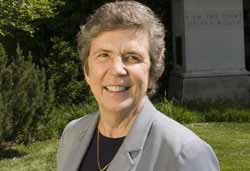 The Catholic Common Ground Initiative presented its annual Cardinal Joseph Bernardin Award June 26 to Sr. Carol Keehan, a Daughter of Charity who is president and CEO of the Catholic Health Association.

Keehan was selected because of "her extraordinary contributions to creating common ground between church leaders and government officials, organized labor and Catholic health care providers, the rich and the poor," according to the citation presented to her.

Mercy Sr. Doris Gottemoeller, senior vice president for mission at Catholic Healthcare Partners and a member of the Catholic Common Ground Initiative Committee, read the citation. It praised Keehan for her efforts to achieve national health care reform and for her work on a recent document by representatives of Catholic health care, the labor movement and the U.S. bishops' conference setting principles designed to ensure a fair process as health care workers decide whether to join a union.

"Wherever she goes, she promotes the church's health care ministry in a pluralistic society, and calls the ministry to be its best self in the face of sometimes hostile or skeptical critics," it adds.

The award is named for the late Chicago archbishop who was a co-founder of the Catholic Common Ground Initiative.

12 Catholic women under 40 making a difference

Author lifts the veil off of the 'nones'