Confessions of a judgmental liberal 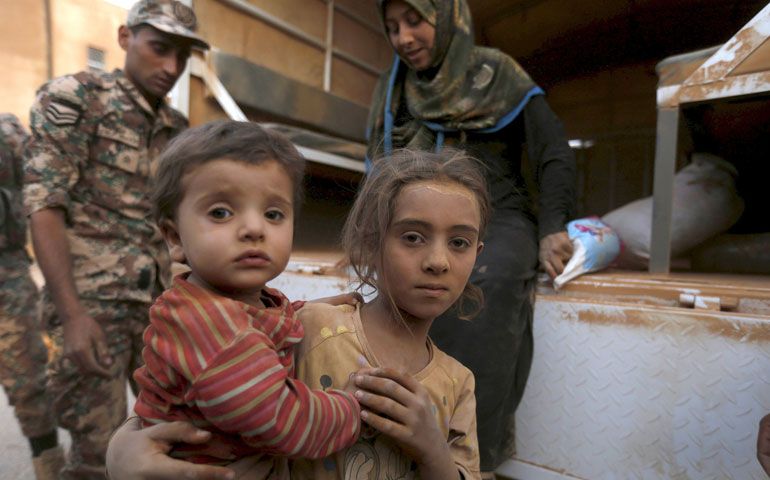 Syrian refugee children covered with dust arrive Sept. 10 at the Jordanian border with Syria and Iraq, near the town of Ruwaished (CNS/Reuters/Muhammad Hamed)

I like to put my money where my values are. I don't shop at Wal-Mart, I've never eaten at Chick-fil-A, and I invest in socially conscious mutual funds. This commitment is doubly important when it comes to charitable giving.

So I found myself in a bit of a moral quandary when I learned this past spring that Catholic Relief Services, my go-to organization for its excellent worldwide development work, did not appear to support a high-ranking employee who was "outed" for being in a same-sex marriage.

Rick Estridge had worked for CRS for more than 15 years and had promoted at least five times, most recently to vice president of overseas finance. No one seems to dispute that he had been doing a fine job in his various roles.

But in late April, Estridge was "outed" by a self-described Catholic watchdog group, which posted a copy of his marriage license on its website. The story was picked up by conservative Catholic media, and by early June, Estridge, who is not Catholic, had resigned.

In the midst of this, a massive earthquake hit Nepal, killing more than 9,000 people and injuring and displacing tens of thousands of others. Normally, I would respond to such natural disasters by reaching for my (virtual) checkbook and donating to CRS, whom I trust to use my money well in helping the people of Nepal.

This time I didn't.

Because CRS didn't take a strong, immediate stand in support of Estridge, I questioned whether I could unequivocally say the organization still represented my values. (CRS did write a statement that supported Estridge and decried the attacks against him, but it came almost six weeks later and was not distributed widely.)

A few months later, the body of a 3-year-old Syrian refugee boy washed up on the shore in Turkey, and once again the world rallied to embrace our sisters and brothers who are suffering overseas -- a cause, I might add, CRS has been addressing for years.

Again, I was paralyzed, since I no longer felt comfortable donating to my usual charity.

Then I read a Facebook post from one of my favorite blogs, Momastery.com. In response to readers asking her to weigh in on the controversy over a Kentucky clerk who refused marriage licenses to gay couples, the blogger, Glennon Doyle Melton, wrote:

If you are a person spending any minutes discussing your "faith-based anti-gay-marriage" stance while terrified babies are slipping out of their desperate parents' arms and into churning, deep, dark waters never to be seen again ... well, you're looking at the reason the world has become less and less interested in your "faith based anything."
Entering into relief work with the refugees = hard. Complaining about gay people getting married = easy. Stop choosing the easy thing and pretending that "defending God" is your cross to bear. God didn't ask you to defend God. God is bigger than you and doesn't need your protection. But God's CHILDREN DO NEED YOUR PROTECTION. God's children are dying for the hope of safety for their families. Shift your energy to them.

Glennon was addressing Christians who oppose gay marriage, and I cheered and shared her words on social media. Then I realized they also applied to me. I had not helped the people of Nepal, nor was I doing much for Syrian refugees, because I was taking a self-righteous, judgmental stance against the very organization that could help them.

I don't mean to imply that discrimination against lesbian, gay, bisexual and transgender people is not a cause worth fighting for, or one worth withholding a contribution. But when I considered the situation more deeply, I realized that CRS had been caught in a tough spot, trying to defend its employee while still recognizing the damage an attack by conservative Catholics can have on its ability to do the good work it does. I had been too quick to judge.

Perhaps this is what Pope Francis is trying to teach us: not that we should never make any judgments about the rightness or wrongness of people or actions, but that we shouldn't be so quick to judge that we miss the broader point. Boycotting CRS is not the same as boycotting a chicken restaurant. In the end, I wasn't punishing CRS; I was punishing the people of Nepal and the refugees from Syria.

I'm returning to supporting and donating to Catholic Relief Services. I pray that those who believe in the right of all people to marry -- and those who believe that marriage should be between a man and woman -- will do so, too. Helping the world's poor should be something we can all agree on.

Column | Confessions of a judgmental liberal

Ted Hesburgh and Richard McBrien: the titans of Notre Dame

What Pope Francis can teach President Obama this week