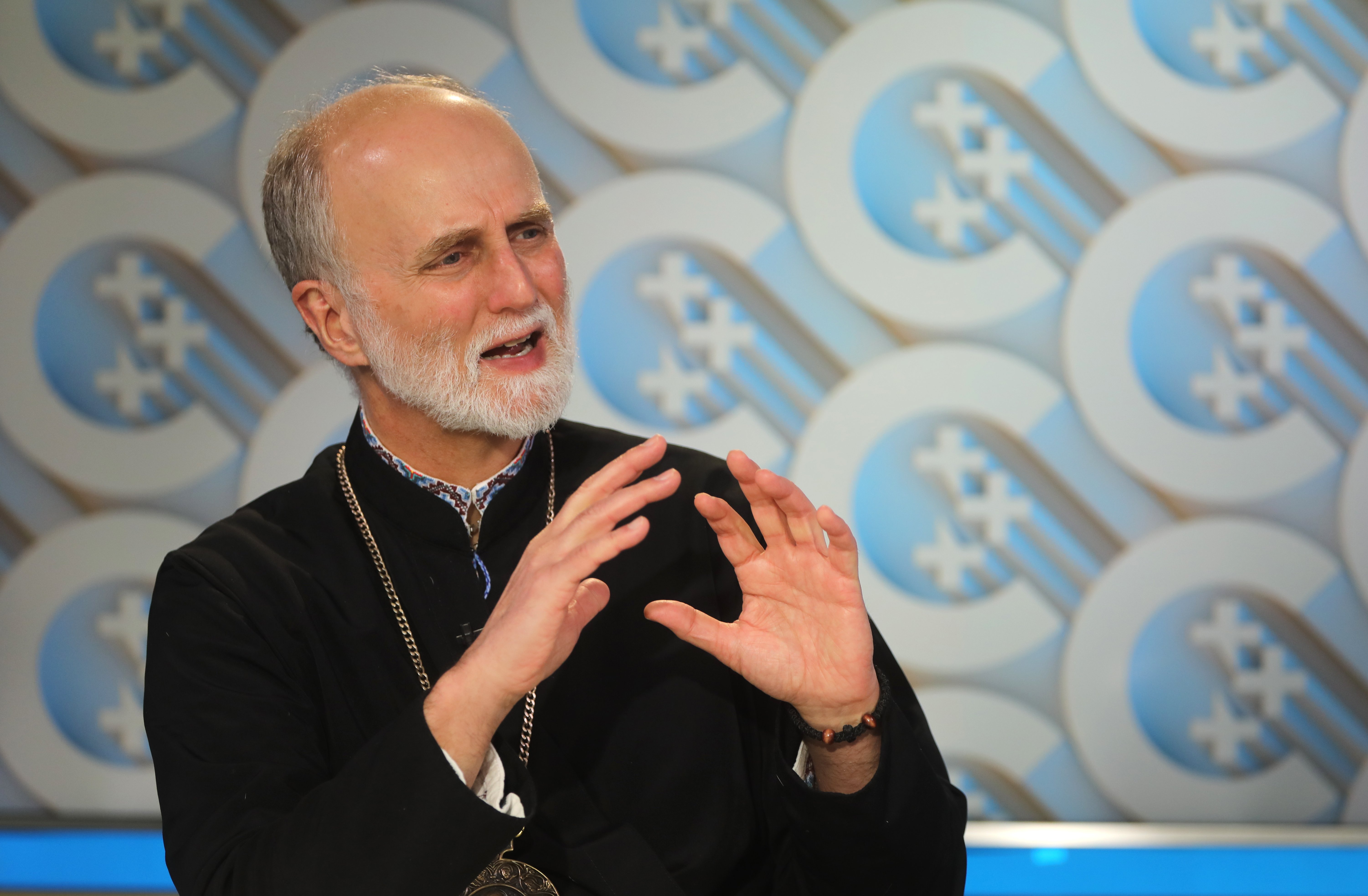 Archbishop Borys Gudziak of the Ukrainian Catholic Archdiocese of Philadelphia gestures during an interview with Catholic News Service at the headquarters of the U.S. Conference of Catholic Bishops in Washington March 14, 2022. (CNS photo/Bob Roller)

WASHINGTON — Russian President Vladimir Putin did not invade Ukraine out of concern that NATO would encroach on his borders, but concern about "the disease of democracy that could spread like a virus, and that's deadly for oligarchies and authoritarian rulers," said the archbishop who serves as a "foreign minister" for the Ukrainian Catholic Church.

Russia needs "Ukraine's territory, its population, its market, its technological capacity .... This country, with its seaports, helps Russia return to its nostalgic colonizing and imperial building," said Archbishop Borys Gudziak, the Ukrainian Catholic archbishop of Philadelphia and the head of external relations for the worldwide Ukrainian Catholic Church.

He said people must understand the invasion was "not a response to a military threat, but it's a response to moral danger. Democracy could spread."

In a wide-ranging interview March 14, Archbishop Gudziak spoke of Putin's ruthlessness, the faith of Ukrainians, and Western leaders' "naivete, blindness, lack of courage and capacity to act (during) 22 years of Putin's rule." He sprinkled the interview with Biblical references such as David (Ukraine) and Goliath (Russia), the sin of Adam, and Herod's massacre of the Holy Innocents.

Archbishop Gudziak spoke of Russia's "devastating air assault" targeting civilians: "a maternity hospital, schools — some 200 schools have been damaged or destroyed; it's hitting churches; tanks are firing at apartment buildings. All of this is documented. The whole world is seeing it. What more is needed? What conscience cannot be moved to defend these innocent civilians?"

The result is a division of families, 3 million refugees, 2 million additional people displaced within Ukraine and billions of dollars of damage to infrastructure, he told Catholic News Service.

"The psychological, social, economic devastation is incalculable," he said. "It will take decades to deal with the trauma."

Putin "has demonstrated a capacity to be utterly ruthless: killing, maiming, destroying civilian populations and civilian objects," he said, referring to the monthlong battle to capture the Chechen capital of Grozny in 1994 and 1995 and the monthlong bombing of Aleppo, Syria, in 2016.

He said Western leaders were realizing too late that Putin could not be trusted. He cited examples of U.S. Presidents George W. Bush, Barack Obama — as a candidate — and Donald Trump misreading Putin. He said they had no understanding of what it took for a young man to join the KGB and stay in it and "foster its legacy" for the 22 years he has been in power. All of this has convinced Putin of the West's weakness, "and so he will push forward in a devastating way."

People think the war began Feb. 24, but it began in March 2014, when Russia annexed the Crimean Peninsula, the archbishop added. "We're into the ninth year of this," he said, and it could have been avoided with more decisive action.

Some people have expressed concern that Pope Francis has not specifically mentioned Russia when speaking out against the war, but Archbishop Gudziak said, "I think people understand who he's talking about, and his statements have been incrementally stronger."

The same day, in a front-page editorial in L'Osservatore Romano, the Vatican newspaper, and in various language editions of Vatican News, Andrea Tornielli, editorial director of the Dicastery for Communication, explained why Pope Francis has not explicitly named Putin and Russia in his condemnations of the war.

"There are those who have accused the pope of 'silence' for not having explicitly named Putin, forgetting that once a war began, the pontiffs never called the aggressor by name and surname, not out of cowardice or an excess of diplomatic prudence, but in order not to close the door, in order to always leave a crack open to the possibility of stopping evil and saving human lives," Tornielli said.

Archbishop Gudziak told Catholic News Service Ukrainians were very grateful to the Holy See, and he wished Pope Francis would "go to Ukraine right now. I think that would save many lives. His unique moral authority could play a role." He noted that Archbishop Sviatoslav Shevchuk of Kyiv-Halych, head of the Eastern-rite Ukrainian Catholic Church, also has spoken publicly of his wish for a papal visit.

The archbishop was interviewed two days before Ukrainian President Volodymyr Zelenskyy was scheduled to address the U.S. Congress. Asked what he would say if he were to address Congress, Archbishop Gudziak said: "Do you not realize that you are sacrificing Ukraine, its children, its women, its churches, its hospitals? Do you have the moral right to do that?

"Why is every inch of NATO territory worth defending? Are human beings on the other side of the border any less worthy of life, justice, liberty, truth?

"Can you muster up half the courage that Ukrainians are showing? Our people are giving everything — their lives, their livelihoods, their homes. And they're fighting for peace in Europe and peace in the world."

Throughout it all, Ukrainians have tried to maintain their faith, with priests celebrating services in private homes or in bomb shelters — he said Ukrainians were getting 5-10 bomb alerts every day.

"The rockets' red glare helps people to pray," he said. In those moments, people realize "our sense of great human autonomy is largely an illusion."

"We're actually seeing great faith, especially in those who are defending the innocent, protecting the hospitals, the refugees. There's no greater love than that when one gives their life for one's friend."