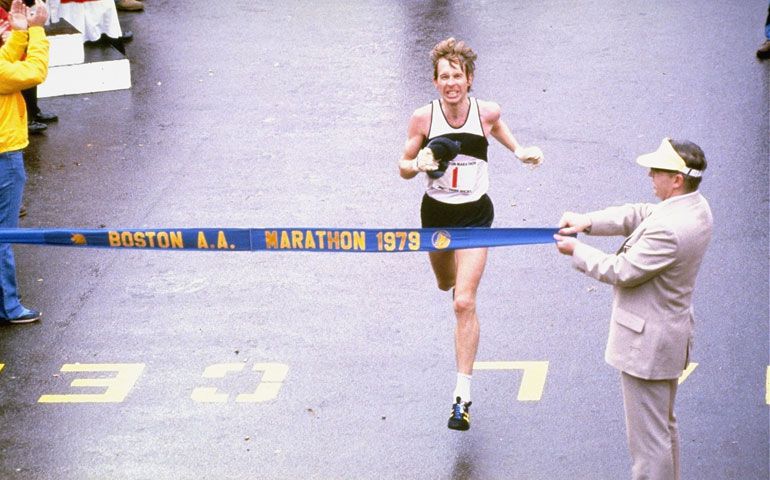 Little of the carnage at the finish line of the mid-April Boston Marathon is enough to erase my cherished memories of the race and its two iconic champions: Johnny Kelley and Bill Rodgers. Few athletes, and even fewer distance runners, are the equal of these two thoroughbreds.

Johnny, who ran the last of his 61 Boston marathons at age 84 in 1992, was a day laborer at the Boston Edison Co. Before and after work, he ran. And ran and ran, through muggy summers and snowy winters. I can verify the latter. In a January early in the 1980s, I stayed with Johnny at his home in East Dennis on Cape Cod. Runner magazine asked me to profile the two-time winner of the Boston Marathon -- 1935 and 1945 -- and seven-time second-place finisher.

Voluble and Irish, and covering as much storytelling ground as he did miles on the road, the tales of past races poured out to near midnight. About then, he showed me to my bedroom as he went to his down the hallway.

Sleeping was hard. Windows rattled from a fierce winter storm. Well before dawn, it was another noise: Johnny banging around the house, suiting and shoeing up for his morning run, the snow be damned. At breakfast afterward, thawing, he confessed to being a slacker -- putting in only 5 miles.

In 1993, the year after Johnny's final Boston Marathon and after the last of his 108 marathons in all, a life-sized statue of him was dedicated at the foot of Heartbreak Hill on the 26.2-mile course near the Newton City Hall. As he often did before and after his races, he sang "Young at Heart" at the dedication, with the crowd of 600 joining in. Four years before his death at 97 in 2004, Runner's World magazine hailed Johnny as "Runner of the Century." It was estimated that his total road mileage equaled three times around the globe.

Bill Rodgers, dubbed "Boston Billy" by the hometown scribes, was king of the road from 1975 to 1980. Those years, he won both the Boston Marathon and the New York City Marathon four times. In all, he ran 59 marathons, winning 22. He was the favorite to win a gold medal in the 1980 Olympics in Moscow, but Jimmy Carter ordered a boycott of the games. The reason? To protest the Soviet Union invasion of Afghanistan. Twenty-one years later, the United States invaded.

I came to know Rodgers during his peak years in the 1970s, when asked by The New Yorker magazine for a 5,000-word piece on him. We met in Washington in early April 1978, when he was using the 10-mile Cherry Blossom race as a tune-up for Boston two weeks later. He won both races handily. I found Rodgers instantly likeable, free of pretensions and certainly free of the swagger found in some champion athletes.

A few hours after his Cherry Blossom win, he needed more mileage and invited me to run for a hour or so. Like Johnny Kelley, his frame was lean and his footfalls light in frictionless motion. In his marathon wins, Rodgers kept to a pace of sub-five-minute miles but now, graciously accommodating turtle-like me, he put in low-gear seven-minute miles.

Rodgers graduated from Wesleyan University in Middletown, Conn., in 1970 with a degree in sociology, and later earned a master's from Boston College in special education. Draftable for the Vietnam War, he petitioned and received conscientious objector status and did alternate service at Peter Bent Brigham Hospital in Boston. "Vietnam," he told me, "was a war that I felt was instigated by the United States and no way was I going to contribute. ... The best way to stop a war is don't show up. Everybody should do that."

Thanks to Johnny Kelley and Bill Rodgers, I decided to start going the distance -- finishing three Bostons and four New Yorks the same years Rodgers was winning them, and adding a dozen more marathons in Washington and Baltimore. Getting carried away, I once went for a run where it all began -- the tiny Greek town of Marathon, 25 miles east of Athens.

A lot of us runners end up cardiovascular wonders but orthopedic wrecks. So obeying the gods who protect fibulas and tibias, it's now just a few 10-mile races a year. Sometimes I imagine Johnny Kelley running next to me and I sing with him "Young at Heart."

Accompany or argue: Pope contrasts with Bishop Barron on evangelization