Four new cardinals had to keep news secret from synod 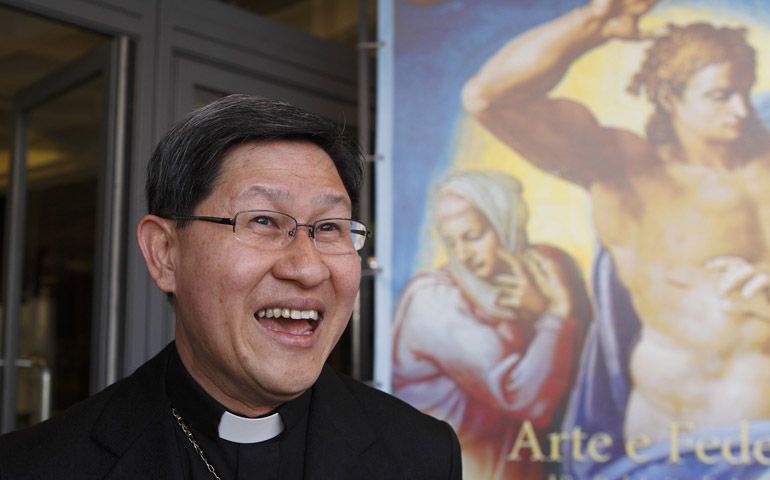 Cardinal-designate Luis Tagle of Manila smiles during an interview Wednesday after being named a cardinal at the Vatican. (CNS/Paul Haring)
This article appears in the Synod of Bishops 2012 feature series. View the full series.

Vatican City — Four of the six new cardinals announced Wednesday by Pope Benedict XVI were participating in the world Synod of Bishops at the Vatican and had to keep their impending appointments secret as they participated in the synod's small-group work that morning.

The appointment of new cardinals was not announced to synod members, so those who did not have smartphones or tablets or a friend with one found out only during the synod's lunch break.

Between slaps on the back and warm handshakes in the synod hall, Rai told Catholic News Service he was told at 5 p.m. Tuesday of the pope's intention to make him a cardinal, and he was sworn to secrecy until noon the next day.

Thottunkal started to tell CNS the reasons why his nomination was such an honor, but he was interrupted by Rai grabbing both his hands and saying, "Dear, dear brother."

When others began congratulating the patriarch, Thottunkal continued his brief interview, saying, "For our church, it's a great honor from the Holy See, recognizing our apostolates as well as our missions in India and all over."

The cardinal-designate said the appointment also is an honor for India: "It's great culture and people," and the Vatican recognizes "the great unity in diversity of our country."

Tagle said a bishop's job often involves keeping secrets, so spending the morning with other synod members and not breathing a word about the news was not a huge challenge.

He told CNS that Cardinal Tarcisio Bertone, Vatican secretary of state, informed him of the pope's decision just before 5 p.m. the previous evening.

"Listening to the text of the pope's letter being read out to me, I also felt like -- here it comes," he said, fighting back tears, -- "it felt like someone far greater than I am is here. Very near."

He told Vatican Radio the announcement was "a spiritual experience for me," and that his initial reaction was "to respond with the words of the prayer before Communion: 'I am not worthy that you should enter under my roof,' but I felt that someone greater than me has come to call me."

The month of October, which is the month of the rosary, "is big for me," he told CNS. He was informed in October 2001 that he would become a bishop and was told he'd be transferred to Manila in October 2011. "And now it's October again," he said, and began laughing.

When the bell rang for the synod's work to begin again at 4:30 p.m., Vatican security escorted reporters out. CNS did not have a chance to speak to Onaiyekan.

U.S. Archbishop James M. Harvey, the 63-year-old prefect of the Papal Household, and Colombian Archbishop Ruben Salazar Gomez of Bogota, 70, were the two new cardinals who were not participating in the synod.

A global crop of cardinals; Syria; Vatileaks; and possible popes