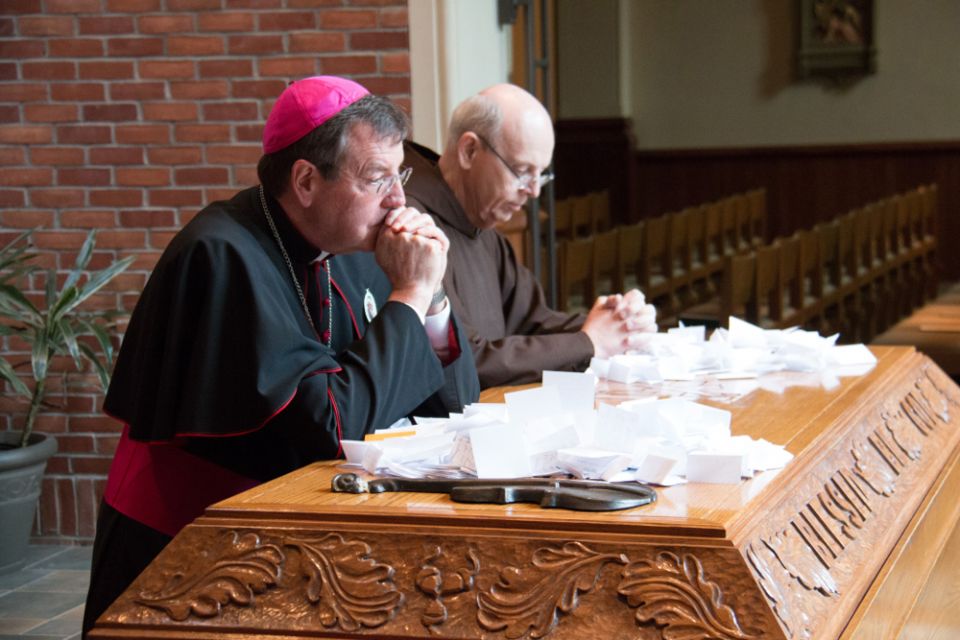 Detroit Archbishop Allen H. Vigneron and Capuchin Father Michael Sullivan pray May 4 at the tomb of Father Solanus Casey before the announcement of the friar's beatification at St. Bonaventure Monastery in Detroit. (CNS/courtesy Archdiocese of Detroit)

DETROIT — The remains of Fr. Solanus Casey were exhumed Aug. 1 as part of the canonical process that precedes the saintly Capuchin Franciscan friar's beatification Mass in November.

The purpose of the exhumation, according to the Capuchin Province of St. Joseph and the Archdiocese of Detroit, was to both officially identify the body and to collect relics that will be used to venerate Casey after he is beatified Nov. 18.

Detroit Archbishop Allen Vigneron presided over the private exhumation service, which was limited to a handful of individuals, including three medical professionals who were on hand to examine the remains and report on the condition of the body.

"Presiding at the process for opening the tomb of Fr. Solanus and confirming the identity of his earthly remains was a time of significant personal prayer for me," Vigneron said afterward. "I especially give the Lord Jesus thanks for the gift of Father's service to our community, above all to the least among us, and for his example of loving our neighbor with nothing less than the sacrificial charity of Christ himself.

"This day is a clear milestone on our path to Nov. 18 and Fr. Solanus' beatification at the Mass to be offered in Ford Field," he said. The stadium in downtown Detroit will be configured to accommodate 60,000 people for the ceremony.

"God is sure to give great blessings to all of us through this confirmation of Fr. Solanus' holiness. For this, 'let us thank God ahead of time,'" the archbishop said, repeating Casey's oft-quoted refrain.

Capuchin Franciscan Fr. Michael Sullivan, provincial minister for the Capuchin Province of St. Joseph, was among the few Capuchins present for the solemn occasion.

"It was an honor and a joy for me to be prayerfully present," Sullivan said. "For me it was an occasion to pray for all the friars, especially the sick and those who minister here in Detroit as well as for vocations to our way of life. I am deeply grateful for all the ways God continues to work through the presence and ministry of the Capuchins."

The Aug. 1 ceremony marks the second time Casey's body has been exhumed — the first was in 1987, when his remains were moved from the friars' cemetery to their current resting place in the north transept of the St. Bonaventure Monastery chapel.

The exhumation also took place one day after the celebration of the 60th anniversary of Casey's death July 31, 1957.

A priest known for his great faith, humility and compassion and for his ministry as spiritual counselor, Casey worked for two decades in the Harlem section of New York City.

In 1924, he was transferred back to Detroit, where he joined the Capuchin order, and began working as the porter — or doorkeeper — of St. Bonaventure Monastery. He also helped establish the Capuchin Soup Kitchen in 1929 to feed the hungry during the Great Depression, a work that continues in Detroit today. He was declared venerable in 1995.

Exhumation of the body of a sainthood candidate is part of the formalities of the beatification process and includes very strict guidelines, said Capuchin Franciscan Fr. Larry Webber, who along with Br. Richard Merling, also a Capuchin Franciscan, who has served as vice postulator of Casey's sainthood cause since 2012.

After permission was received from the Vatican Congregation for Saints' Causes — as well as local civic officials — to exhume the body, the metal casket in which Casey was buried was raised from its resting place the evening of July 31, but remained unopened until the next morning.

Leading a prayer, Vigneron broke the wax seal that was left on Casey's casket when it was last opened under then-Archbishop Edmund Szoka, and two witnesses who were present at the 1987 exhumation helped verify the body. Medical examiners were then asked to report on its condition.

Church officials then oversaw the collection of first- and second-class relics — including pieces of bone, hair or clothing — which were secured inside vials to be sent to Rome, where they will be cataloged, authenticated and prepared for distribution. The body was then reinterred in a new casket, along with an authentication document signed by those present, before Vigneron led a closing prayer.

Webber called it a "very powerful spiritual experience" to be able to see and venerate the remains of Casey.

"Many mixed feelings filled the hearts of our Capuchin community today," Webber said. "We are well aware that Fr. Solanus is now part of something greater than just our Capuchin community. He belongs to the whole church, and we pray that his eventual canonization might make him another model of holiness in following Jesus Christ in the universal church."

Bishop in Peru, who had been ordained for Alabama diocese, dies at 83

The Francis Effect podcast: War in Ukraine, the pope's student dialogue, and Lent