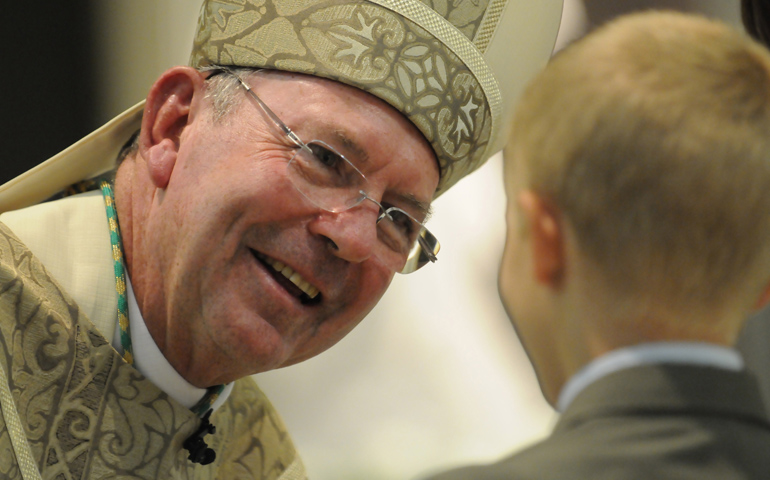 Bishop Joseph McFadden is greeted by a young boy who was one of the representatives of the community who welcomed him during his 2010 installation Mass at St. Patrick's Cathedral in Harrisburg. (CNS/The Catholic Witness/Emily M. Albert)

Bishop Joseph P. McFadden of Harrisburg died Thursday in Philadelphia, where he was attending a meeting of Pennsylvania's Catholic bishops.

According to a Facebook posting from the diocese, McFadden awoke at the rectory where he was staying and felt ill. He was taken to a hospital and was pronounced dead at about 7:40 a.m.

No cause of death was immediately available. He was 65 and had been the bishop of Harrisburg for three years. He was also chairman of the U.S. bishops' Committee on Catholic Education.

Bishop McFadden was born May 22, 1947, in Philadelphia, the only boy of three children. He went to Catholic schools his whole life.

While studying at St. Joseph University in Philadelphia, he played on the freshman basketball team and started coaching basketball, including his high school alma mater, St. Thomas More High School for Boys.

Upon graduation from St. Joseph, he took a teaching job at West Catholic High School for Boys, and coached basketball and baseball teams there. He entered the seminary in 1976 and was ordained for the Archdiocese of Philadelphia in 1981.

In 1982, he was named administrative secretary to Cardinal John Krol of Philadelphia, a post he held until 1993. From 1993 to 2001, he was president of Cardinal O'Hara High School in Springfield, Pa.

In 2001, McFadden was named pastor of St. Joseph Parish in Downingtown, where he served until he was appointed an auxiliary bishop of Philadelphia in 2004. He served in that capacity until taking the reins of the Harrisburg diocese in June 2010.

Also in January, he issued a one-page report on the implementation of the 1990 Vatican document "Ex Corde Ecclesiae" ("From the Heart of the Church"). "Bishops reported that they believe our institutions of Catholic higher education have made definite progress in advancing Catholic identity," the report said. "The relationship between bishops and presidents on the local level can be characterized as positive and engaged, demonstrating progress on courtesy and cooperation in the last 10 years."

At his 2010 installation Mass as bishop of Harrisburg, McFadden said, "I ask you to pray for me that I may be a good shepherd after the heart of Jesus. Pray that together we may be good builders of the kingdom of God here in Harrisburg."

No funeral information was immediately available.

Governance of the diocese passes to the diocesan College of Consultors upon McFadden's death. They have until May 10 to elect an administrator who will be in charge of the day-to-day operation of the diocese until a new bishop is appointed.

"I was shocked and deeply saddened" to learn of McFadden's death, said a statement Thursday from Archbishop Charles Chaput of Philadelphia. "I am grateful that I had the opportunity to be with him over the last few days," Chaput added, "and spend time in conversation with him."