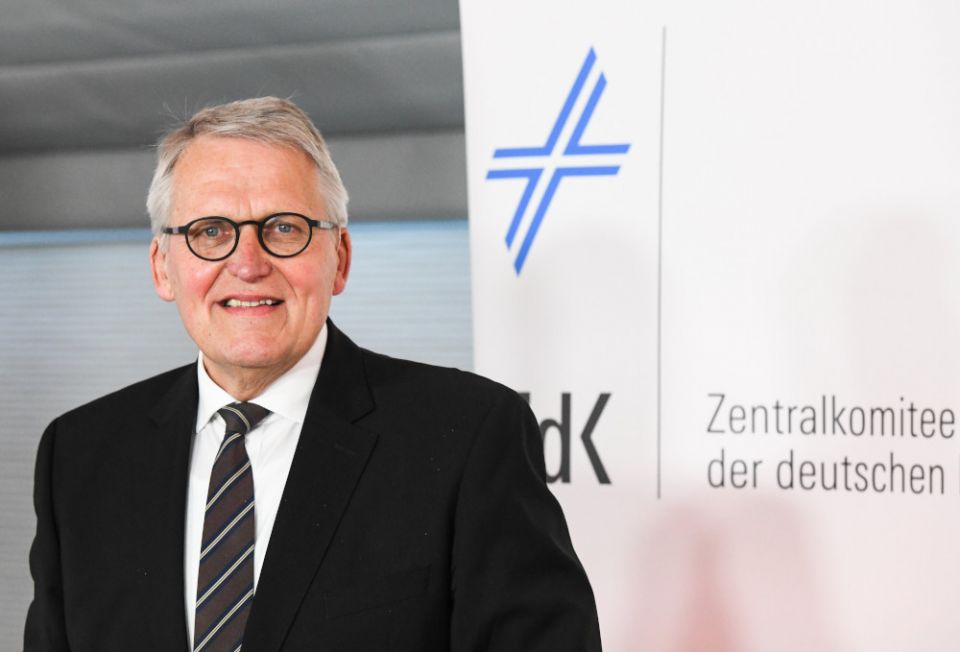 Thomas Sternberg, president of the Central Committee of German Catholics, is pictured during the organization's plenary assembly in Bonn, April 23, 2021. (CNS photo/KNA/Harald Oppitz)

BONN, Germany — Thomas Sternberg, 69, president of the Central Committee of German Catholics, announced April 23 he will not seek reelection to the post in November.

Sternberg assumed the highest office of Germany's Catholic lay organization in 2015. The German Catholic news agency KNA reported the organization will be forced to find new leadership in the midst of some upheaval.

The organization is currently in the middle of dealing with the issue of clergy sexual abuse in the church. Catholic laypeople in the Archdiocese of Cologne recently called for a local synod to address the ongoing crisis surrounding how abuse was handled in Germany's most populous diocese.

However, lay Catholics also have made strides: The German bishops' conference elected a woman as general secretary. Beate Gilles, a 50-year-old theologian, became the first noncleric and woman to head the bishops' secretariat. She will take up her post July 1.

Next January, the organization's secretariat is set to move from Bonn to Berlin in a bid to be closer to Germany's political decision-makers.

Sternberg is certain that the church in Germany stands on the brink of dramatic change and must redefine its role, KNA reported. When he sought the presidency in 2015, the man who once trained as a baker used the image of leaven to describe the church's laity.

On several occasions, he called for a Third Vatican Council to be held — among other reasons to advance the role of women in the church. He backs the idea of opening the position of deacon to women and urges greater distribution of power and administrative jurisdiction in the church. KNA reported he has vehemently criticized March 15 clarification by the Vatican Congregation for the Doctrine of the Faith that any form of blessing of a same-sex union is "illicit."

The Synodal Path — a process of reform devised by Sternberg, Munich Cardinal Reinhard Marx and Jesuit Fr. Hans Langendörfer — now finds itself facing increasingly polemical sharpness, with the founders withdrawing, one after the other, reported KNA. Contributing to this have been the oftentimes shrill arguments on social media.

Speaking to the mid-April meeting of the Central Committee of German Catholics, Sternberg said: "I would like to resolutely oppose a polarizing, often polemical and hysterical style of debate such as is promoted by the not-so-social social media."

Poll: US believers see message of change from God in virus

Rights of Nature a natural fit for women religious