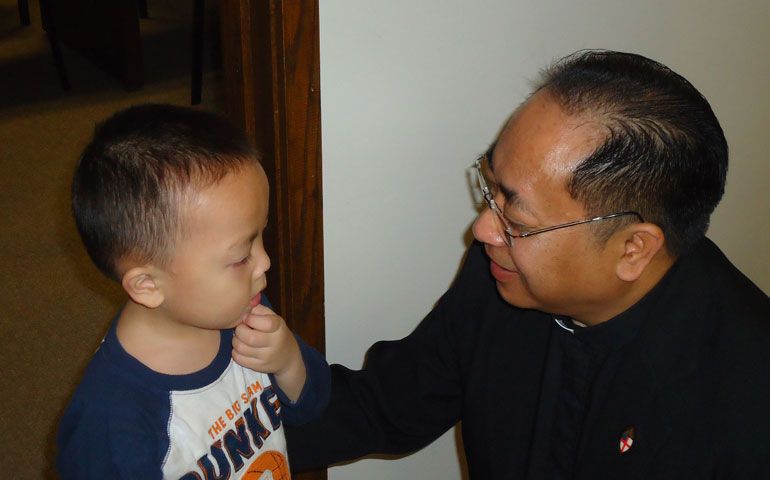 St. Paul, Minn. — In June 2013, Toua Vang became the first Hmong man in the world to be ordained an Episcopal priest, and is now pastor of the only Hmong-majority Episcopal church anywhere.

His roots are in Catholicism, but the Episcopal church offered an option for non-celibate priesthood. "I come from the Hmong culture, and men are expected to have a family," he said.

Vang, 47, is one of hundreds of Hmong who began attending Holy Apostles Episcopal Church in St. Paul in 2005. The church was about to close, with only about 60 members remaining. Then 700-plus Hmong, making up 78 families who were searching for a new place to worship after leaving the nearby St. Vincent de Paul Catholic Church, found a home at Holy Apostles. They were welcomed and quickly became a part of church leadership.

"There was a power struggle and division [at St. Vincent de Paul], and many people had decided to move on," Vang said, adding that the struggle affected the whole congregation, dividing it into a few groups, with the larger group moving to Holy Apostles.

"The Hmong, even in this country, still function as communal people with elders or community leaders giving guidance and assist with disputes among the Hmong people," Vang said. "The small group remains at St. Vincent de Paul. Some merged into other denominations and some returned to practice animism, the Hmong traditional religion."

Growing up, his parents fought in the "secret war" against communist forces, Vang said. His parents converted to Catholicism when they were newlyweds, but there was no church building, only a meeting place in an open space in the heavily wooded mountains, he said. He lived as a boy in a refugee camp for four years. The experience gives him plenty of topics on which to preach, sometimes at weekly Hmong-language services.

He and his family faced bombs and guns, starvation and disease. But through it all, Vang said, he prayed and learned to forgive.

"We were fleeing the communists and had to keep moving at night," he said. "I believe everything happens for a reason, and my family members and I were saved every time."

"I feel blessed on this life journey. Faith has brought us there," he said. A near-death experience also was crucial to his parents' choosing Catholicism. His mother, a newlywed, was in a coma, and native shamans were brought in, but could not help her. Then a French missionary priest prayed extensively for her, and she awakened converted. His parents then raised their 10 children in the faith.

In 1978, Vang was granted settlement in the United States and moved to Denver, then later to St. Paul. He volunteered in a local Catholic church and was president of a large youth association of Hmong Catholics until 1993.

"I felt a call [to priesthood] at a very young age but didn't immediately respond," Vang said. After the Hmong were divided between the parishes, he felt it more strongly.

"I had a love to read the Bible more and more, and I carried it with me," said Vang, who worked for years as a deputy clerk in the local court system before he came to work for the church.

In recent years, Vang became senior warden -- the equivalent of the Episcopal church's board chair -- and then received financial support, including funding from his home parish, to attend the Virginia Theological Seminary in Alexandria.

It was the next closest thing to Catholicism. "There was a different vision of Christ, and of Scripture and tradition," Vang said, adding that there is also divergence on celibacy, "but the call to pursue holy orders and the faith remain the same."

He says that God wants him to live among the poor and serve them, and adds that he would like to use his vocation to become a missionary in Asia. Now that he is ordained as an Episcopal priest, there are no plans to go back to Catholicism and become a priest with a family, even though under current rules that would be an option.

"We are always interested in helping people find their gifts, carry them forward and continue to discern them," said Brian Prior, bishop of the Episcopal church in Minnesota. Prior added that Vang will continue to serve his fellow Hmong. Holy Apostles and the larger Hmong community have given support and now share in the achievement, "since he is one of theirs," Prior said.

The local Hmong have not become "fully Episcopal," because they still retain a lot of their native traditions, but the people are a vital part of that church, Prior said.

"This is a way that it really rises to the top, not only for Fr. Vang, but also for his people, as they continue forming and shaping one another," Prior said.

He noted the strong elder tradition in the Hmong culture, and that the St. Paul area has one of the largest Hmong populations in the country.

As a priest, Vang "paves the way, and [other Hmong] will follow, not only in Minnesota but elsewhere, also," Prior said.

Parishioners at Holy Apostles say they hope to see not only that, but also some Hmong Catholics as priests in their lifetime. They take a sense of pride in that they've made a bit of history, and say that Vang's understanding of the Hmong culture helps him serve.

Betty Strong, a member of the discernment committee for Vang's ordination and member of the shared ministry team at Holy Apostles, said, "I love him to death."

Strong added that when she was going through the discernment process, and starting to work with Hmong families, she was challenged by the questions they asked about why certain things are done by the church, and not being satisfied with pat answers.

Vang also says that he sometimes is caught between cultures, but the parishioners he serves "have been excellent, welcoming and warm."

"I feel hopeful and strong, but at the same time expect challenges," Vang added.

[Joe Winter is a freelance writer who lives in Hudson, Wis.]

Inspired by American missioner, Hmong priest walks in his mentor's footsteps in the US