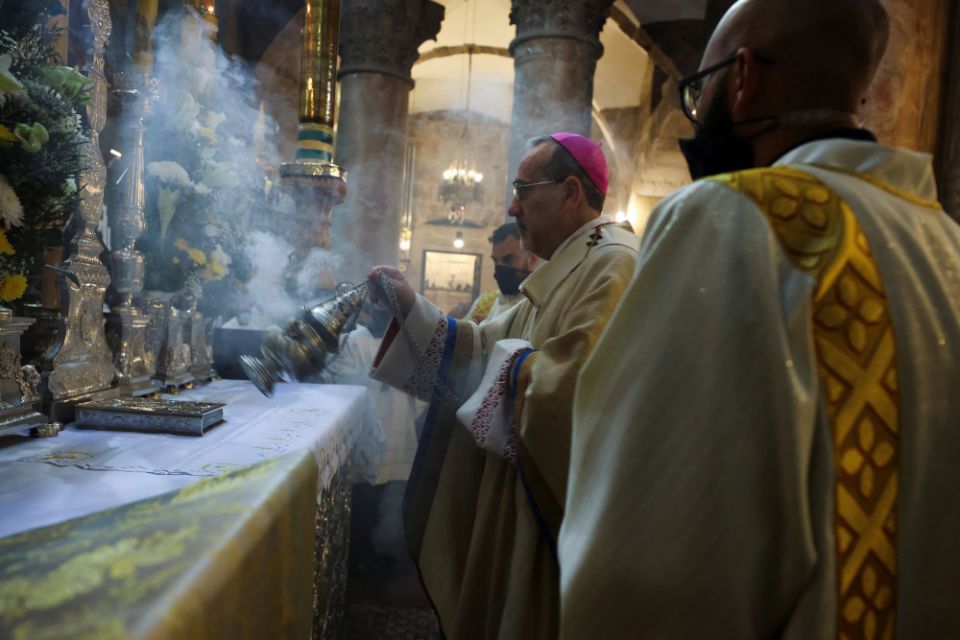 Archbishop Pierbattista Pizzaballa, Latin patriarch of Jerusalem, burns incense during Holy Thursday Mass in the Church of the Holy Sepulcher in Jerusalem's Old City April 1, 2021. The archbishop requested that the May 30 Mass collections from all parishes in the diocese be donated in their entirety to Gaza's Holy Family Parish as a sign of solidarity after Israeli airstrikes. (CNS photo/Reuters/Ammar Awad)

Jerusalem — Archbishop Pierbattista Pizzaballa, Latin patriarch of Jerusalem, requested that the May 30 Mass collections from all parishes in the diocese be donated in their entirety to Gaza's Holy Family Parish as a sign of solidarity following airstrikes from Israel.

"In the aftermath of the tension and conflict we have recently experienced, let us turn our hearts and gaze to the needs of our brothers and sisters in Christ, especially in Gaza and in places severely affected by the recent exchange of rocket firing for 11 days," Pizzaballa said in his May 25 statement.

The tiny Gaza Catholic community consists of 133 people — including a recently born baby. There are just under 1,100 Christians among the 2 million Muslim Palestinians in Gaza.

Pizzaballa noted that following the "deadly clashes and bombings" the situation in Gaza had worsened, as the residents are also struggling with COVID-19, which continues to spread in the area.

"I ask you to share some of your resources to alleviate the sufferings of our Christian faithful in Gaza," he said.

On May 21, a cease-fire went into effect, ending the fourth major round of violence between the two in 10 years. According to the Hamas Ministry of Health, at least 243 Palestinians were killed, including 66 children. It does not differentiate between civilians and gunmen deaths. Hamas is considered a terror group by the United States and Israel.

Twelve Israeli civilians — including two children — and one soldier were killed in the worse round of fighting between Israel and Hamas in six years.

Msgr. Hartman dies; was half of TV's 'God Squad,' had headed Telecare

Panel: Catholics, white Americans must reckon with their role in violence against Asian women