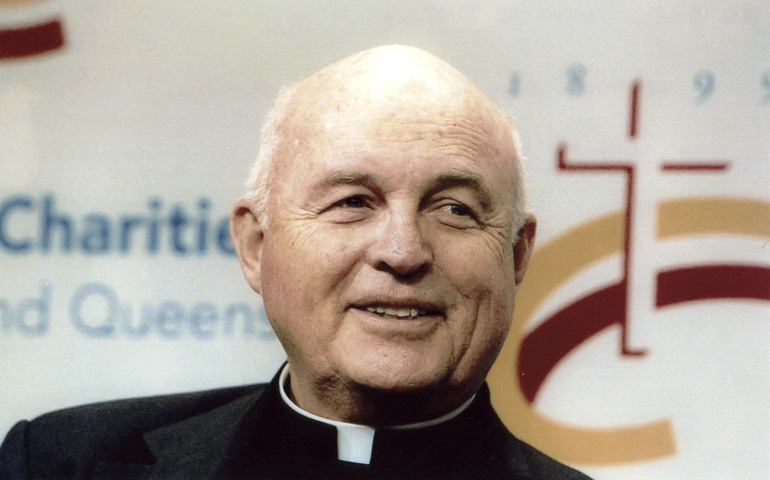 Retired Auxiliary Bishop Joseph Sullivan of Brooklyn, N.Y., whose work on behalf of the poor for Catholic Charities in Brooklyn and Queens earned him national recognition, died June 7 as a result of injuries he suffered in a May 30 car accident. He was 83. (CNS file photo)

Brooklyn, N.Y., native Joseph Sullivan was never inducted into the College of Cardinals. The pope did not give him the responsibility of serving a local church as its chief shepherd.

Yet the retired auxiliary bishop exerted wide influence over the U.S. church for decades, being appointed first by the bishops' conference as its representative to the organization responsible for the church's exhaustive charity efforts, then to the organization representing its wide-ranging health care apparatus.

All the while, Sullivan served a stint as chairman of the bishops' domestic policy committee and helped author several major national teaching documents on the economy, war and peace, and charity.

"In some ways, his not being an ordinary, having his own diocese, left him some great flexibility to serve the wider church," said Jesuit Fr. Fred Kammer, who served from 1992 to 2001 as the head of Catholic Charities USA, where Sullivan served as the bishops' episcopal liaison from 1982 to 2000.

Sullivan, who was appointed Brooklyn's auxiliary in 1980 by Pope John Paul II and retired in 2005, died Friday after suffering serious injuries in a May 30 car accident. He was 83.

Before serving at the national level for Catholic Charities, which describes itself as the nation's largest voluntary human service network, Sullivan served as executive director of the Brooklyn diocese's Catholic Charities office from 1968 to 1979.

"He was really one of the heroes of the Catholic Charities movement in the 20th century," said Kammer, who now heads the Jesuit Social Research Institute at Loyola University, New Orleans.

The mixture of the local and national service, Kammer said, meant Sullivan was "very well respected by the body of bishops."

"When Joe spoke out on an issue involving social justice or labor or Catholic Charities, people listened. That's why he was able to play that important role for the national organization for so long," Kammer said.

Bishop Thomas Gumbleton, the retired auxiliary of Detroit who attended bishops' meetings with Sullivan through the years, agreed.

"When he spoke, his words would carry weight," Gumbleton said. "People would listen, and often, if they needed persuasion one way or the other, he was one who could persuade them."

In 1995, Sullivan, Gumbleton and 38 other bishops coauthored a document asking their peers to take a less subservient, more proactive stance in relationship to the Vatican.

The letter the 40 bishops cosigned in 1995 said many issues facing the church -- including "women and equality in the church," the annulment process, contraception, "the kind of candidates being attracted to the priesthood" and the ordination of married men -- were not being addressed openly.

Explaining the document now, Gumbleton said the bishops felt the Vatican was "taking away the possibility of conferences of bishops speaking out on issues of concern within their country."

"That was a big concern," he said. "[Sullivan] was one of the ones who spoke out against that kind of stifling of pastoral letters."

Gumbleton noted that with Sullivan's death and the December death of retired Richmond, Va., Bishop Walter Sullivan (no relation), "the progressives from years ago are all disappearing."

During his time at the bishops' conference in the 1980s as chairman of the bishops' domestic policy committee, Joseph Sullivan helped author the bishops' 1983 pastoral letter on peace, "The Challenge of Peace: God's Promise and Our Response," and their 1986 letter on the economy, "Economic Justice for All."

He also chaired an ad hoc committee in the 1990s that produced a pastoral letter on charity, "In All Things Charity: A Pastoral Challenge for the New Millennium," approved by the bishops in 1999.

Following his work as the bishops' liaison to Catholic Charities, Sullivan served as the prelates' official liaison to the Catholic Health Association from July 2000 until December 2008.

The association comprises more than 600 hospitals and 1,400 long-term care and other health facilities in all 50 states. It describes itself as the largest group of nonprofit health care providers in the nation.

Sullivan served on the organization's board from 1984 to 1990 and was its chairperson from 1990 to 1991, said Fred Caesar, who serves as a special assistant to its president, Charity Sr. Carol Keehan.

Keehan said in an interview she remembered Sullivan most for his kindness, humor and desire to speak for the poor.

Among other gifts, Keehan said, Sullivan also knew when to laugh "in order to bring joy to even the most ragged moments." She also remembered sitting beside the bishop during a meeting where attention unexpectedly turned toward the sexual abuse of minors by clergy.

The abuse, Keehan said, had "broken his heart." By the end of the meeting, she said, Sullivan had written a poem that she called a "cry of anguish" about the matter.

Sullivan also supported the work of Pax Christi USA, a nonprofit that bills itself as the national Catholic peace movement.

"In my experience doing program work, he was always very supportive -- signed onto a number of our statements, was always willing to include our perspective in things," said David Robinson, who served as Pax Christi's executive director from 2001 to 2011.

"He was a strong proponent of justice and peace. And I think he infused his diocesan work with that spirit."

Following his retirement from official duties in 2005, Sullivan spoke several times publicly about the need for the nation's prelates to speak compassionately to Catholics who were struggling with questions of sexual identity.

At a 2006 conference of the National Association of Catholic Diocesan Lesbian and Gay Ministries held in Brooklyn, Sullivan said gays, lesbians, bisexuals and transgendered persons "have to be brought into full participation in the life of the church."

Sullivan also called the tendency by some church leaders to avoid homosexual Catholics "unkind," arguing that "for a bishop to be an effective teacher, he must be in the mix. He must be like Jesus -- with the people."

Francis DeBernardo, executive director of the LGBT Catholic ministry group New Ways Ministry, wrote in a blog post Tuesday that Sullivan was also one of two bishops who traveled to the group's national symposium in 2007 despite a request from the Vatican's Congregation for the Doctrine of the Faith not to take part.

"I think that 'in a better church,' we would have more bishops like Bishop Sullivan, who was not afraid to take a minority position in the defense of justice," DeBernardo wrote. "Catholics who support LGBT equality and justice now have a new saint to whom we can pray."

Sullivan was ordained a priest in June 1956. He held master's degrees in social work and public administration from Jesuit-run Fordham University in New York and public New York University, respectively.

John Paul II named Sullivan an auxiliary bishop at the same time as two other Brooklyn priests, now-retired Auxiliary Bishop Rene Valero, who remained in Brooklyn, and the late Cardinal Anthony Bevilacqua, who went on to head the Philadelphia archdiocese.

He is survived by six siblings and more than 100 nieces, nephews, grandnieces and grandnephews.

In 1989, NCR asked for his prayer for the U.S. church on the 200th anniversary of the founding of the first U.S. diocese. Sullivan responded:

"That the people of God in the United States will grow in holiness, will witness personally and communally to God's unconditional love for his people revealed in Jesus Christ and will have a penetrating influence on American culture through it preferential option for the poor, enabling the United States to be a just and compassionate society, contributing to a just and peaceful world."