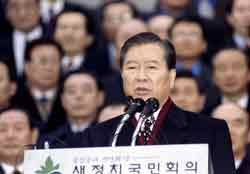 The cardinal said Kim, the 2000 Nobel Peace Prize recipient for his efforts at helping North Korea, had dedicated his life to promoting human rights and the democratization of South Korea and had worked for peace on the Korean peninsula.

Cheong said Kim forgave his political foes despite the persecutions he suffered, including threats to his life.

The cardinal also praised Kim's faith, quoting him as saying, "With the knowledge that Jesus was crucified for humanity, I could overcome all hardships and trials."

The Rev. Kwon Oh-sung, secretary of the National Council of Churches in Korea, said the former president had established human rights and peace as basic values in society. Rev. Kwon said he hopes South Koreans will build on Kim's achievements.

Kim was exiled twice in his life -- he spent 1982-85 in the United States -- during military dictatorships in South Korea. He survived two assassination attempts in the 1970s and had a death sentence commuted in 1981. He was freed in 1982 after requests for a pardon from the international community and Pope John Paul II.

Kim was elected as the country's 15th president in 1997 and served for five years beginning in February 1998.

He was baptized in 1956 when he was a young politician -- his baptismal name was Thomas More -- and he often spoke about his faith publicly.

One of those times was July 4, 1999, when he visited the U.S. to receive the Philadelphia Liberty Medal.

"I have had a lifelong pilgrimage toward freedom," he said. "Along the journey certain forces have sustained me. The first is the Christ I believe in. He gave his life upon the holy cross; he taught us how to be free in spirit. The cross was my training toward freedom."

In an interview with UCA News in 1993, he said that "all my hard trials in the past -- imprisonment, frequent detentions, torture and forced exiles -- happened in the process of God's redemptive work, and in this sense, I have also participated in God's salvation."

He said Christ saved his life when he was abducted by a South Korean spy agency in Tokyo in 1973 and faced the prospect of drowning.

Kim had many ties to the United States, including serving as a member of the board of directors at La Roche College in Pittsburgh in the 1990s.

Insights from those who've left the fold

The sky is falling and media help it fall