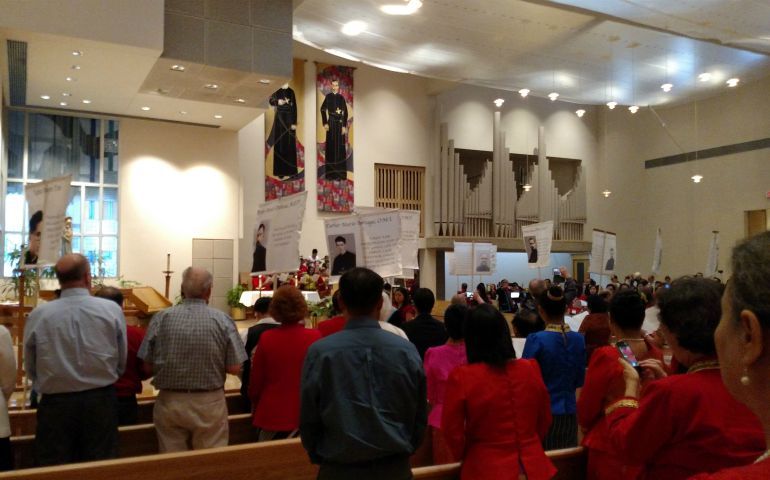 Celebrants paraded photos of the 17 martyr photos before the beginning of Mass celebration. (Peter Tran)

Belleville, Ill. — Some 350 Hmong, Kmhmu, Lao and Karen Catholics gathered here to relive and celebrate the lives of the 17 martyrs of their native country Laos with gratitude and in thanksgiving for their exemplary lives of faith.

Retired Archbishop Roger Schwietz of Anchorage, Cardinal-elect Ling Mangkhanekhoun, apostolic vicar of Pakse and administrator of Vientiane, and Msgr. Tito Banchong Thopanhong, administrator of Luang Prabang, also attended the June 17-18 thanksgiving celebration of the 17 martyrs of Laos at the National Shrine of Our Lady of the Snows, in Belleville, Illinois. A number of living witnesses — friends and family members of the martyrs — also attended.

The 17 martyrs, also known as "Joseph Thao Tien and his 16 companions," were beatified on Dec. 11, 2016, in the Sacred Heart Cathedral in Vientiane, Laos' capital, by Filipino Cardinal Orlando Quevedo of Cotabato. On the same day, Pope Francis, addressing the crowds at the Angelus at St. Peter's Square, said, the "heroic fidelity to Christ" of the 17 martyrs in Laos is "an encouragement and an example for missionaries, and especially for catechists, who in missionary lands carry out a valuable and irreplaceable apostolic work, for which the whole church is thankful."

At the celebration at the Our Lady of the Snows Shrine, Oblate Fr. Roland Jaques said it took him 14 years and more than 1,000 pages of documents to bring these French and Italian missionaries, Lao and Kmhmu catechists, and lay leaders to become blessed in the Roman Catholic Church. Jacques, the postulator for the cause for beatification of the martyrs of Laos to Rome, said he went all across Laos to collect testimony of the living witnesses. He also searched through archives in France to research these almost-forgotten people.

Ling, who knew many of these martyrs, said these 17 men were the "ancestors of our faith." Ones cannot be martyrs without first being the people of the faith, he said. The celebration is about gratitude for the faith of the ancestors.

Recalling the work of collecting the living testimony of the martyrs, Jacques summarized that the story of the life and death of the 17 men took place during the turmoil of world history which, after World War II, saw nations of East and Southeast Asia fall into the hands of communism. These men heroically remained faithful to their pastoral assignments, faithful to the end to Jesus Christ, to church directives and to the ordinary people of God entrusted to their care. Between 1954 and 1970, they were killed "out of hatred for the faith."

After completing his research, he submitted the documents to the Vatican. In return, he received 230 pages of questions to verify the martyrdom.

"Are they really martyrs or not? Maybe it was just politics or because of wars. Maybe they were killed by mistake. So how do you call them martyrs? The Holy See did not make it easy for us," he recalled of the Vatican questionnaires. He wrote the answers in a month. He signed the document, dated it on Jan. 31, 2015, and sent it to the Vatican. "That passed the test," he said. Pope Francis cleared the 17 martyrs for beatification in mid-2015.

The majority of the martyrs were missionary priests from France, with one from Italy. They were six Oblate missionaries; five were men from Missions étrangères de Paris. The first martyr was a Lao priest, Fr. Joseph Thao Tien, who was killed in 1954. The others were either Hmong, Kmhmu and Lao catechists or lay leaders. The last two executed were catechist Luk Sy and lay leader Maisam Pho Inpeng of Laos in 1970. 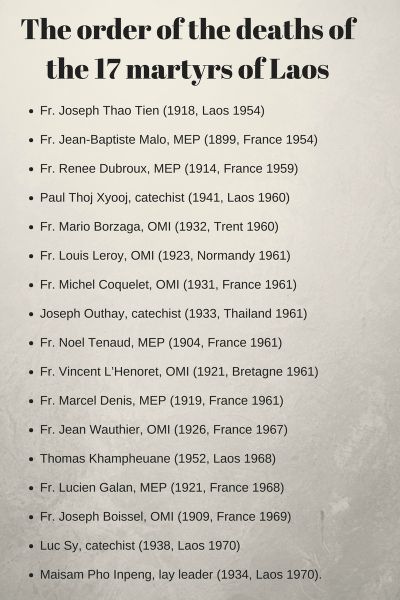 According to Vue X Yang, coordinator of the planning committee for the June event for the 17 martyrs of Laos, the thanksgiving celebration gave the Lao, Hmong and Kmhmu Catholics in the United States the opportunity to share their faith in solidarity with the martyrs. Yang said because many of the Lao martyrs have relatives overseas, mainly in the Unites States, the planning committee decided to hold this celebration here for family members.

Charity Sr. Alice Thepouthay, director of the Milwaukee-based Lao Pastoral Center and also a member of the planning committee, said it was a weekend of reliving the stories of the martyrs. It was also a time to give thanks for the witness of the faith of these men who had no fear as they put their trust in God's hand. Coming together like this is very affirming of their faith, she said. This is a wonderful sight and sound of old friends from various states visiting each other, she said, gesturing to the crowds of women in their finest tribal costumes amid a cacophony of various languages — Kmhmu, Lao, Hmong, Karen, English, French and Vietnamese.

The weekend celebration included a Mass of Thanksgiving and a banquet with presentations interspersed with Hmong, Lao, Kmhmu and Karen performances.

Laos, a landlocked country of some 7 million people, has about 45,000 Catholics living in four apostolic vicariates of Vientiane, Savannakhet, Pakse and Luang Prabang. Lao Loum, or lowland Lao, are the majority ethnic group. There are other minority ethnic groups, among them are hill tribes Hmong and Kmhmu, in northern Laos. In May 1975, the communist Pathet Lao leaders took control over the country and formed a new government.

Following the takeover, hundreds of thousands of people fled the country for fear of persecution. A majority of the refugees were settled in the United States, Australia and France.

[Peter Tran is a former editor of the Union Catholic Asian News at the Main Editorial Office in Bangkok. He was involved for some 20 years with the refugee ministry in the United States and the Vatican. He is now assistant director of the Redemptorist Renewal Center in Tucson.]

Inspired by American missioner, Hmong priest walks in his mentor's footsteps in the US