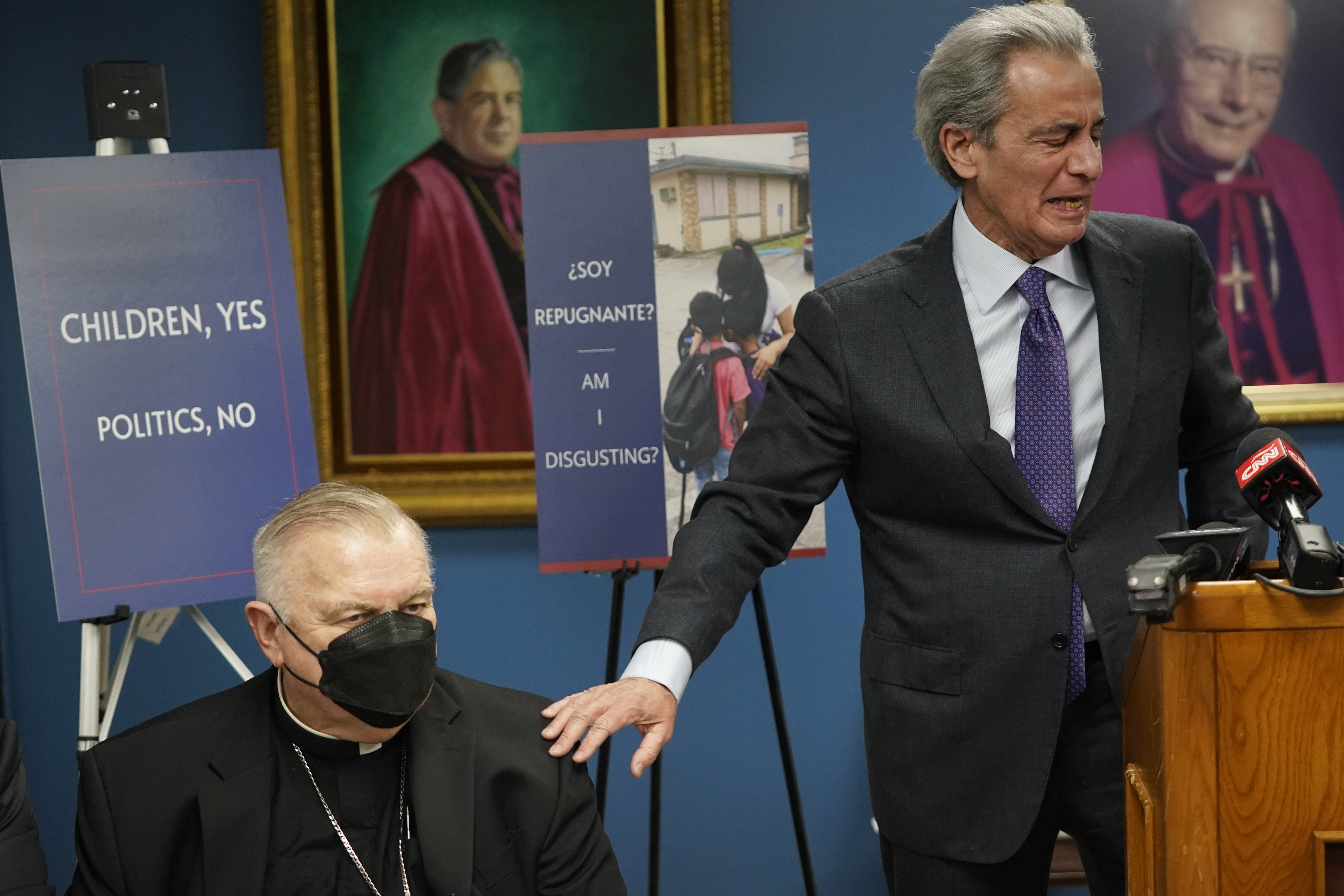 Tony Argiz, right, puts his hand on Archbishop of Miami Thomas Wenski 's shoulder as he speaks during a news conference, at the Archdiocese of Miami Pastoral Center in Miami Shores, Fla., Feb. 10, 2022, (AP Photo/Wilfredo Lee)

MIAMI — The debate over whether to deter or accommodate minors arriving at the U.S.-Mexico border without their parents has pitted Florida's Catholic governor against the state's highest-ranking Roman Catholic.

A spokesperson for Gov. Ron DeSantis tweeted about Archbishop of Miami Thomas Wenski, who misleadingly said DeSantis referred to unaccompanied migrant children who arrive at the border as "disgusting," when the governor didn't say that.

"Lying is a sin," DeSantis press secretary Christina Pushaw tweeted Tuesday, referencing an ad that included a photo of Wenski. That drew vehement reactions online from backers of Wenski and his position that, although the Biden administration's immigration policy may be "chaotic," the state should exercise "magnanimity" with those who arrive, especially children.

The head of the Archdiocese of Miami and other faith groups have implored the governor to reconsider an order that suspends renewals of state licenses for shelters that house unaccompanied children, saying these young migrants are vulnerable.

Wenski has pointed out the policy would shutter a home that's run by the Catholic Charities of the Archdiocese of Miami that originally opened to care for Cuban refugee minors. He has argued the children coming in recent years from Honduras, Guatemala and El Salvador are no different from Cuban children who arrived 60 years ago sent by parents who feared indoctrination under Fidel Castro's new communist state.

DeSantis, who wants to deter all illegal immigration, appeared last week at a roundtable with Cuban supporters and rejected the comparisons to the exodus in the early 1960s of 14,000 Cuban minors.

"To equate what's going on with the Southern border with mass trafficking of humans, illegal entry, drugs, all this other stuff with Operation Pedro Pan quite frankly is disgusting. It's wrong, it is not even close to the same thing," DeSantis said. "They were fleeing a communist dictatorship that was persecuting them. Those were not illegal immigrants."

Days later, Wenski spoke at a press conference with other business leaders and Cuban exiles criticizing Gov. DeSantis, but he misleadingly suggested the governor had referred to the migrant children themselves as disgusting.

"This is a new low in the zero-sum politics of our divisive times," Wenski said. "Children are children, and no child should be deemed disgusting especially by a public servant."

Though going against Florida's Roman Catholic archbishop might seem a risky stance for a governor who has focused on conservative, family values, former Florida Republican strategist Mac Stipanovich said the episode may play to the "Republican base."

"They've decided they will gain more from going after innocent children with brown skin than they will lose by criticizing the archbishop," said Stipanovich, who left the GOP and endorsed Joe Biden for president.

The facilities at risk of losing their licenses are part of a federally funded program for minors who typically arrive in the U.S.-Mexico border without their parents and reunite them with relatives already in the country.

Children have to seek counsel on their own but get to present their cases before an immigration judge, who decides if they qualify for legal relief. A Congressional Research Service report from last September noted that many factors lead children to migrate, including lack of employment, presence of gangs, corruption as well as tropical storms and food insecurity.

DeSantis issued the order saying it wanted no involvement in a federal program that encourages smuggling of minors without their parents.

During the George W. Bush administration, Congress transferred the care and custody of migrant children away from immigration authorities to the U.S. Department of Health and Human Services, which manages a network of shelters mostly run by nonprofits to provide less restrictive settings for children.