Miracles in the music of Carrie Newcomer 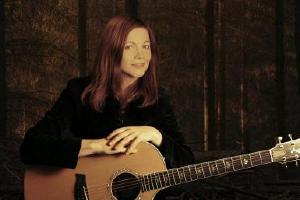 Back in the olden days, when people listened to music on CDs, I used to store my many disks in CD towers, now-defunct pieces of furniture with slots for those earth-destroying jewel cases. One whole tower was devoted to what this feminist tongue-in-cheekly calls “chick music”: Alanis Morissette, the Indigo Girls, Sheryl Crow, Sarah McLachlan, Melissa Etheridge, Liz Phair -- you know, the Lilith Fair crowd.

Last year I discovered a new fave female singer who would feel at home with Alanis, Sarah and Liz -- but with a twist: Carrie Newcomer’s thoughtful lyrics are frequently spiritual and occasionally overtly religious. Newcomer is a Quaker who has cowritten songs with spiritual writer (and fellow Quaker) Parker J. Palmer. A native Midwesterner who lives in southern Indiana, she tours around the country, gives writing workshops on vocation and art, and donates a percentage of her CDs’ profits to the American Friends Service Committee, which works for a number of peace and justice issues shared by progressive Catholics.

Best-selling novelist Barbara Kingsolver and Sojourners magazine editor Jim Wallis are longtime Newcomer fans. I am something of a latecomer to Newcomer, since she has been performing since the 1980s, initially as part of the folk group Stone Soup. Since 1991, she has recorded 11 solo albums, including “Betty’s Diner” (2004) and “The Gathering of Spirits” (2002). Her most recent release is “The Geography of Light” (Rounder, 2008). That CD is chock-full of thoughtful songs that explore the gray rather than the black and white, the spaces between dark and light referenced in the CD’s title.

My favorite song is the upbeat “Where You Been,” which includes this quirky, interreligious description: “I saw Jesus talking shop, with Buddha at the Starbucks / I saw Gaia and Ganesh, doin’ double dutch in the park / And Muhammad was throwing popcorn / to the pigeons and the sparrows / And all us crazy holy hungry ones / still believe in something better.”

In a video reflection about that song on Newcomer’s Web site, she admits this song may offend more traditionalist religious folks who believe in their one true faith. “I’ve come to believe that it’s best not to limit where and within whom I look for the sacred,” she says. “If a great prophet showed up today, where would they show up? Maybe not riding into Jerusalem on a donkey, perhaps driving into Chicago in an El Camino.”

Finding the sacred in everyday life seems to come naturally for Newcomer. For example, the brown-gray rocks that contain a sparkly quartz center inspired a song that Newcomer calls “as close as I get to a statement of faith.” In “Geodes,” she sings:

All these things that we call
familiar,
Are just miracles clothed in the
commonplace.
You’ll see it if you try in the
next stranger’s eyes,
God walks around in muddy
boots,
Sometimes rags and that’s the
truth.
You can’t always tell, but some-
times you just know.

This “Indiana bling,” as she calls geodes, teaches Newcomer to expect the unexpected, that there’s a hidden good at the center of things. “They remind me to look deeper, because often within what may appear quite ordinary is a core of beauty and mystery,” she writes in the CD’s liner notes.

If her spiritual and social justice sensibilities have a Catholic feel, it may because her mother was an Italian Catholic. (Her father’s background was Amish/Mennonite, but they attended a Methodist church.) Newcomer became a Quaker as an adult, in part because she was attracted to the social activism of the peace churches. Her Web site’s list of “activism links” includes the Sierra Club, the Parliament of the World’s Religions, and the Fellowship of Reconciliation.

She says she finds solace in Quaker silent meetings, especially in the midst of the craziness of 21st-century life. In “Throw Me a Line,” she laments: “Why do I worry so much? / It can’t add a day or a year / It usually comes down / to a matter of love or fear.” After admitting that “the world’s turning faster than it ever has been” and “the old ways I knew just don’t work anymore,” she sings:

But there is a still quiet voice
And it sounds a little like mine,
Saying, “You’re right where
you should be
It’s just going to take time.”

Newcomer doesn’t want her music to be pigeonholed as “contemporary Christian” or “New Age folksy.” She’s not preachy enough to be included with the former, and too grounded to be labeled the latter. Accompanied by piano, violin, mandolin, dobro, ukulele, cello, bass and percussion, her music has a bluesy, eclectic edge. Lilith Fair (named after the mythological first wife of Adam) has announced it’s planning to return in 2010. Newcomer would give the feminine music festival a welcome spiritual slant.

As one who lives by the Quaker motto to “let your life speak,” Newcomer believes one person can make a difference. In “One Woman and a Shovel,” she sings: “Never doubt or question the power of love, or one woman with a shovel.”

People | Miracles in the music of Carrie Newcomer

Can women rejoin the ranks?

Texas church to be demolished, like other mass killing sites before it

Trial pending for priest accused of embezzling $5 million from parish