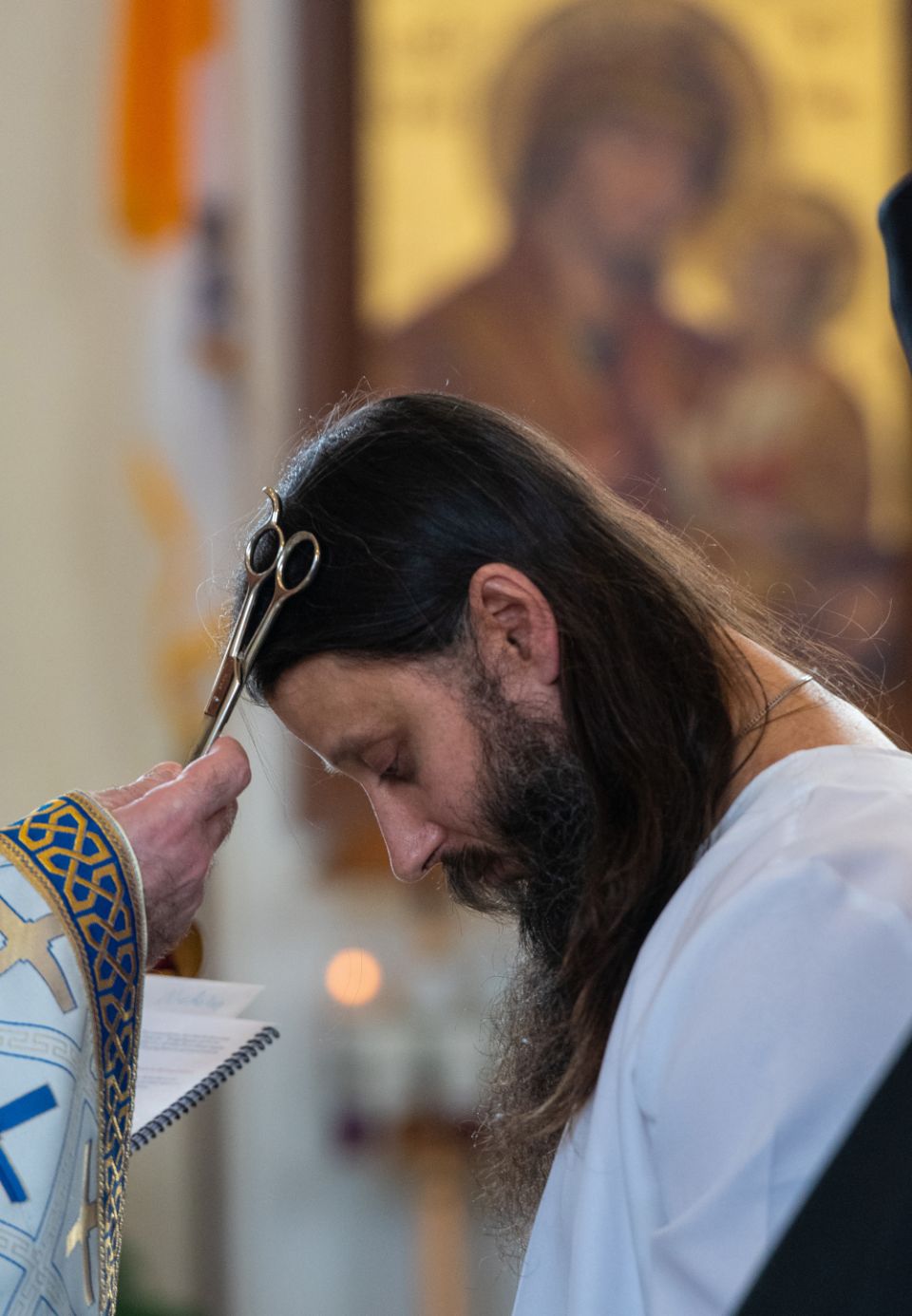 Abbot Nicholas Zachariadis, founding abbot of Holy Resurrection Monastery in St. Nazianz, Wis., holds a pair scissors to the head of Deacon Paiisi during a tonsure ceremony at St. Gregory Church in St. Nazianz, Wis., Feb. 16, 2019. During the tonsure ceremony, four locks of hair are cut from four places in the shape of a cross. Afterward the deacon is known as "Father." The tonsure in the Eastern-rite Catholic Church is equivalent to a solemn profession in the Latin-rite Catholic Church. (CNS/Sam Lucero/The Compass)

The Feb. 16 liturgy celebrated the life tonsure of Fr. Paiisi into the monastic brotherhood of Holy Resurrection Monastery.

Catholics worldwide number around 1 billion, with the vast majority belonging to the Latin-rite Catholic Church. About 20 million belong to 22 Eastern-rite Catholic churches, which trace their roots to five ritual families. The largest of these are churches of the Byzantine tradition, to which the monks at Holy Resurrection belong.

"Holy Resurrection Monastery belongs canonically to the Romanian Greek-Catholic jurisdiction and is now the largest of these Greek-Catholic monasteries," Zachariadis said. "It has always seen its mission as extending to all jurisdictions."

The tonsure ceremony was a prime example of this collaboration.

The abbot explained that in the Byzantine Catholic Church, there are "basically two vocations or charisms of the Christian life: marriage and monastic life. Even priests and deacons are either married or monks." Eastern Catholic priests are not allowed to marry after ordination.

In general, in Eastern-rite Catholic churches in their homelands, married men may become priests; they cannot marry after ordination. Under a Vatican rule in the early 20th-century, married priests could not serve the Eastern-rite churches in the United States, Canada and Australia.

But by the early 2000s, the Vatican had stopped suspending married men ordained to the priesthood for service in the Eastern Catholic churches of North America and Australia. In 2014, the Vatican lifted its ban on the ordination of married men to the priesthood in Eastern Catholic churches outside their traditional territories, including in the United States, Canada and Australia

With married Eastern-rite clergy becoming much more common, even in the United States, the witness of monastic life will be even more important than ever to emphasize the two charisms in the church," Zachariadis said. "This tonsure celebrates the witness of monastic life in the Greek-Catholic churches in the USA and the co-operation between all the Greek-Catholic churches in order to make this happen."

The tonsure – from the Latin word "tondeo," meaning to shear or shave – is rich with historical symbolism.
It consists of cutting the hair of the candidate, a gesture that is found in Scripture.

For example, Chapter 18, Verse 18, of the Acts of the Apostles, describes Paul being "at Cenchreae, where he had his hair cut because he had taken a vow."

Before the tonsure rite, Zachariadis addressed the assembly that numbered over 100 people.

"We hope that this will be the beginning of many more associations with the Ukrainian community of Chicago," he said, in his welcome to Aleksiychuk, who brought with him from Chicago a choir that led the congregation in song.

The abbot said the gathering of so many communities bodes well for their future. "This shows a very, very important direction of our monastery and, hopefully, of our Greek-Catholic churches in the USA," he said.

He also acknowledged the presence of six nuns from the Byzantine Catholic Christ the Bridegroom Monastery in Burton, Ohio, in the Eparchy of Parma.

In its 25-year history, the monastery in St. Nazianz has been unique, Zachariadis said.

Paiisi's tonsure is a positive sign for the future, added the abbot, showing that Eastern- and Latin-rite Catholics "are in this together."

"I'm very proud this morning to be kind of cementing this reality," he said, by receiving Paiisi, a deacon of the Ukrainian Catholic Church, into the monastery. He hoped it would be the beginning of many such "monastic vocations to our monastery."

"May Fr. Paiisi, as I will be tonsuring him for life, be a witness, and an important witness, to that reality," Abbot Zachariadis added.

With the tonsure of Paiisi, he said, the monastery now has 10 members. Two novice monks are scheduled for life tonsure this year.

"We are growing, but the size of a monastic community is not as important as the quality," he said. "I am very impressed by the quality of our monastic candidates."

Pope Francis, like Trump, is reluctant to condemn Russia on Syria and Ukraine

Unification or separation? Questions of church and state