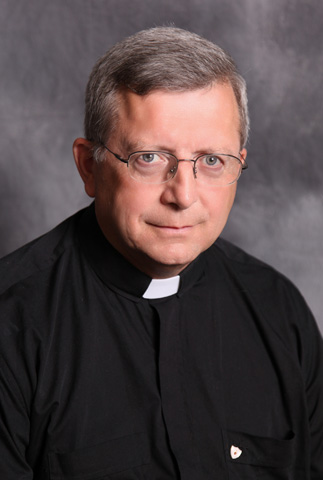 An unlikely chain of events made him not only a national celebrity but a stand-in for every priest who has ever ministered to the faithful in an emergency.

But Fr. Patrick Dowling -- who was dubbed a "mystery priest" and a "guardian angel" after praying with a woman trapped in a wrecked car in northeastern Missouri -- hopes all the hype surrounding his simple deed won't overshadow the real message.

"God loves us, he is here close to us, and when we're in trouble, he's there," Dowling said.

That, he believes, is why God gave him, a priest of the Jefferson City diocese, a chance Aug. 4 to minister to 19-year-old Katie Lentz while first responders worked to free her from her mangled car on Highway 19 near Center.

"I try to be a priest, not a hero," he stated. "And I did what a priest does. And every priest that I know, if they would pass by an accident, they would stop and do what I did."

Dowling encountered a line of stopped cars and flashing lights while traveling between Sunday Mass assignments.

He asked a local sheriff's deputy for permission to approach the car and pray with its occupant. The deputy at first said no, thinking the sight of a priest would scare Lentz. But after asking her, he told Dowling to go ahead.

"The rescue workers are people of faith and prayer," Dowling told The Catholic Missourian, the diocesan newspaper. "They were all praying. I have no doubt that the Most High heard their prayers, and I was part of his answer ... but only one part."

The priest approached the young woman, who was looking out from the mangled vehicle that had been struck head-on with such force that it was tipped up on its side.

Dowling anointed her, gave her absolution and prayed with her while she and the rescue personnel waited for stronger equipment to arrive so they could free her from the sturdily built automobile.

He then stood out of the way, praying the rosary silently for about an hour while she was being extricated from the car and moved to a medical helicopter.

"I did the priest part, but gosh, how that rescue proceeded from that time on was amazing," he said. "They're all people of faith and love. I'm convinced that the Most High himself took care of them -- you know, blessed their work."

Once he was confident that the woman would be OK, he shook the deputy's hand, walked to his car and drove away.

A few days later, KHQA-TV in Quincy, Ill., aired a segment about the incident, noting the priest seemed to come from nowhere and that his image had not been captured in any of about 70 photos taken at the scene.

The story spread from there to numerous media outlets and branched out all over social media, fueling rampant speculation about the mystery priest's possible identity.

Several people interviewed noted that Lentz's prospects for survival seemed to turn while the priest was ministering to her. Some wondered aloud if he could have been a guardian angel or even if his arrival had been miraculous.

Dowling, who does not watch TV, mentioned anointing the woman to a fellow priest, who told him, "The media is looking for you."

By then, the story had been reported all over the world.

When Lentz saw him, she reached out, shook his hand and cried.

Media learned Dowling's identity when, in clarifying some points in an article about the incident on the National Catholic Register website, he included his name in the readers' comments section.

Dozens of TV, radio, print and Internet outlets all over the country inundated Deacon Dan Joyce, diocesan communication director, with requests to interview the priest. The requests keep coming, and Dowling's telephone has been ringing about 200 times a day.

A native of Kilkenny, Ireland, he was ordained a priest of the Jefferson City diocese in 1982. He currently serves in prison ministry and in parish ministry to Spanish-speaking Catholics.

Highlights of the media attention include interviews on ABC's "Good Morning America," EWTN's "The World Over" with Raymond Arroyo, and Telemundo, a Spanish-language cable network; and in the St. Louis Post-Dispatch, USA Today, a national newspaper in Ireland, and the priest's hometown paper in Kilkenny.

He has been quick to point out that God's grace is at the heart of every priest's ministry, and that moments such are these are part of why God called each of them to the priesthood.

Having received the sacrament of anointing of the sick himself, Dowling is abundantly aware of its power to give hope and healing.

"The sacramental anointing ... it means hope," he said. "You can very easily fall into despair when you're in trouble. And it restores hope."

[Jay Nies is editor of The Catholic Missourian, newspaper of the diocese of Jefferson City, Mo. Contributing to this story was Beth Pike, a freelance producer for ABC-TV.]