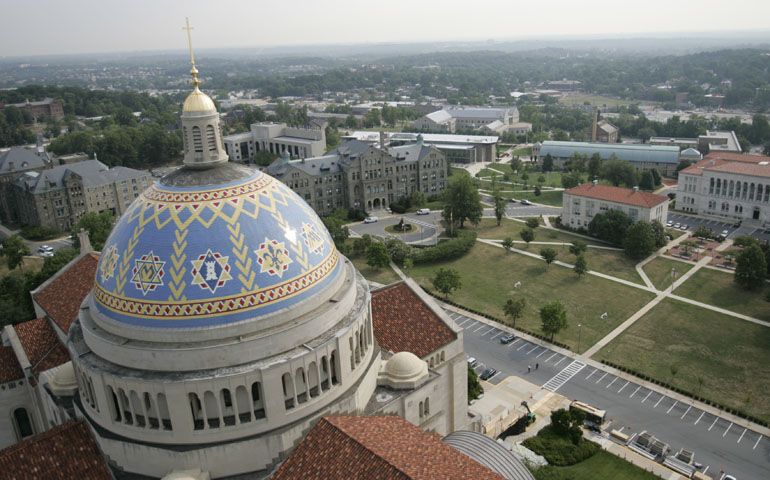 According to police, 19-year-old former student Tnuza Jamal Hassan set eight fires on campus, including one in a building that hosts a daycare center, which had 33 children in it at the time.

Although the damage was light, with most of the fires set in trashcans, Hassan told police: "You guys are lucky that I don't know how to build a bomb because I would have done that."

Hassan appears to have been motivated by her anger about Muslims being harmed in the destruction of schools in Iraq and Afghanistan, due to United States military action. She previously disturbed her roommates with a letter apparently supporting Islamic nationalism, and has been charged with first-degree arson. The Star Tribune reports that "authorities are investigating possible international ties to Hassan." A judge rejected Hassan's request for bail, citing concern for public safety.

HOUSTON — Siobhan Fleming, associate vice president for academic affairs at University of St. Thomas, is suing the university for "botching the investigation into a sexual misconduct allegation, encouraging her silence and retaliating against her after she reported receiving a nude photo from a colleague," the Houston Chronicle reported Jan. 16.

Fleming says that she received what is described in the lawsuit as an "obscene sexual photograph" with an explicit note in an email from Adam Martinez, a director of the university's faith and culture program, but was urged by then-provost Dominic Aquila not to report it.

According to the university's policy on sexual conduct and assault, "distribution of pornographic material" is recognized as being among "forms of sexual misconduct."

When she reported the photo and email anyway, Fleming claims that Aquila berated her for causing an investigation to be opened, and that she was never interviewed during the investigation. Fleming also says that the university removed her from positions on committees and attempted to isolate her by forbidding coworkers from contact with her, actions that the lawsuit says are "clearly intended to make Dr. Fleming's work environment so unbearable that she resign."

The university denies Fleming's claims and says it is surprised by the suit. "University of St. Thomas' internal investigation was conducted appropriately, and we had a third party, independent investigator," University of St. Thomas President Richard Ludwick said in a statement. "We have confidence in that process. The university's actions were appropriate in the investigation and the handling of the complaint. We did not retaliate."

LITTLE ROCK, ARK. — The Little Rock Theology Institute will be closing after this year, according to a Jan. 22 report at the Arkansas Catholic, the official newspaper of the Diocese of Little Rock.

Enrollment at the institute, which offered religious education programs for laypeople and has awarded at least 100 bachelor's degrees from 2002 to 2017, has declined significantly in recent years. The decision to close comes after the institute failed to meet the program's minimum enrollment numbers — which had been set at 25 new students — and did not offer the first-year program last fall.

The proliferation of continuing education courses is cited by the diocese as a reason for the decline in enrollment. Fr. Erik Pohlmeier, faith formation director, says his office is exploring other options in catechetical training for laypeople of the diocese.

FAIRFIELD, CONN. — Fairfield University will host "The Holy Name. Art of the Gesù: Bernini and his Age," an art exhibition showcasing work related to the Gesù, the mother church of the Society of Jesus, beginning Feb. 2.

In addition to pieces from several prestigious collections and museums, such as the Metropolitan Museum of Art, the Art Institute of Chicago and Yale and Princeton's collections, the exhibit will also feature five works from the Gesù itself, including a bust of Cardinal Robert Bellarmine, the patron saint of the university, by the great Italian sculptor Gian Lorenzo Bernini.

The exhibition is being held in celebration of the 75th anniversary of the university's founding, and will run until May 19.

"This year's workshop on the divine attributes will serve as a robust introduction to Aquinas's natural theology for the Thomistic beginner and a speculative advancement for the veteran," the event's webpage says. "Specific divine attributes will be explored as well as the broader issues of the possibility of knowledge of God in this life and divine naming."

This is the eighth year the college will host the workshop, which is sponsored by its Catholic and Dominican Institute, the Thomistic Institute at the Dominican House of Studies in Washington, D.C., and the Notre Dame Center for Ethics and Culture in South Bend, Indiana.

WASHINGTON — The Catholic University of America is getting a new dining hall.

According to a Jan. 22 announcement on Catholic's website, a $6 million donation from an anonymous couple has made the new dining hall possible.

"When we think about campus facility improvements that can dramatically improve the living and learning experience of our students, a new dining facility is right at the top of our list," Mike Allen, vice president for student affairs, said in the announcement.

The dining hall is currently planned to open in 2020.