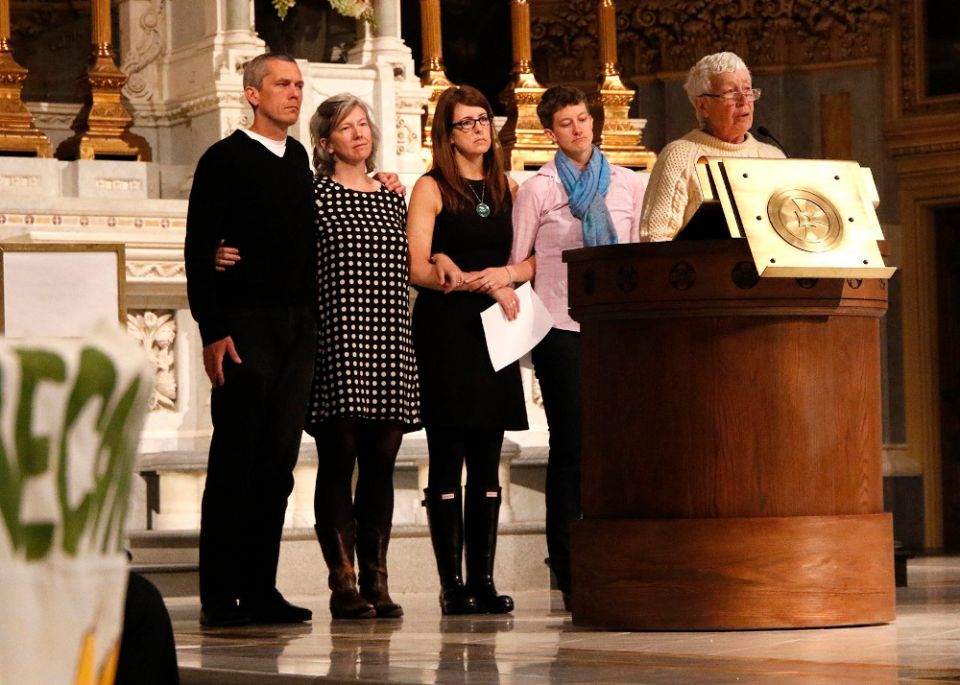 Elizabeth McAlister, right, is seen in this 2016 file photo at St. Francis Xavier in the Chelsea neighborhood of New York City. (CNS photo/Gregory A. Shemitz)

Cleveland — A group of Catholic peacemakers who acted to symbolically disarm nuclear weapons at a Georgia naval submarine base in 2018 are the first recipients of a new award for Christian nonviolent action established by DePaul University.

The Kings Bay Plowshares 7 will receive the Berrigan-McAlister Award during online ceremonies May 5, said Michael Budde, professor of Catholic studies and political science at the Vincentian school in Chicago.

"They are exemplars today of people who have made comparable sacrifices over the years to answer questions of peace and justice," Budde told Catholic News Service.

The Kings Bay group includes several members of the Catholic Worker Movement and longtime peace activists, among them Elizabeth McAlister, one of three people for whom the award is named.

The award also is named for McAlister's deceased husband, Phillip Berrigan, a former Josephite priest, and his brother, Jesuit Fr. Daniel Berrigan, who died in 2016.

Budde said the award will commemorate the 100th anniversary of Berrigan's birth May 9, 1921.

Budde said the award was established because of the Vincentian order's commitment to peace, justice and the integrity of creation and the long connection the university has had with the Berrigans.

Berrigan taught courses and led student retreats while in residence at the school in the mid-1990s and his brother led a week of seminars about that time as well. McAlister spoke at the school several times.

DePaul is one of two repositories for the brothers' personal papers. The other is Cornell University in Ithaca, New York.

In addition to the award ceremony, the celebration includes a screening online of a new film on the Berrigans, "Devout and Dangerous," May 4. Film director Susan Hagedorn and Berrigan-McAlister family members will join the event.

Registration is required at http://berriganmcalister.eventbrite.com.

Grady, Hennessey, O'Neill and Trotta are serving prison terms of various lengths in federal facilities. Colville is scheduled to be sentenced April 9. McAlister, now 81, was sentenced to time served and is living with family in Connecticut. Kelly remains in federal custody, but his whereabouts are uncertain.

All were found guilty of charges stemming from their entry into Naval Submarine Base Kings Bay in St. Marys, Georgia, the East Coast home of the Trident submarine. the night of April 4-5, 2018. There they read Scripture, prayed and spray-painted peace messages on a missile display and a building exterior before being arrested after several hours on the base.

The Navy's fleet of Trident submarines carries about half of the U.S. active strategic nuclear warheads, according to military observers. Military officials have neither confirmed nor denied the existence of nuclear weapons at the base.

The Berrigan brothers and McAlister became well known beginning in the 1960s for their protests of the Vietnam War, nuclear weapons, racism and business practices that they believed promoted injustice and poverty.

The Plowshares movement began in September 1980 when the Berrigans and six others entered a General Electric factory in King of Prussia, Pennsylvania, where they hammered on two nuclear weapons-related systems, poured their blood on documents and prayed for peace.

A lower-case god and a revolutionary vision