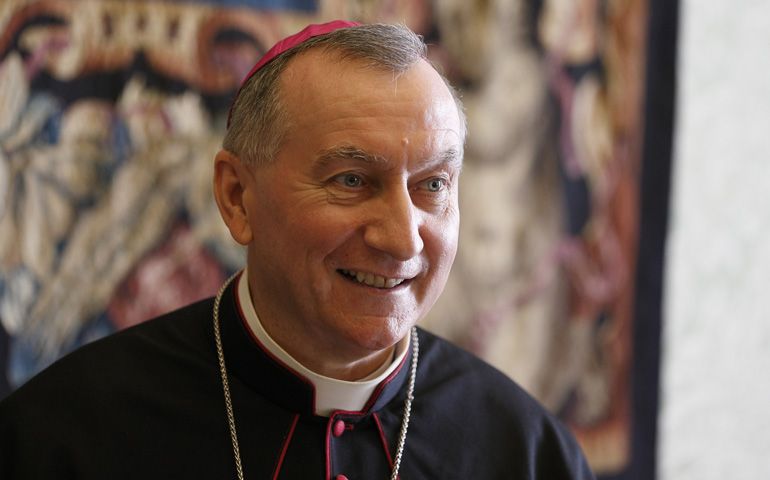 Archbishop Pietro Parolin, Vatican secretary of state, during a meeting with Perry Gladstone Christie, prime minister of the Bahamas, Nov. 18 at the Vatican. (CNS/Paul Haring)

Rome — The new archbishop serving in the post traditionally considered one of the most powerful in the Vatican said Wednesday he knows Pope Francis intends to reform his office but not what those reforms might entail.

Archbishop Pietro Parolin, who took over as the Vatican's secretary of state Oct. 15, said the pope and the group of eight cardinals advising him on church reform have made clear they are looking at reforms to his office, which has typically controlled both the diplomatic and political functions of the Vatican.

"I don't know if it's a different name or if they want to give it a new structure," Parolin told members of the press Wednesday on the sidelines of a book release event a few blocks east of St. Peter's Basilica.

"The important thing is for it to become a structure that is at the service of the pope as it has always been, but that it can be enhanced," he said.

The event Wednesday was for a new book-length version of the wide-ranging interview between Pope Francis and an Italian Jesuit priest, printed in September by 16 Jesuit publications around the world. The book, La mia porta è sempre aperta ("My door is always open"), was released in November by a publishing house that also owns one of Italy's largest newspapers.

Several members of the cardinals' group, officially called the Council of Cardinals, attended the book event Wednesday. The group, which the pope has charged with advising him on the reformation of the church's central bureaucracy, is meeting Tuesday through Thursday at the Vatican.

Jesuit Fr. Federico Lombardi, director of the Holy See Press Office, said during a briefing Wednesday morning that Parolin had met with the eight cardinals and the pope briefly Tuesday afternoon.

Among speakers at the book release were the Jesuit who interviewed the pope, Fr. Antonio Spadaro, and Honduran Cardinal Óscar Rodríguez Maradiaga, coordinator of the Council of Cardinals.

Rodríguez, archbishop of the Honduran capital of Tegucigalpa, reflected on the pope's spirituality, both from personal experience and from Spadaro's interview with the pontiff.

"To speak with the pope face to face is a spiritual experience," Rodríguez said. He said the pope has constantly a "volcanic flow of ideas" and "loves to open doors and windows and be in dialogue."

Rodríguez said for the pope, spirituality "is made of human faces," like those of Jesus, St. Francis of Assisi, the Virgin Mary, and St. Ignatius of Loyola, one of the founders of the Jesuit order.

One of the "pillars" of the pope's spirituality is discernment, Rodríguez said.

Tying such discernment to the role of the Council of Cardinals, Rodríguez said "many think that the reforms and changes can happen in little time."

However, "the pope says, we always need time, time to put the real foundations of a real change, and effective change," Rodríguez said.

While the meetings of the cardinals' group are happening behind closed doors, reform of the Vatican's Secretariat of State has come up frequently in conversations with Vatican officials and prelates in recent months.

Parolin's predecessor in the role, Cardinal Tarcisio Bertone, had come under criticism for some of the gaffes of the papacy of Pope Benedict XVI, which culminated with the arrest of Benedict's butler in 2012 for leaking sensitive Vatican documents.

Parolin, who has nearly 30 years of experience in the Vatican's diplomatic corps, previously served as the apostolic nuncio to Venezuela.

After the event Wednesday, Parolin said he was offered his role over the phone by the pope, who asked, "Do you want to help me?"

Parolin, who was expected to move to the Vatican in October but did not until November because of an unexplained health issue, said he started his new role Oct. 15 from a hospital bed.

"This is probably a clear sign of how we can always be at the service of the church even with our weakness and limitations," he said.

Asked about what specific reforms might come from the Council of Cardinals' efforts, Parolin said it was "too early to foresee anything specific."

"I really hope there will be a real reform of the spirit," he said. "The important thing is for all of us to renew ourselves in order to be in a continual conversion."

Jimmy Carter: Is it Possible to Canonize a Baptist?

Bishops agree to prepare message on 'work, poverty and a broken economy'

Spiritual insights shared after recovery from the 'coronavirus demons'