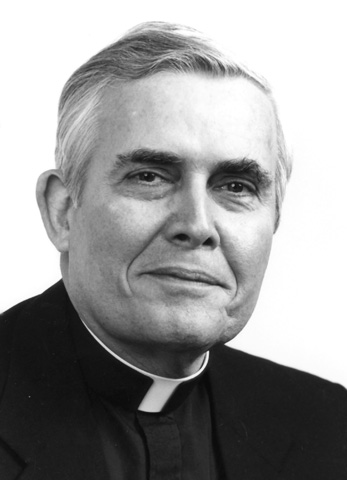 When he was appointed the fourth bishop of Raleigh in 1975, Fr. F. Joseph Gossman inherited what was then "mission territory." The Tar Heel State had only recently experienced the integration of African-Americans, and there were fewer than 40,000 Catholics in 54 eastern counties attending mostly small, rural parishes.

When he retired in 2006, Gossman left the helm of a diocese with about 90 parishes, some with the status of megachurch, after years of migration from two directions: northerners from the Steel Belt and beyond, and poverty-stricken Latin Americans from south of the border.

Gossman died Aug. 12 at age 83 after several years of infirmity related to a cerebral hemorrhage he suffered in 2010. While he was mostly a shy, quiet leader, Gossman was the perfect pick to lead North Carolina's Catholics into the post-civil-rights era. A liberal with a commitment to social justice, Gossman also played a key role in helping leery Bible Belt Southerners understand that Catholics are the same as everybody else.

Appointed by Pope Paul VI, Gossman brought a sense of egalitarianism to the diocese of Raleigh, giving self-determination to his priests and increasing leadership roles for women and laity on diocesan and parish levels. Gossman established a diocesan office of peace and justice, appointing a succession of sisters to lead the office and giving them latitude to address the important issues of the day.

Gossman's commitment to ecumenism was praised in the many tributes he received after his death. In a written tribute, the Rev. George Reed, a Baptist who heads the North Carolina Council of Churches, called Gossman "a great friend of the North Carolina Council of Churches. ... He supported our work for social justice as he believed strongly in Jesus' call to minister to the least of these and in the importance of creating systems which lifted people out of poverty and vulnerability. And he believed in doing it ecumenically, with his brothers and sisters in Christ."

Like many Southerners, Reed said he once viewed Catholics as non-Christians. "My Baptist upbringing did not lead me to perceive Catholic bishops as fellow Christians, but I had long since been disabused of that notion," Reed wrote. "Joe Gossman was a strong friend of ecumenism and of shared ministry for peace and justice. Requiem aeternam -- may God grant you eternal rest, Joe."

Another tribute came in the form of an Aug. 22 opinion piece in The (Raleigh) News & Observer, written by Religion News Service managing editor Yonat Shimron, who is Jewish. Shimron, who covered Gossman in her former role as the News & Observer religion reporter, praised Gossman as "a champion of women."

"I could find no greater fans of Gossman's leadership style than the nuns who worked with him," Shimron wrote. "They adored him."

Shimron praised Gossman for appointing about a dozen sisters as pastoral administrators for the growing number of priestless parishes that dotted the diocese as vocations waned and older priests died. (Gossman's successor, Bishop Michael Burbidge, has kept those sisters at the helms of several parishes.)

"Gossman saw no reason they shouldn't be full pastors," Shimron wrote. "In his own respectful way, he repeatedly expressed his frustration with the church teaching that women can never be priests."

Shimron quoted Gossman as saying the reasons for excluding women from the priesthood "are terribly hard for the ordinary person to understand. There are times when I'm not sure I understand it myself."

Unlike his brother bishop across the state line -- Walter Sullivan, the late prelate of the diocese of Richmond, Va., who overlapped many years with Gossman's term -- Gossman did not get as involved in peace and social justice at a national level. Instead, he kept his focus primarily in the South, and his pro-labor work and support for the poor were paramount.

Gossman spoke at the North Carolina Right To Life annual gathering, but he also was present each Good Friday to lead a prayer and walk in procession at the annual Holy Week Pilgrimage for Peace and Justice sponsored by Witness for Peace Southeast. Gossman played a major role in backing the efforts of the Farm Labor Organizing Committee, a union based in Toledo, Ohio, when it waged a successful boycott that led to a collective bargaining agreement with the Mt. Olive Pickle Co., improving the lives of the state's cucumber workers, many of whom were Latino.

Gossman also would not deny the Eucharist to Catholic politicians who advocated for abortion rights. "No one should mistake my decision not to make a public judgment about the state of the souls of those presenting themselves for Holy Communion as ignoring or excusing those who clearly contradict Catholic teaching in their public roles," he said in a 2004 homily. "I believe that as a bishop, I must renew my efforts to persuade rather than to penalize."

Msgr. Gerald Lewis, who delivered the eulogy at Gossman's funeral, told the News & Observer that Gossman, who followed the more rough-edged Bishop Vincent Waters, had "a calming influence" when he arrived in Raleigh.

"He was a gentle man who reached out to everybody, had an ear for everybody," Lewis said. "He did not begin by judging people. He began by accepting people. By embracing everybody, he allowed us to embrace each other."

Two Franciscan friars also wrote tributes to Gossman published Aug. 25 in the bulletin of Raleigh's St. Francis of Assisi parish. Franciscan Fr. Mark Reamer, the pastor, told the story of the day in 2006 when local friars had a farewell gathering and meal for Gossman.

Gossman "was preparing to retire, and we Franciscan Friars of Holy Name Province invited him to join us for Evening Prayer and dinner," Reamer wrote. "During the prayer, we presented him with the traditional brown habit of our order worn by Francis of Assisi. It was our way of recognizing him as one of us. The decision to affiliate Joe to the Order of Friars Minor was approved by our Minister General in Rome because he recognized as did we, that Bishop Gossman manifested in his life many of the virtues of St. Francis and in the words of Francis himself, 'preached the gospel always using words only when necessary.' "

" 'Good to meet you, Bishop Gossman,' I said. He replied: 'My name is Joe. That's the name my parents gave me when I was baptized. Call me Joe.' That characterized the man more than anything else. He was down to earth and very human. There was not an officious bone in his body. He was one with the people, all the people. He lived simply and there were times you could feel his discomfort with ecclesiastical trappings. Joe Gossman was collegial to a fault. His hand was on the diocesan tiller, but you knew that it was the people who were making the ship sail."

Gossman was born April 1, 1930, in Baltimore. He attended St. Charles College and St. Mary Seminary in Baltimore, graduating with a bachelor's degree in 1952. He continued studies at the North American College in Rome, obtaining his Licentiate in Sacred Theology from the Pontifical Gregorian University in Rome in 1956. He was ordained a priest of the archdiocese of Baltimore in 1955. In 1956, he began graduate studies at The Catholic University of America in Washington, D.C., earning a doctorate in canon law in 1959. He was made Honorary Prelate to Pope Paul VI with the title of monsignor in 1965. In 1968, Gossman was named auxiliary bishop of Baltimore. He was ordained a bishop in 1968 by Cardinal Lawrence Shehan.

"Please know how all of us in the diocese will work together to continue his good work and honor his memory," Burbidge said. "Thank you, Bishop Gossman, for being such a great example for all of us."