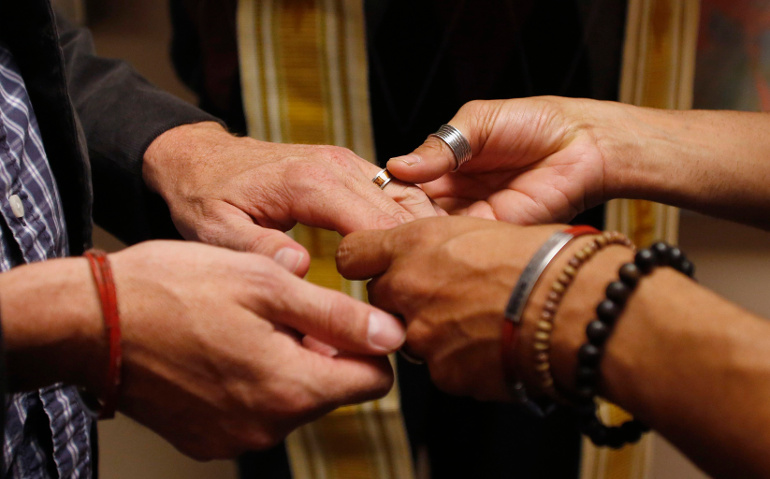 The year 2014 saw the number of U.S. states recognizing same-sex marriages nearly double over the previous year -- an expansion so profound it had some clergy wondering if they should perform any civil marriages at all.

Others wonder whether the trend, if left unabated, will put the Catholic church in an impossible position on many legal, operational and social services fronts.

So far the U.S. Supreme Court has stayed out of the fray, while the lower courts have grappled with the legality of same-sex marriage.

In 2014, federal and district court judges around the U.S. struck down one after another state ban on same-sex marriages as unconstitutional.

Forty states once had statutory and/or constitutional provisions defining marriage as only between one man and one woman. Now some 35 states and the District of Columbia allow same-sex marriage, and moreover the majority of Americans now live where same-sex marriage is legal -- largely on the West Coast and East Coast.

Not all court rulings have been in favor of the legality of same-sex marriage. In November, the 6th U.S. Circuit Court of Appeals upheld traditional marriage laws in Michigan, Ohio, Kentucky and Tennessee. (Gay couples in Michigan and Kentucky so far have taken their case to the U.S. Supreme Court.) Two federal court rulings, now on appeal, in Louisiana and Puerto Rico, upheld traditional marriage laws.

"The challenges to religious liberty with regard to the redefinition of marriage grow daily," San Francisco Archbishop Salvatore Cordileone told the U.S. bishops gathered in Baltimore for their annual fall general assembly in November.

The chairman of the Subcommittee for the Promotion and Defense of Marriage urged them not to "shy away" from reiterating the Catholic church's teaching upholding marriage as between one man and one woman.

In December, Florida had emerged as the newest legal battleground over whether it would be the 36th state to allow same-sex marriage. Floridians are waiting to see what happens there after the state's attorney general filed an emergency petition to the U.S. Supreme Court's Justice Clarence Thomas to keep the state's same-sex marriage ban in place while a separate appeals process is underway.

The legal move follows a decision from a federal appeals court which opened the possibility for gay couples to exchange vows as soon as Jan. 6, and some county clerks of court have said they may start issuing marriage licenses early next year while. At the same time, those clerks have been warned that to do so could be in violation of Florida law until the courts settle the issue.

One thing does seem certain: that public opinion, whether because of ongoing media saturation on the issue or for other reasons, seems to be shifting on the same-sex marriage issue: In 2008, Florida passed an amendment banning same-sex marriages with 63 percent of support for the ban in that state; now, six years later, the polling indicates 60 percent favor allowing same-sex marriage, with 40 percent opposed.

The last year has seen a " triumph of the political and of media boosterism for this outcome," according to Helen Alvare, professor of law at George Mason University School of Law, where she teaches family law, law and religion, and property law. Alvare also is an adviser to the U.S. Conference of Catholic Bishops, which has filed friend-of-the-court briefs in some of the state cases.

During the past 12 months, Alvare noted, "politicized judges wrote embarrassingly nonlegal and ahistorical opinions," ignoring centuries of legal precedents which had held that state marriage recognition primarily serves linking children to the adults who are charged with, and predisposed to, caring for them.

"A sort of fever took hold of politicized judges who could not seem to move fast enough to copy what the judge-next-door was doing in order to demonstrate his or her modern sensibilities," she said.

"This fever caused forgetfulness of what everybody knows is true during even a nanosecond of calm reflection: There is simply no gainsaying the uniqueness and the import of the relationship between the man and the woman."

Even while it is important for the church to reach out in love, rejecting unjust discrimination while respecting every single person with same-sex attraction, she added, there is something unique about there being two sexes, drawn to one another in a way that makes them the co-creators of human life and society.

In addition to the 35 states now recognizing same-sex marriage, in some 10 other states, judges have issued rulings in favor of the freedom to marry, with many of these rulings now stayed as they proceed to appellate courts.

But activist Evan Wolfson, a leading proponent of same-sex-marriage for three decades, was recently quoted at the Washington Ideas Forum saying that the strategy the same-sex marriage movement was never to win in every state or every court:

"The strategy was that we had to win a critical mass of support. That would give the comfort and impetus to the appellate courts or the Supreme Court to finish the job," he said.

Some expect that with so many conflicting circuit court decisions now in play, that next year the U.S. Supreme Court will finally have to take up the challenge, and observers say it could be the complex Florida situation that finally forces the issue to the highest court.

And as with the impact the U.S. Department of Health and Human Services' contraceptive mandate has had on faith-based employers, the church's social services and a variety of outreach programs -- especially those funded by government contracts -- are expected to run into legal snags when confronted with legalized same-sex marriage.

In Boston, for example, Catholic Charities stopped providing adoption services when in 2006 the state of Massachusetts said the agency had to place children with same-sex couples.

In November, the journal First Things launched a movement and online pledge inviting pastors to refuse to perform marriages as representatives of the state rather than accept any government mandate to perform same-sex marriages. Others have said such a pledge should be unnecessary to upholding true Christian marriage.

Alvare said she believes the Catholic church needs to better articulate the relationship between marriage and "the whole Catholic project" in terms of its direct link to our understanding of the identity of God, God's relationship with the human race and the meaning of life as love.

"Our Scripture and tradition makes this connection robustly, but it's hard to explain sufficiently briefly, and in language that non-Catholics can understand. We have to give it a go," she told CNS.

"Just because sex and marriage are the subject of daily tabloid headlines doesn't mean that's how real people experience them," Alvare said.