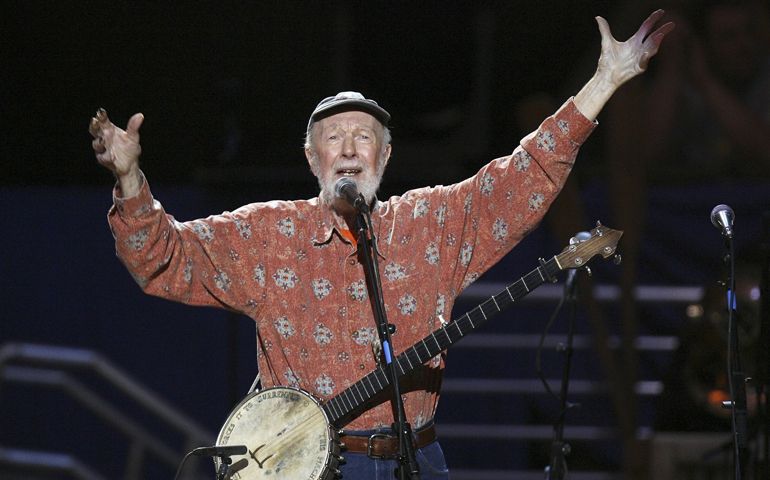 Did anyone not cherish Pete Seeger? For his ardency. His optimal resilience. His sinewy defiance of congressional bullies in the 1950s out to jail him for suspected ties to the Communist Party. His riding boxcars and freight trains in the 1930s and learning about life from hobos. His picking on a five-string banjo, strumming a 12-string guitar and singing folk songs in thousands of concerts, from packed halls to classrooms of schoolchildren. His writing and performing songs that included "Where Have All the Flowers Gone?", "Turn! Turn! Turn!", "What Did You Learn in School Today?" and "Bring Them Home." For hand-building his own house on 17 acres of land near New York's Hudson River that he bought in 1949 for $1,750. For being a loving husband for nearly 70 years. For being so unique and rare a man who never downshifted from his commitments to nonviolence, social justice, environmental ethics, human equality and dissenting from abusive governmental power.

His death at 94 in late January, a passing that earned front-page space in The New York Times and The Washington Post, was a reminder of how blessed the country was to have had his music and witness for so long.

For once, the nation's gratitude wasn't only posthumous. On a Sunday night in May 2009, when Seeger turned 90, a gathering of artists from Joan Baez and Arlo Guthrie to Bruce Springsteen to Ani DiFranco came together in New York's Madison Square Garden for a birthday celebration. Some 18,000 people assembled for an evening of music, merriment and mindfulness.

Debts were being paid. A thankful Baez recalled to reporter Amy Goodman her childhood awakening to Seeger: attending a concert and realizing that "this was music and politics in a way that I had never known. But it was so natural to me, his music and what he did with his life."

From the stage, Springsteen hailed Seeger as a "living archive of America's music and conscience, a testament of the power of song and culture to nudge history along, to push American events towards more humane and justified ends. He would have the audacity and the courage to sing in the voice of the people."

A Seeger concert was inevitably laced with stories, especially when the country was in a sour mood and needed relief. At a 1992 peace rally in Colrain, Mass., where two pacifists who had refused to pay war taxes had their home seized by U.S. marshals, Seeger encouraged the audience to have faith in the small deeds of progress. Imagine "a big seesaw, and at one end of the seesaw is a basket of rocks that's down on the ground. At the other end is a basket half full of sand. And some of us got teaspoons, and we're trying to fill up that basket and of course most people are laughing at us: 'Don't you see, the sand is leaking out of the basket as fast as you're putting it in.' 'Well,' we say, 'that's true but we're getting more people with teaspoons all the time and someday you're gonna see this basket full of sand and that whole seesaw is gonna go zooop just like that [in the other direction].' And people will say, 'Gee, how did it happen so sudden?' Us and our goddamn teaspoons."

Of the several Seeger biographies, the most soulfully written and the one most attentive to telling details uncovered after extensive interviews is The Protest Singer by Alec Wilkinson in 2009. He offers this: Seeger's "vitality sometimes seems boundless, and his nature is almost unflaggingly hopeful, but a line of melancholy runs through it. Once, after a performance in Spain that didn't go well, he wrote in a journal, 'I seem to stagger about this agonized world as a clown, dressed in happiness hoping to reach the hearts and minds of the young. When newspaper reporters ask me what effect my songs have, I try and make a brave reply but I am really not so certain.' "

President Barack Obama has done little to earn praise from the American left, but he did have an inspired moment by inviting Seeger to perform at his 2009 inauguration. Backed by a large choir of high school and college students on the steps of the Lincoln Memorial, and Springsteen at his side, Seeger led tens of thousands to join him in singing "This Land Is Your Land." It's an advocacy song, of a kind that only the nation's most enduring advocator could offer.

For everything, there is a season