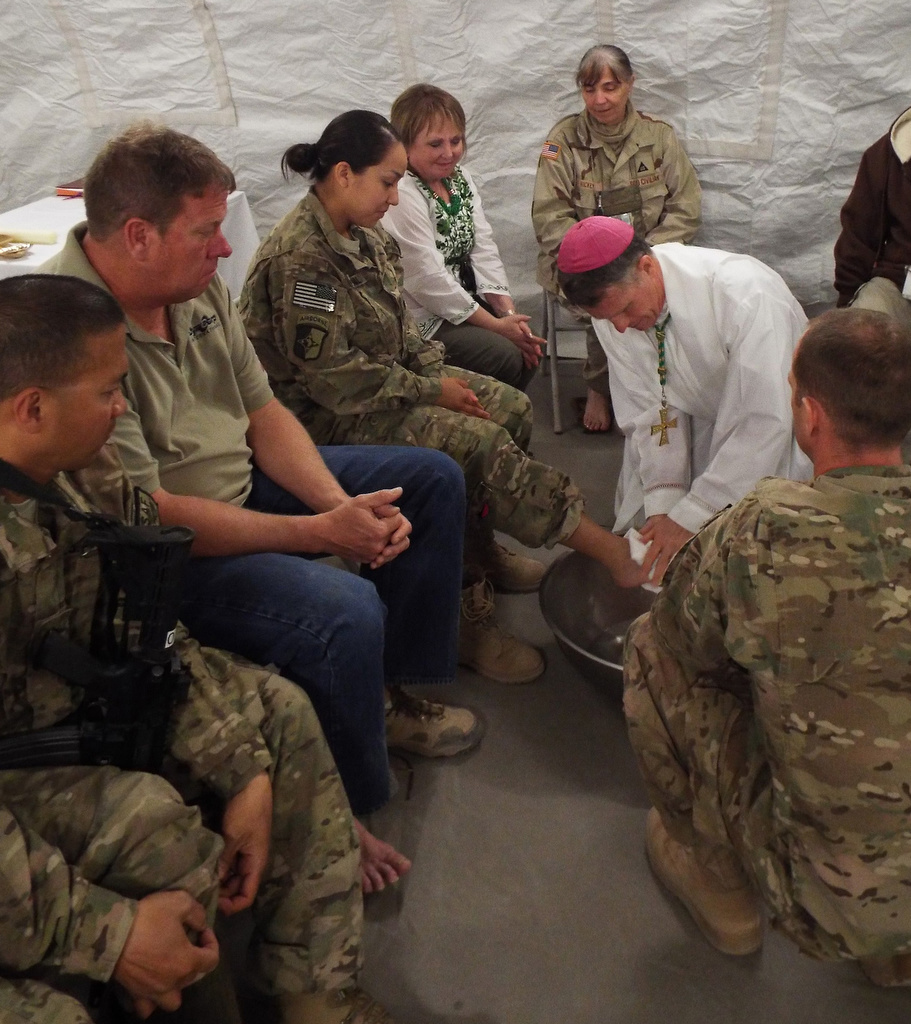 This fall, the U.S. Archdiocese for the Military Services plans to hold its first discernment gathering for Catholic priests to encourage them to consider becoming military chaplains.

The archdiocese regularly holds several retreats a year for young men who are thinking about the priesthood and the chaplaincy, but this will be the first event of its kind for ordained priests, because there is a critical shortage of military chaplains.

"The need for Catholic chaplains is enormous. We have one-fourth of the military population and we only have 8 percent of the chaplain corps," said Archbishop Timothy Broglio, who heads the military archdiocese. "So there is a tremendous scarcity of priests. This does not apply to all religious groups, however. It really only applies to Catholic priests and perhaps to a lesser extent to rabbis, but otherwise most of the Protestant groups are covered."

"For God and Country: A Call to Serve Those Who Serve" will be held Oct. 5-9 in Washington. Interested priests can apply for the all-expenses-paid gathering via the archdiocese's website, www.milarch.org. It is open to priests already incardinated in a U.S. diocese or in a religious order and currently engaged in pastoral service.

Attendees will stay in a Washington retreat house and the agenda will include visits to Joint Andrews Air Force Base, which is just outside of Washington; the U.S. Naval Academy in Annapolis, Md.; and Fort Belvoir and the Pentagon, which are both in Virginia. They will meet with military officers, enlisted personnel and other chaplains and have a chance to talk with them.

The priests also will concelebrate Mass in the Pentagon Memorial Chapel at the 9/11 crash site.

A priest must get the permission of his bishop to serve in the military. As chaplains in the armed forces, priests are under the jurisdiction of the U.S. Archdiocese for the Military Services, based in Washington.

"This upcoming discernment, it's a moment of prayer, as obviously any discernment has to be," Broglio said in an interview with Catholic News Service. "And it's also a moment of information, where we'll try to help them understand what a chaplain does."

"It's the first time, really, the archdiocese is engaging in this kind of an activity as an attempt to broaden our reach and our contact with priests throughout the United States and perhaps giving them an opportunity to explore this vocation within a vocation," he added.

In recent years, there has been a substantial decline in the number of Catholic military chaplains.

A big part of it has to do with the military's mandatory retirement age of 62, which leads to many having to step down from the role, even though there is often no one new to fill it. Since the terrorist attacks of 9/11, the number of active-duty chaplains has fallen from over 400 priests to 228. So now there is only one priest for every 1,300 Catholics in the U.S. military.

One way the archdiocese compensates for a shortage of Catholic chaplains stateside, at least, is by using "contract priests" as well as inviting personnel to go off base, if they can, to a local parish," if there is one close enough.

"Contract priests" are civilians who minister to Catholics on military bases for a defined amount of time or on a need basis.

"It's a priority to get more priests to serve as chaplains because we can still double the amount of priests in the military chaplaincy" and still have a need, according to Deacon Michael Yakir, archdiocesan chancellor.

Priests who seek to become a chaplain must meet certain qualifications, such as being physically fit and able pass a medical exam, essentially to be able to deploy with the troops if need be. And according to military rules, they must be "under a certain age," which varies depending on the branch.

Yakir told CNS he is always on the lookout for new chaplains wherever he may be.

"If I'm on vacation and I'm at a Sunday Mass somewhere and there's a priest that I thought, 'Wow, this guy's really good and I need to go talk with [him],' I'll stand on line for a half hour and wait until I get to see him an then I'll introduce myself," he said.

"For me it's kind of real" because "my son is in the Army and I'm a Vietnam vet from the Air Force," Yakir continued. "My son was deployed twice [and on] one of his deployments he was on top of a mountain just a mile off the Pakistan border and he got to see a priest no more than once every six weeks.

It's not just the personal connection to the issue for Yakir, but also about the good work they do.

"These priests really ... connect with the people and they really suffer with their people. I mean, I know one time a priest had a Mass and confessions and then the next day one of the people who was at that Mass was killed in action," he said.

"I know of another priest where somebody was injured, severely injured, and he came in to do last rites on the operating table in the war zone," he said. "And just after he [the soldier] died on the table, the nurse had taken the rosary that was in his clothes and given it to the priest and of course this was another man that he knew. And he actually went outside in his Humvee and cried."

"I'm working with the best people in the world. ... It's an honor to help them do their work," Yakir added.

Broglio said the military conflicts of recent years may have dissuaded some priests from considering being in the military as a chaplain. The archdiocese has no shortage of priests in ministry at Veterans Affairs hospitals. "They don't shoot at priests who work in the VA, as a general rule," Broglio said jokingly.

Besides providing spiritual, pastoral and sacramental care of Catholics military personnel on active duty and their families, the archdiocese cares for Catholic patients in about 170 Veterans Affairs hospitals, Catholics in the reserves and National Guard, and Catholics in government service overseas in 134 countries.

The ongoing threat of the Islamic State and the possibility the U.S. could eventually have troops on the ground to help countries fight the militants is "really a reason to respond more abundantly with Catholic priests ... so that the spiritual needs of the men and woman" who may fight this war "will be met."