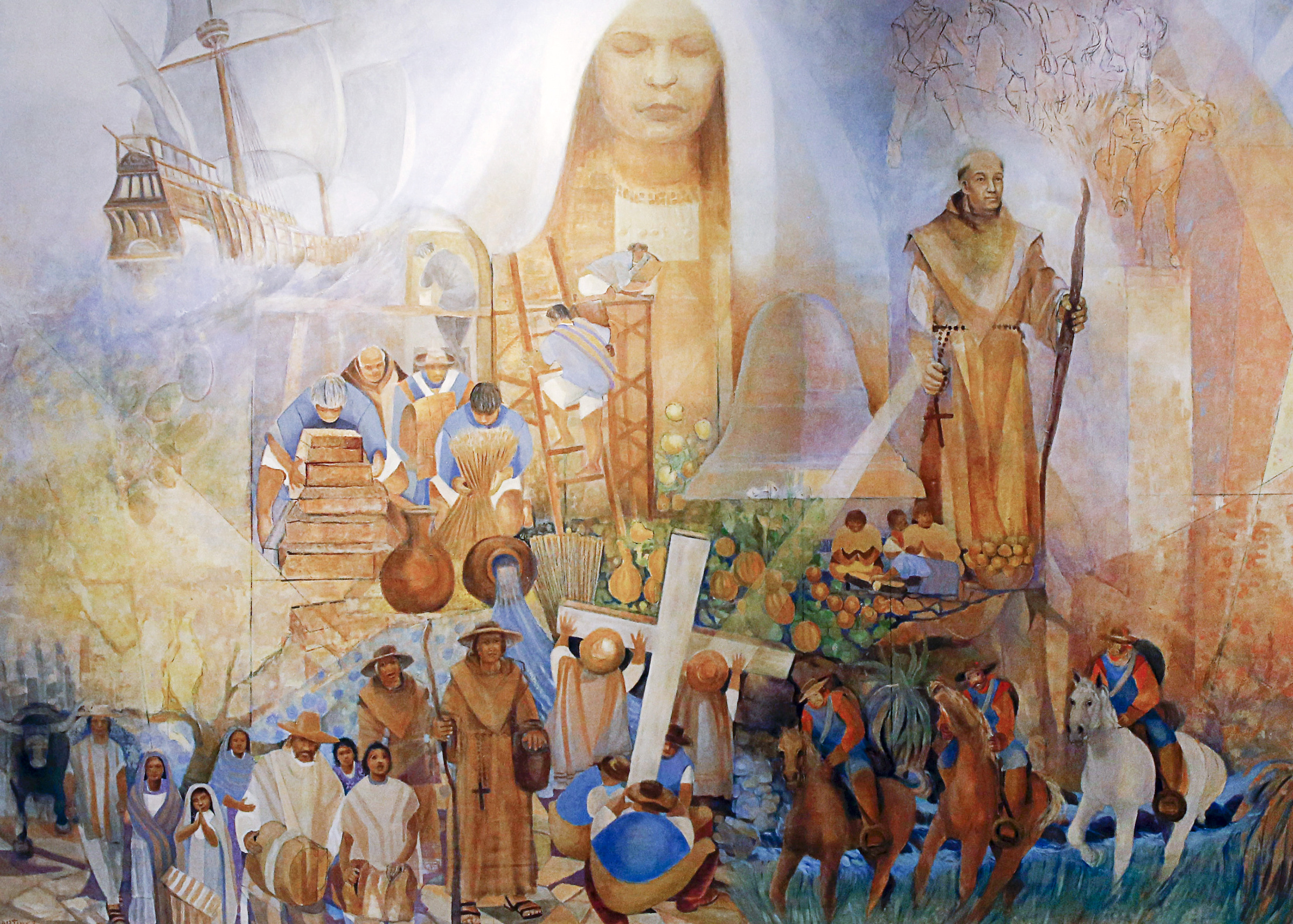 A mural by Frank A. Martinez greets people entering the Cathedral of Our Lady of the Angels in Los Angeles, Calif. The rendering depicts figures from early 18th-century California, including Blessed Junipero Serra (right) and native people building the missions and harvesting crops. (CNS/Nancy Wiechec)

The upcoming canonization of Franciscan Fr. Junípero Serra by Pope Francis on Sept. 23 in Washington, D.C., was the catalyst for a recently announced 18-month program in California dealing with cultural displays in the California missions as well as the curriculums taught in third and fourth grades in the state’s Catholic schools.

Francis’ revelation in January of his plans to canonize Serra during his U.S. visit was both surprising to the general public — Serra was beatified in 1988 — and controversial. During his trip to Bolivia in July, Francis apologized on behalf of Catholic clergy to indigenous peoples, specifically for the “crimes committed against the native peoples during the so-called conquest of America.”

Native American and historian groups have cited the creation of the California mission system — nine out of the 21 missions were founded by Serra in the 18th century -- as devastating to the cultures and lives of the tribes that were colonized and evangelized.

Andrew Galvan, curator of Mission Dolores in San Francisco, is leading the cultural study of the missions, including their museums and cemeteries. A member of the Ohlone tribe, Galvan will oversee the review of the historical and cultural content in the mission’s physical sites, their websites and visual materials, as well as updating training materials for docents and guides.

According to Los Angeles Auxiliary Bishop Edward Clark, American bishops were alerted about Serra’s upcoming canonization in the fall of 2014. They formed the Fr. Serra Committee, which has five subcommittees, including Canon Law, Communications, Devotions and Liturgy, Native American Missions and Native American education.

The Fr. Serra News Fact Sheet, compiled by Franciscan Fr. Kenneth Laverone, provincial vicar of the Franciscan Province of Santa Barbara and Vice-Postulator for the Cause, details how Franciscans and California bishops met in April about Serra’s canonization.

“As a result of this meeting,” [they] “formed a Committee of Bishops, Franciscans, Historians, Native Americans, and staff to prepare for the canonization and to begin a process of greater dialog and reconciliation with the descendants of the California Mission Indians and to address the critiques of Blessed Junípero Serra,” the document notes.

Kevin Eckery, spokesman for the California Catholic Conference, said that a survey is being conducted “not so much a response to Serra’s canonization as it is taking advantage of the canonization. It is controversial, there is no reason to pretend it is not.  It is using this opportunity to open this respectful dialogue, with the understanding that the goal is acknowledgement, not necessarily agreement.”

”There are two parts for both the missions themselves and the curriculum,” Eckery continued. “Strip out anything that is offensive, and put in what is accurate and good.”

Leading the curriculum study, Clark explained that information in social studies classes for third and fourth graders is “very romanticized, a Disneyland version of the creation of California missions.” The bishops listened to Native American families served by Catholic schools, and heard that “their history, their culture is not being respected.”  This survey is in response to that discontent, as well as to the canonization of Serra.

Clark calls Serra “the poster boy for colonization,” and said that while much of that history is undeniably tragic, laying all of it at the feet of Serra is unfair and inaccurate. He used, as an example, the story of Serra sending a priest back to Mexico, “because he was too harsh with the Indians.”  “The truth needs to be told from both sides,” he said.

Clark cites how the original Native American population of California was estimated at 650,000; by the time the roof tiles were laid on the 21st mission, there were only about 25,000, the rest “in the grave” from disease.

“Colonization had many disastrous results from the best intentions,” he said, “such as grouping people together in order to protect them from illness. They had no concept of germ theory. How could they know? No one knew. Serra was certainly not culpable.”

He also highlighted the misconception that there was one general type of “Indian” in California, when in fact, there were more than 200 tribes in that territory, with different languages, cultures and religions.  “There were 21 missions built by 21 different groups of people,” he said.

Clark said that he hopes by telling the “true story from both sides,” they can reach the “end-goal of greater understanding, and reconciliation.”

Serra’s sainthood will undoubtedly remain controversial, and continue to raise questions about where the Catholic church has been, and where it is going. The California Catholic Conference hopes that by updating the physical remains of the missions themselves, as well as modernizing what is taught about California’s history and culture in its Catholic schools, subsequent generations’ experience will at the least be more accurate, and at most, healing and inclusive for all ethnicities.

Echoing Clark, Eckery added, “It is important to make the record right in respect to the mission Indians, to make an honest effort to set things straight and move towards the future.”