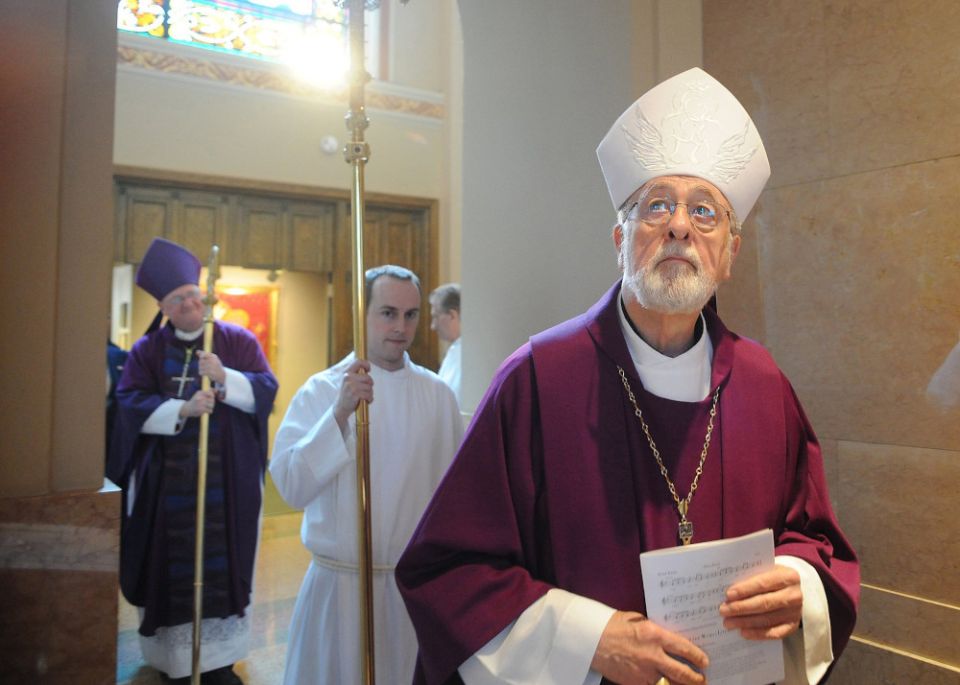 Milwaukee — Retired Archbishop Rembert Weakland, who was the ninth archbishop of Milwaukee from 1977 until his retirement in 2002, died overnight at Clement Manor in Greenfield after a long illness, the archdiocese announced Aug. 22. The prelate, who lived at the residence, was 95.

"For a quarter of a century, Archbishop Weakland led the Archdiocese of Milwaukee and his leadership embodied his Benedictine spirit," said Milwaukee Archbishop Jerome Listecki. "His pastoral letter, 'Eucharist without Walls,' evoked his love for the Eucharist and its call to service." 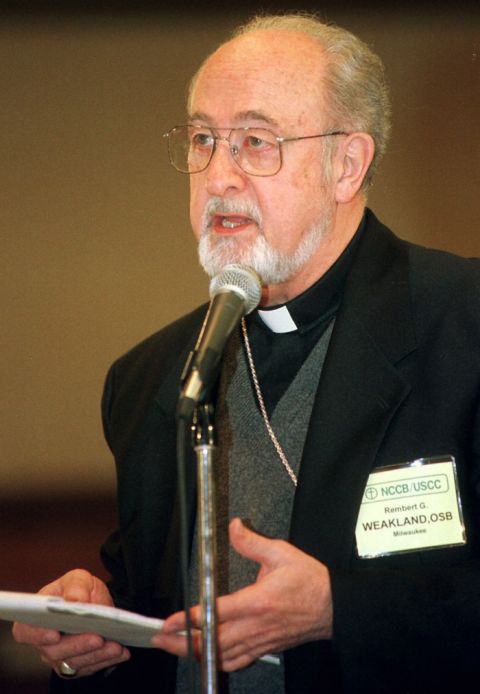 "During his time, he emphasized an openness to the implementation of the teachings of the Second Vatican Council, including the role of lay men and women in the church, the celebration of the sacred liturgy, ecumenical dialogue and addressing societal issues, especially economic justice," he added. "May he now rest in peace."

Raised in western Pennsylvania and ordained a Benedictine priest, the future archbishop rose to lead his religious order at a young age. He was 36 when he was elected archabbot for life of St. Vincent Archabbey in Latrobe, Pennsylvania. In 1967, the Benedictines, while meeting in Rome, elected him the fifth abbot primate -- head of the Benedictine order.

He spoke half a dozen languages and was an accomplished musician and music theorist.

Weakland chaired the committee that developed the U.S. Catholic bishops' 1986 pastoral letter on the economy. He ranked that document's development and the "events that surrounded it" among "the most important and formative periods of my life."

A cloud hung over Weakland in 2002 when he retired as Milwaukee's archbishop. He submitted his resignation to St. John Paul II in April when he turned 75, the age canon law requires bishops to submit their resignation to the pope.

The following month news broke of a 1998 archdiocesan settlement with a man named Paul Marcoux, who had accused the prelate of sexual abuse.

Weakland acknowledged he had had an improper relationship with Marcoux in 1979 but denied Marcoux's claim that he had been sexually assaulted. The archdiocese made a $450,000 payment to Marcoux to settle his claim.

The payment was leaked to news media and the pope accepted the archbishop's resignation the day after the story broke.

The funds came from the $1 million sale in 1997 of the headquarters of what had had been the DeRance Foundation. The building was donated to the archdiocese in 1992 when the foundation was then being dissolved. U.S. District Attorney Steven Biskupic investigated the payment and concluded there had been no illegal use of funds, because no restriction had been put on how the funds could be used.

On May 31, 2002, Weakland issued an apology to the archdiocese "for the scandal that has occurred because of my sinfulness."

With money he earned from speaking and writing, and through funds raised by several of his friends, Weakland repaid the $450,000 to the archdiocese.

In his 2009 book, A Pilgrim in a Pilgrim Church: Memoirs of a Catholic Archbishop, he detailed aspects of his life from birth to retirement, and in recounting his life's journey he described his struggle with his sexuality. He addressed the situation involving Marcoux, writing that in 1979, the man, in his early 30s, "asked me to share an evening meal. ... That evening ended in sexual touches that he later would call 'date rape.'"

Born George Weakland April 2, 1927, in Patton, Pennsylvania, he attended Our Lady of Perpetual Help School in Patton, and then enrolled at the minor seminary run by the Benedictine monks of St. Vincent Archabbey in Latrobe.

Following graduation in 1945, he entered the novitiate of the archabbey, taking the religious name of Rembert. When he completed this initiation into monastic life the following year, he went on to study at St. Vincent College and St. Vincent Seminary, also run by the archabbey.

He made his solemn profession as a monk Sept. 29, 1949, at Solesmes Abbey in France. He was then sent by the archabbot to study theology at the Pontifical Atheneum of St. Anselm in Rome.

On June 24, 1951, he was ordained to the priesthood by Bishop Simone Salvi, Abbot of Subiaco Abbey in Italy. He furthered his studies in music in Italy, France, and Germany, as well as at both the Juilliard School and Columbia University in New York City.

In his 2009 book, Weakland wrote about how as he was ascending to leadership roles in the Benedictine community, the Second Vatican Council was underway.

He recalled his enthusiasm for St. John XXIII's opening talk, writing: "Can anyone fault those of us who expected the council to usher in a new era for the church as it looked at its heritage, tried to renew and update itself, and then contribute to a better world?"

Weakland added that during the council he changed his "image of God from that of enforcing policeman to one of a loving and caring parent." 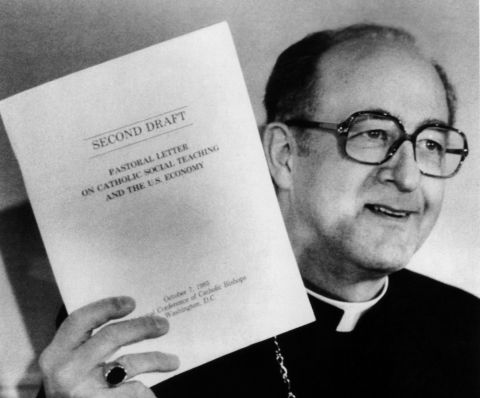 Archbishop Rembert Weakland holds up a copy of the second draft of the U.S. bishops' landmark economic pastoral in this file photo from October 1985. He headed the committee that wrote the pastoral, the final version of which was approved by the U.S. hierarchy in 1986. (CNS file photo)

In 1964, he received a papal appointment as consultor to the Commission for Implementing the Constitution on the Sacred Liturgy of the Second Vatican Council, and was appointed a member of that commission in 1968.

He served as a member of the Council of Superiors General from 1968 until 1977, the year he was appointed to head the Milwaukee Archdiocese.

St. Paul VI named Milwaukee's archbishop Sept. 20, 1977. His episcopal ordination and installation was Nov. 8, 1977, at the Cathedral of St. John the Evangelist in Milwaukee.

He participated in the world Synod of Bishops in 1969, 1971, 1973, 1987 and 1997. In 1999, Abbot Weakland received a doctorate in musicology, "with distinction," from Columbia University for his research and thesis on "The Office Antiphons of the Ambrosian Chant."

In 2000 at an archdiocesan congress organized with the theme "Called to Live Christ: Eucharist Without Walls," Weakland in a wide-ranging keynote, said the Eucharist sums up all the ways Christ has been present, is present, and will be present in and to this world.

"What it means to be eucharistic people will suddenly become clear to all of us" at the final judgment he said. "That is a lot to look forward to. ... Be aware of Christ's presence among us. It's full of mystery, wonder and awe. And the wonderful thing about it is the best is yet to come."

Tim LaHaye, evangelical leader and 'Left Behind' co-author, dead at 90

Using holograms and AI to preserve firsthand stories of the Holocaust