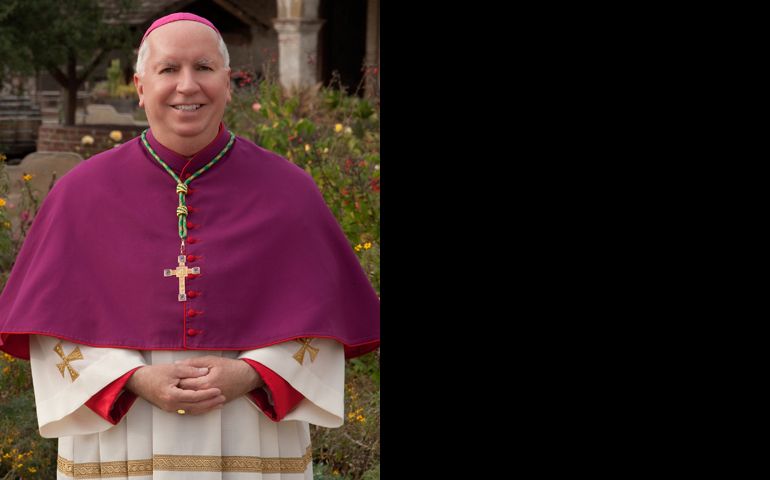 Bishop Cirilo Flores (CNS/Courtesy of the diocese of Orange, Calif.)

San Diego — Bishop Cirilo B. Flores of San Diego died Saturday of complications from prostate cancer. He was 66.

On Sept. 4, Bishop Flores had been transferred from the cancer center of the University of Southern California to Nazareth House in San Diego for hospice care.

The bishop's prostate cancer was disclosed Aug. 25 by the diocese. Flores had been ailing since mid-April, when he suffered a stroke four days before Easter.

Funeral information for Flores was incomplete as of early Monday.

Flores was one of the growing number of "late vocations" -- men who had established careers in other fields before hearing the call to priesthood. He had spent one year in a seminary after graduating from Loyola Marymount University in Los Angeles, spent a brief time teaching, then went to law school and spent 10 years as a lawyer before reconsidering a priestly vocation.

He re-entered the seminary in 1986 and was ordained to the priesthood in 1991 for the diocese of Orange. In the Orange diocese, Flores served as vicar for charities and as a member of the diocesan finance council, the bishop's Council of Priests, the Priests Personnel Board and the editorial council of the Orange County Catholic diocesan newspaper.

He was appointed auxiliary bishop of Orange in 2009, spending nearly three years in the post before being appointed coadjutor bishop of San Diego in 2012.

When Bishop Robert Brom of San Diego turned 75 last year, Flores automatically succeeded him. However, Flores spent less than one year as diocesan bishop before he died.

Flores had served on the U.S. bishops' subcommittees on Latin America and Hispanic Affairs. He also served on the board of Catholic Relief Services. For the California Conference of Catholic Bishops, he had been chairman of the Committee on Religious Liberty.

"It's a great loss to all of us, and to everyone in the diocese," said Rodrigo Valdivia, diocesan chancellor, to the San Diego Union-Tribune newspaper. He described Flores as open, gregarious, and supportive of activities around the diocese.

Flores was born in Corona in 1948, which at that time was part of the relatively new San Diego diocese that had been formed in 1936; Corona is now part of the diocese of San Bernardino, which was created in 1978. He was confirmed by Bishop Charles Buddy, the diocese's founding bishop.

He was the fifth bishop of San Diego, and its first Hispanic bishop.

At the time he succeeded Brom last year, Flores said he hoped to "continue to build on what is positive and strong in our diocese," mentioning charitable outreach, faith formation, youth and young adult ministry, priestly and religious vocations, and cultural diversity, as areas of particular emphasis.

He praised the efforts of those who work to protect children, support marriage and promote respect for dignity of all human life, assuring them that they will have his support. He told the nearly 1 million Catholics in the diocese, "We have much of which to be proud as the diocese of San Diego, and much work to do as disciples of Our Lord. Asking the intercession of Our Lady, let us pray that whatever we do will be always for the greater glory of God."