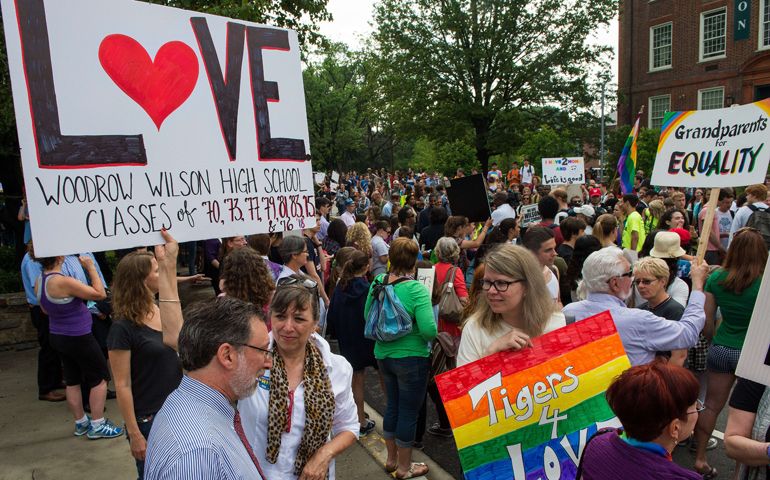 At a strapping and muscular 6 feet, 6 inches, and with ample amounts of vim of the kind he exerted as a varsity athlete at the University of Virginia in the 1980s, Pete Cahall at age 50 was tired. Not physically. Emotionally.

He is the principal of Woodrow Wilson High School in Washington, D.C. With 1,782 students, it is a rocking hub of diversity. Racial, ethnic, academic, political, cultural and political differences abound. This being the era of Columbine and Sandy Hook, visitors and students enter the building through metal detectors. On-duty police carry guns and wear bulletproof vests.

None of that was tiring Cahall. For six years, he was a model principal, outgoing to his students, welcoming to parents, ever available to the faculty and staff and wary of know-it-all education reformers. What wore him out was being "tired of living in the shadows," the dark and fearful ones of hiding his sexuality.

One morning in early June, as the school year was ending, a throng of students came together in their spacious atrium to celebrate the second annual Gay Pride Day. Cahall praised them for taking a stand for acceptance and believing that love is love, and then the principal himself, sweating and shaking, had his own stand to take: "I want to say publicly for the first time ... that I am a proud gay man. And I just happen to be the principal of Wilson High School."

Applause, instant and thunderous, greeted the disclosure. More came the next day at the year-end academic award ceremony when a five-minute ovation was a display of the students' appreciation and affection for their newly self-liberated leader. I was part of the grateful audience, being an adjunct teacher at Wilson for three decades.

That might end the story, another inching away from the toxic homophobia that sees high rates of suicide among gay and lesbian teenagers, workplace discrimination, bogus gay-to-straight conversion "therapy," and damnings of same-sex marriage by those claiming to know God's thinking on the matter.

But not so fast.

Among the damners and claimers are members of the Westboro Baptist Church of Topeka, Kan. Days after Wilson's Gay Pride Day and Cahall's coming out, about a dozen Westboro demonstrators arrived at the school. This isn't a church known for its dialoguing skills nor one that trades in nuances. It sees President Barack Obama as the antichrist, the Holocaust as God's punishment on the Jews, and Islam's Muhammad as "a demon-possessed whoremonger." That's to clear its throat. Since 1991, Westboro's bullhorning voice at over a thousand sites has been sounding mostly against gays. The Southern Poverty Law Center holds that the church is "arguably the most obnoxious and rabid hate group in America."

At Wilson, Westboro's arsenical signs included: "God Hates Fags," "Same-Sex Marriage Dooms Nations," "Why Did God Destroy Sodom?", "No Special Laws for Fags" and "You're Going to Hell." Of the Satan-bound Wilson students, a Westboro sign-holder said: "Their preachers, their leaders, their parents and teachers have lied to them their entire lives. They are entitled to a little bit of the truth and the truth is it is not okay to be gay."

Around the corner and up the street, more than 1,000 students, parents and neighborhood families gathered in the front of the high school for a counterdemonstration. Many of my students, I'm elated to say, did the organizing. Yes, I'm biased, but if asked to head a committee to award prizes to the best signs -- Westboro's or Wilson's? -- I'd give the gold to Wilson: "I Have Two Moms and Life Is Good," "God Hates Figs," "Westboro: You're Not in Kansas Anymore," "God Created Rainbows" and -- the clincher -- "Jesus Had 2 Dads."

Column | School takes a stand for acceptance and love

The dangers of sensationalizing Pope Francis on LGBTQ issues