At St. Mary, one man was custodian of all of us 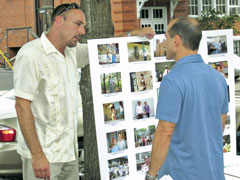 Clifton Lively tells a fellow parishioner about a visit to St. Mary's sister parish in Honduras.

WILMINGTON, N.C. -- St. Mary is a majestic, historic parish church, on its 100th anniversary designated a basilica, and for this funeral Mass on a weekday in late June, every pew was filled. Mourners stood in the aisles, at the rear, spilling over into the vestibule. A beloved pastor, a saintly nun, a community leader -- who had commanded this outpouring of respect, the largest funeral Mass at St. Mary that even the oldest parishioners among us could remember?

No, it was Clifton.

In parish life that many of us knew, Clifton Lively would have been called the janitor; custodian might have been a more dignified title. In Catholic folklore the custodian was a shadowy figure, never to be found when you needed him, a set of keys jangling at his belt, wearing dingy trousers, his breath with the sour smell of last night's beverage, or sweeter, after a needed quick nip throughout the working day.

Clifton never managed to live that stereotype. To call him a custodian would not begin to describe what he did and what he meant at St. Mary. His title was "facilities manager" and that is somewhat of what he did, manage the upkeep, renovation and new construction required so that an old church, school, gymnasium, convent and rectory continued to serve our 6,000 members.

Clifton came to us nine years ago, eager to enroll in RCIA and become a Catholic. At the time, St. Mary had been at the receiving end, for years, of the ready string of "no" and "can't" from a dismal duo who were supposed to manage the parish buildings. Fr. John Gillespie, pastor at the time, saw in Clifton a strong, healthy man in his mid-30s who might help cleaning the schoolrooms until a proper manager could be hired.

We knew little then, and know little now, about Clifton's background. He was a Cajun from Baton Rouge, surprisingly unchurched for that very Catholic area, who had lived in New York for years, years he would footnote with a roll of his eyes, signaling this was a time in his life when he had not measured up to his own apparent, but unspoken high standards.

Clifton grew into the job. His love for our Spanish Baroque gem of a church, designed by the master architect Rafael Guastavino (whose magnificent vaulting graces hundreds of historic structures including the Great Hall at Ellis Island and the Cathedral of St. John the Divine in New York), was quickly apparent. Lush floral and fabric decorations welcomed each liturgical season; Hispanic feasts came alive with cascading flowers and swirls of rich colors; weddings were sumptuous feasts for the eye.

Cranky buildings that house our school demanded daily attention. The grounds sprung up with new plantings. Each repair that he supervised or did himself had to be perfect and in keeping with the dignity of the structures. Our aging church doors could have been economically replaced with pre-assembled synthetic materials. Clifton would have none of it; they would be hand-tooled on vintage river wood.

Crowded into the pews that morning of his funeral were those who knew him, loved him, admired him. Joyce Price, the school principal; the men from the streets to whom he gave an honest day's work; Knights of Columbus, for he was one of them; the RCIA candidates he had sponsored; schoolchildren who looked forward to Lent, as it would be preceded by his raucous, bead-throwing Mardi Gras celebrations -- they all were there to say goodbye.

He was a man for whom no was a word from a language he could not grasp. Impossible jobs, the interminable moving of chairs, desks, entire classrooms, painting, plumbing repairs, leaking roofs, each and all were taken on with a sometimes fatigued shrug, but done -- almost always on time. We all had his cell number and he never failed to answer.

The eulogies by our current pastor, Fr. Robert Kus, and St. Ursula Sr. Isaac Koenig, who heads our vast social ministries outreach, were rendered in voices on the edge of cracking. And then, the Gospel reading, the Beatitudes.

I am sure I wasn't the only one checking them off. "Yes, yes, yes." Each of them, our Clifton.

His death, as his years before he came to St. Mary, were and are a mystery. He died somewhat as he had lived, quietly, not causing any fuss or bringing undue attention to himself. He phoned in, feeling ill on a Wednesday morning, and was found dead in his home late that day. He was only 43 and seemingly in excellent health. It is a mystery for which we will never know the answer. A massive heart attack? There was no autopsy.

The closing hymn could only have been "When the Saints Go Marching In," but merely singing was not enough. Fine and proper ladies of the parish, twirling parasols, danced behind the coffin, a trumpet blaring the news that indeed our Clifton was going home.

Tears cascaded over faces now ripe with smiles at this unashamed lavishing of affection.

As we left the church, Mardi Gras beads around our necks, there were so many stories people wanted to share. Clifton cleaning up after new kindergarteners who missed the target in the bathroom in their first days at school. His compassion for the campesinos at our sister parish in Honduras. The phone call from an out-of-town woman whose aged mother was in danger of being fined by the city for her unkempt lawn. She didn't know who to call, so randomly picked our Catholic parish. Clifton mowed the lawn that day, knowing neither the woman who called nor her mother.

The casket was brought out into the brilliant North Carolina sunlight and parishioners touched that shimmering surface, with a final goodbye. Goodbye to our -- come to think of it, perhaps custodian is the right title after all.

Custodian of more than these buildings, custodian of all of us parishioners, custodian of the weak as well as the powerful among us, the custodian of the richest of Catholic traditions: that of the righteous man, simple, unadorned, one who could always be counted upon to perform each task as if it were sacramental, live each encounter as if each of us were Christ. A man who would always pass that ultimate litmus test: Did you make the world a better place because you were here?

[Paul Wilkes is a parishioner and eucharistic minister at St. Mary Parish in Wilmington, N.C. He is a writer and the founder of Homes of Hope India (www.homesofhopeindia.org), which works in collaboration with the Salesian Sisters of Don Bosco to rescue, shelter and educate orphaned, abandoned and neglected girls in South India.]

People | At St. Mary, one man was custodian of all of us