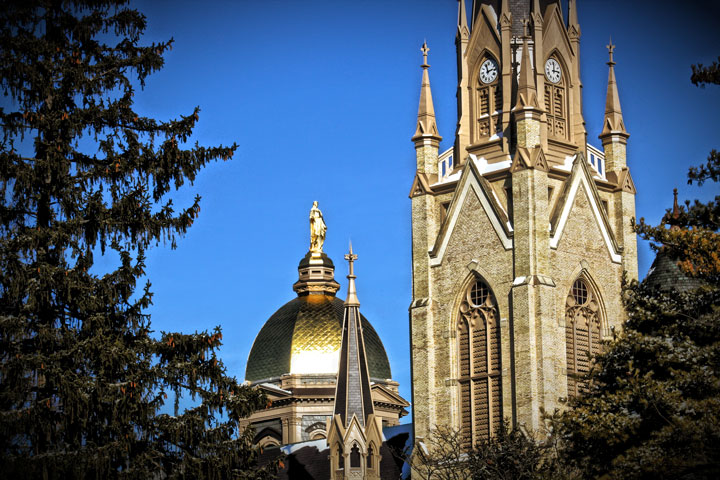 You are reading this today because I took required "core" courses, including two in theology, when I was an undergraduate student at the University of Notre Dame. It's fair to say that I would not be a columnist for the National Catholic Reporter if it hadn't been for those general education requirements.

So it's not surprising that I was a little taken aback to hear that the university is considering dropping or changing them. This past spring semester, a committee charged with reviewing Notre Dame's core curriculum and general education requirements spoke publicly about one option that might replace the required theology and/or philosophy courses with ones from other departments that cover the Catholic intellectual tradition -- say, a literature course on Dante.

Of course, philosophy and theology faculty are not too keen about that prospect, since such a change might negatively affect their enrollment numbers. And those who argue for the importance of a Catholic university's religious identity are also up in arms -- such as authors in First Things and the National Catholic Register, and the National Catholic Reporter's own Michael Sean Winters.

These are not folks with whom I regularly agree, but this time we're on the same side. I don't necessarily think required theology courses are the only way -- or perhaps even the best way -- to maintain and promote a university's Catholic identity. (For example, responding forcefully and truthfully about sexual abuse on the campus would be a start. But I digress.)

But general education courses across the curriculum -- including in departments that many 18-year-olds will not choose of their own volition, such as theology and philosophy -- is essential for educating well-rounded, informed citizens of a democracy and members of our church.

I probably would not have taken theology courses had I not been "nudged" by the requirement. And while I hated my first required theology course -- a dry survey of the Old Testament during which I constantly had to refer to a "cheater" timeline to keep everything straight -- my second theology course was with Holy Cross Fr. John S. Dunne, an award-winning teacher and author. I was captivated by his lectures in the old business building. I remember his energy (he was in constant motion) and how I poured out my life story and struggles in a required journal, on which he scrawled some very encouraging words.

I also remember thinking, "Wow, if I'd known theology was this interesting, I might have majored -- or at least minored -- in it." (That would be rectified about 15 years later with graduate studies in theology.)

By the luck of the draw, my core sophomore seminar at Notre Dame also turned out to be on the history of American religion, which fascinated me and helped me decide to major in American studies -- one of those majors that prompts relatives to ask, "What are you going to do with that?"

Become a journalist, it turned out, and one specializing in religion. Shortly after graduation, I was working at a daily newspaper in California when the city editor looked at me and said, "Hey, Schlumpf, you go to church. Can you cover this religion story?" And thus my religion journalism career was born.

More recently, I also have had the honor of being a part of another university, where I teach in the Communication Department. My students, many of them first-generation college students, are less interested in a liberal arts education than in one that can help them climb the economic ladder. I can appreciate that, but I also like that the university forces them into some courses where they have to think about life's big questions, like "Who are we?", "Why are we here?" and "What is our responsibility to the rest of the world?"

While our university is no longer religiously affiliated, Notre Dame obviously is. So my alma mater has, at least until now, had its students ask those big questions in light of the Christian and Catholic traditions.

Most everyone agrees, in theory, that the university should continue to do that. But how to get there? There is so much to squeeze in, especially since faculty can't count on high school having covered some of the basics anymore. A college-educated person should have basic writing, speaking and critical thinking skills, but majors also have a lot of subject matter to cover. A degree in architecture at Notre Dame, for example, already requires a fifth year.

While faculty and university administration worry about learning outcomes, today's students -- and their nervous parents -- are understandably concerned about the more practical outcomes of a college degree. In short, will it get a graduate a high-paying job ("high-paying" defined as "enough to pay off enormous student loans")?

Government oversight of higher education is primarily focused on these practical outcomes too. The so-called "Obama scorecard" will rank colleges and universities based on cost, graduation rate, employment, median borrowing and loan default rate. Important information, to be sure, but definitely an incomplete picture.

Despite this trend, the public response to the possibility of the loss of the theology requirement at Notre Dame has been overwhelmingly negative, with everyone from Catholic Relief Services director Carolyn Woo (a former dean of Notre Dame's business school), letter writers to the student newspaper, and, of course, that self-appointed guardian of Catholic identity, the Cardinal Newman Society, pleading to keep it. Opponents even came up with a creative hashtag: #loveTHEOnotredame (a play on the last line of the alma mater song).

As for me, I'm convinced of the importance of the liberal arts and of general education courses -- including theology or religion -- for students of every major. Don't blame me: I learned it from you, Notre Dame.

A version of this story appeared in the August 14-27, 2015 print issue under the headline: In support of general education that includes theology.