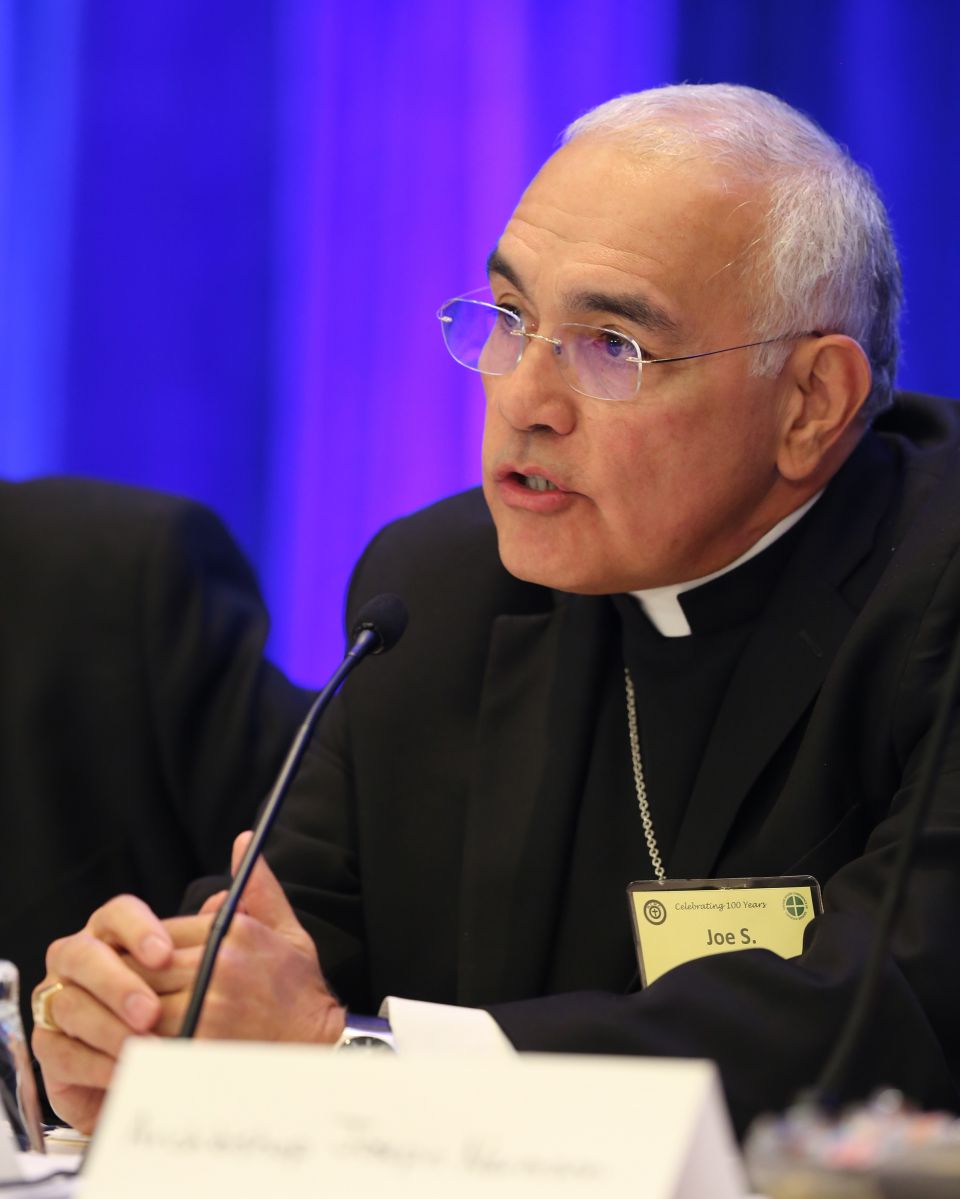 Bishop Joe Vasquez of Austin, Texas, speaks during the fall 2017 general assembly of the U.S. Conference of Catholic Bishops in Baltimore. (CNS/Bob Roller)

Austin, Texas — As police investigated a series of package explosions in central Texas that killed two people and injured four others, two of the state's bishops said their thoughts and prayers were with the victims and families and friends of those victimized by the explosions.

"These appalling attacks have killed and injured innocent people, young adults, and children who were in their homes, bicycling on the street, and working at their jobs," Archbishop Gustavo Garcia-Siller of San Antonio and Bishop Joe Vasquez of Austin said in a March 20 statement.

The manhunt for the suspected bomber ended early March 21 when he detonated a bomb in a vehicle as police closed in, authorities said.

Police sources identified the suspect as Mark A. Conditt, 23, of Pflugerville, an Austin suburb, the American-Statesman and KVUE-TV reported.

Law enforcement officials released no information on what led them to the suspect.

National experts had descended upon on Austin, joining local law enforcement in a race to solve a mystery that rocked the Texas capital since the bombings began March 2.

The first three devices were hidden in packages that had not been mailed but placed on unsuspecting people's doorsteps. The initial explosion killed 39-year-old construction worker Anthony Stephan House, who brought the package into his north Austin home.

Ten days later, March 12, a second explosion killed 17-year-old high school student Draylen Mason and injured his mother. Hours later that same day, a third explosion seriously injured a 75-year-old woman. Both explosions, which happened in East Austin during the South by Southwest festival that draws more than 500,000 to the city's center, forced the cancellation of some events. Officials said the explosions did not appear to be connected to the event.

Almost a week later, March 18, a fourth package -- unlike the previous three -- was a tripwire device that exploded, seriously injuring two other men in a leafy neighborhood in Southwest Austin. Afterward, state and local officials offered a $115,000 reward, pleading for information that would lead to the arrest of anyone connected to the bombings.

Then March 20, a fifth explosion occurred at a FedEx facility northeast of San Antonio, originating in a package bound for Austin. Local officials believe the incident, which injured one employee, was related to the Austin-area bombings, according to reports.

The person who shipped the March 20 package that exploded also shipped a second parcel that was recovered and turned over to authorities. Another explosion took place at a Goodwill store the evening of March 20 and injured one person, but law enforcement determined it was not related to the other incidents.

"The randomness of these attacks and their increasing frequency are perhaps meant by their perpetrator to spread fear and cause division in our communities," the bishops said. "However, as we have seen time and time again, tragedies such as these strengthen our bonds and bring our communities together in prayer and recognition of the sanctity and preciousness of life."

The bishops continued: "We know that law enforcement agencies are diligently striving to solve these cases and bring those responsible to justice. We place our trust in the Lord, as it states in Joshua, 'Be strong and courageous. Do not be afraid; do not be discouraged, for the Lord your God will be with you wherever you go.'"

Philippine priest, kidnapped in May, freed

New memoir asks: What does it mean to be Black, to be a Black woman?