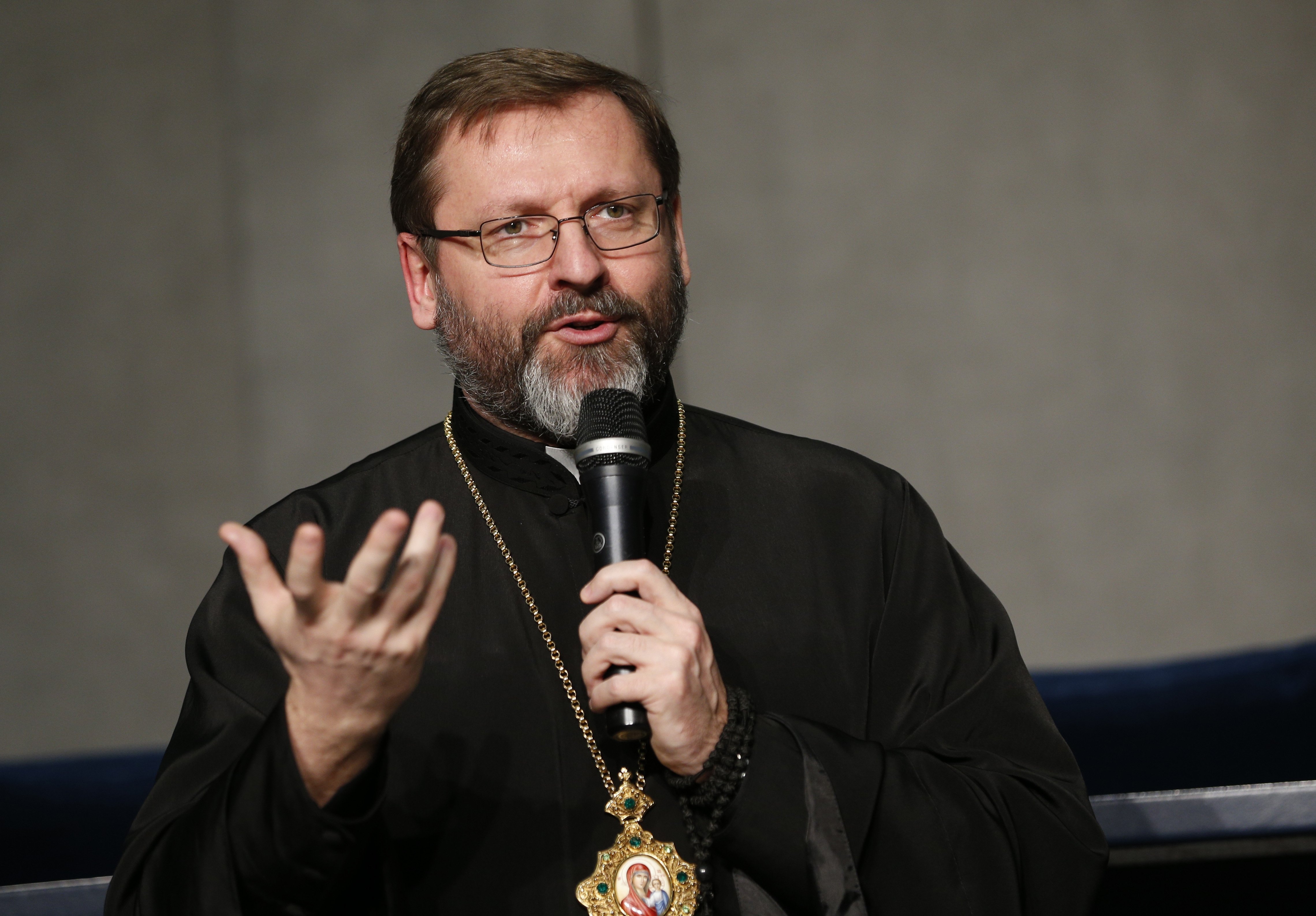 Archbishop Sviatoslav Shevchuk of Kyiv-Halych speaks to reporters at the Vatican in this Jan. 26, 2018, file photo. (CNS photo/Paul Haring)

KYIV, Ukraine — As Russia fired missiles on several Ukrainian cities and Russian troops reportedly landed in Odessa, the head of the Ukrainian Catholic Church affirmed the right of Ukrainians to defend their homeland and assured his people that God would watch over them.

"At this historic moment, the voice of our conscience calls us all as one to stand up for a free, united and independent Ukrainian state," said Archbishop Sviatoslav Shevchuk of Kyiv-Halych, head of the Ukrainian Catholic Church, in a statement to his people Feb. 24.

The archbishop was supposed to be in Florence, Italy, for a meeting with other bishops from Europe and around the Mediterranean, which Pope Francis was scheduled to address Feb. 27. Instead, Archbishop Shevchuk stayed in Kyiv with his people.

In a letter to the bishops in Florence, the archbishop said Ukraine was defending European values "at the cost of the blood of its children" and the whole country risked becoming "a death camp" because of Russian aggression. He pleaded with the bishops to pressure their governments to "help us defend peace in Ukraine and in Europe."

Early Feb. 24, Russian President Vladimir Putin launched a wide-ranging attack on cities across Ukraine, after months of troop buildups near the Ukraine border. Russia said it only targeted military installations. A Kremlin spokesman said the attacks were "a special operation" and called it the "demilitarization and denazification" of Ukraine.

"President Putin has chosen a premeditated war that will being a catastrophic loss of life and human suffering. Russia alone is responsible for the death and destruction this attack will bring, and the United States and it allies and partners will respond in a decisive way. The world will hold Russia accountable," Biden said in a statement.

Ukrainians began fleeing cities, with lines forming at border crossings from Ukraine to Poland. Earlier, the president of the Polish bishops' conference asked Polish Catholics to be prepared to welcome Ukrainian refugees.

But in his message to Ukrainians, Archbishop Shevchuk told them, "Today we solemnly proclaim: 'Our soul and body we offer for our freedom!'"

He described Russia as "the treacherous enemy" and "an unjust aggressor" who attacked Ukraine, bringing "death and destruction."

The history of the last century teaches us that all those who started world wars lost them, and the idolaters of war brought only destruction and decline to their own states and peoples.

"We believe that in this historic moment the Lord is with us," the archbishop said. "He, who holds in his hands the fate of the whole world and of each person in particular, is always on the side of the victims of unjust aggression, the suffering and the enslaved."

God "captures and overthrows the mighty of this world with their pride, the conquerors with the illusion of their omnipotence, the proud and insolent with their self-confidence," he continued. "It is he who grants victory over evil and death."

"The victory of Ukraine will be the victory of God's power over the meanness and arrogance of man! So it was, is and will be!" the archbishop insisted.