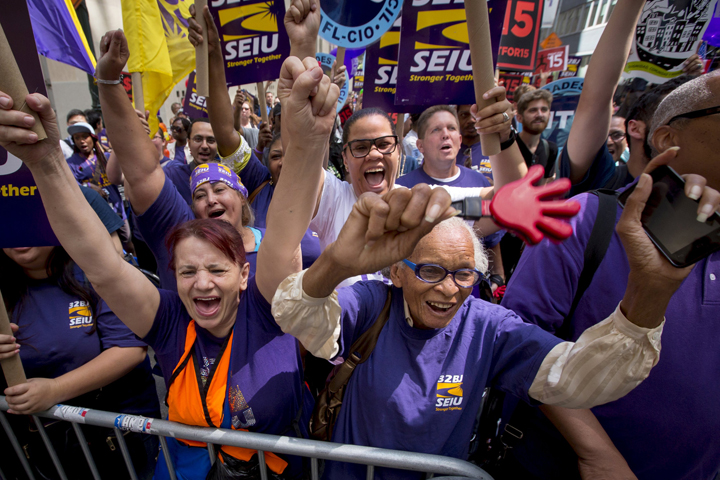 People at a July 22 rally in New York City celebrate passage of a recommendation by the New York State Fast Food Wage Board that the minimum wage for fast-food workers be raised to $15 an hour. It would be raised in increments to $15 by 2018 in the city and by 2021 statewide. (CNS photo/Brendan McDermid, Reuters)

The “Fight for $15” — the fight to turn the minimum wage into a living wage — has won a few impressive rounds, but the bigger battle against economic inequality still faces a lot more rounds against stiff odds.

These increases come on the heels of similar hikes in the cities of Los Angeles, Seattle and San Francisco. They fit into a movement known as “the fight for $15,” which has drawn strong support from faith communities across the country.

In late July, Sen. Bernie Sanders, I-Vermont, who is a presidential candidate, introduced the Pay Workers a Living Wage Act, which proposes to gradually increase the current federal minimum wage of $7.25 over the next five years until it reaches $15 per hour in 2020. A similar bill also is under consideration by a House committee.

Higher wages for the working class is “serious and imperative,” said Harvey Kaye, the Ben & Joyce Rosenberg Professor of Democracy and Justice Studies at the University of Wisconsin Green Bay. “But I wish the fight could raise the question not only of a minimum wage, but a living wage.”

Another Republican presidential candidate, former Arkansas governor Mike Huckabee, declared in a video response to a question about helping the hungry and poor: “Instead of fighting over the minimum wage, I'm going to focus on solutions to help every American earn his or her maximum wage."

Beyond the minimum wage, the working poor and poor in many states remain disenfranchised by restrictive voter ID laws. CEO pay stays sky-high while average worker pay stagnate. Millions of Americans are working overtime and not getting paid for it, with ameliorative efforts fraught with uncertainty. So-called Right to Work laws are proliferating and weakening unions. The Black Lives Matter movement is busy showing America just how compromised it remains on racial justice and police brutality. Poverty rises in suburbs while America’s most powerful cities gentrify.

*Last year, a Princeton study, drawing on an examination of 1,779 policy initiatives from 1981 to 2002, said that America is no longer in fact a democracy, but an “oligarchy.”

"The central point that emerges from our research is that economic elites and organized groups representing business interests have substantial independent impacts on U.S. government policy," the paper’s authors wrote, "while mass-based interest groups and average citizens have little or no independent influence."

Kaye believes the Fight for $15 has not yet led to broader coalition building or other advances.

Nevertheless, Rabbi Michael Feinberg, executive director of the Greater New York Labor-Religion Coalition, which helped secure the increase for fast food workers in New York State, said it was, “hopeful to many that this was a worker-led and worker-sustained effort in an industry that told them from the beginning, basically, don’t even bother.”

“They won a really extraordinary increase in wages that will have a real effect on their lives and their communities,” he said.

“Now, nobody, especially in New York, is saying that what they’ve won is entirely sufficient,” he added. “It’s not a living wage for New York City … but it shows that these kinds of campaigns can fight and win.”

“Public institutions have the responsibility to show the way, to model for the private sector what needs to be done,” she said. “I do think it will be a precedent for other public institutions in states that do not have hostile governors and hostile overseers.”

Boris put the wage increases into historical — and human — perspective.

“Well, even in that heyday, the United States was not united in its political economy,” or interplay between economics, law and politics.

“We’ve always had different political economies — agricultural, low-wage economies, various urban economies, the world of clerical office workers, women’s labor — that often were not included,” in the movement that emerged out of the Great Depression, she said.

But Boris remains “optimistic in so far as people are on the move.”

Kaye thinks that “we need some kind of leadership, some kind of progressive movement to draw [disparate social justice efforts] together.” He thinks that, “it’s for the already organized to take the initiative in grabbing hold of these movements.”

“Imagine,” he said, “if labor had embraced the Occupy question [about inequality] in a significant fashion, and if the Democratic Party, instead of paying lip service, had really addressed it.”

Feinberg, the New York State labor-religion organizer, said that “beyond asking for bump-ups in what is the minimum wage, we need to go beyond to a living wage for all people. And that’s actually the campaign that we’re going to embark on next,” he said.

*This story has been updated to remove a misattributed quote.