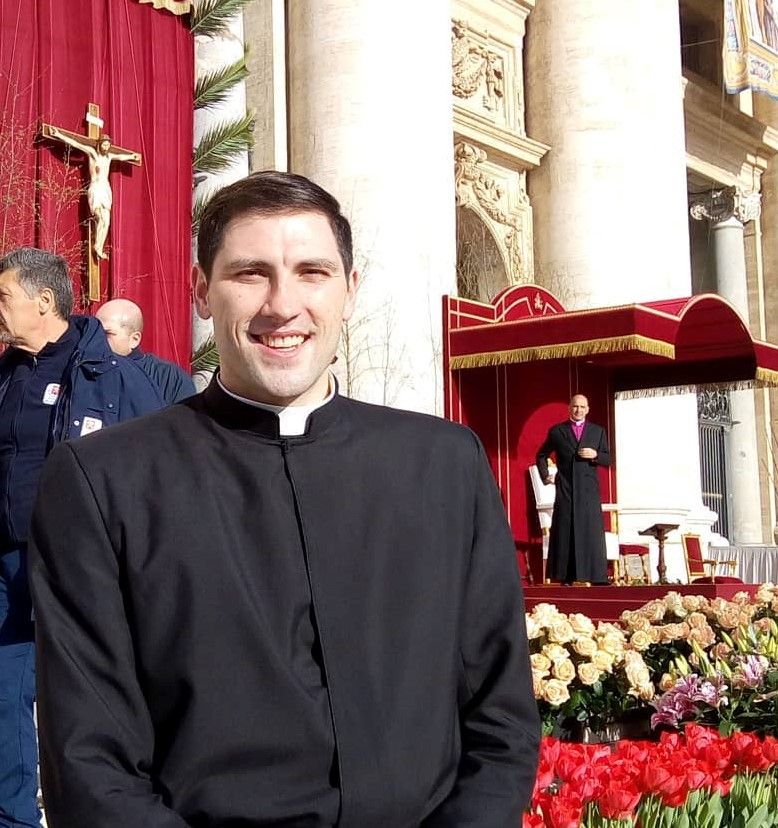 Legionaries of Christ Brother Anthony Freeman, 29, is pictured before serving Pope Francis' Easter Mass at the Vatican April 1. The U.S. seminarian from Houston was found dead in his room in Rome April 2. Italian authorities are investigating the death. (CNS /courtesy Legionaries of Christ)

Rome — Friends and fans called him a "gentle giant," a faithful "prayer warrior" and a Clark Kent whose superman power was helping people grow in holiness and faith.

"I believe I truly knew a saint," one friend wrote.

The written comments were among the hundreds of condolence messages, prayers and stories submitted to an "in memoriam" page on the RegnumChristi.org website for Legionary of Christ Br. Anthony Freeman of Houston.

The U.S. seminarian, who was a third-year theology student at Rome's Pontifical Regina Apostolorum University, died unexpectedly at the age of 29. He was scheduled to be ordained a deacon July 7 in Houston.

He was found dead in his room April 2 after classmates realized he had not joined them for a scheduled outing. The university called Italian authorities, who were still conducting an investigation and autopsy as of April 4 to determine the cause of death.

He'd had supper with the seminary community April 1 after serving as an acolyte that day at the Pope Francis' Easter morning Mass, carrying the cross in the opening procession.

"They usually pick the tallest person" to carry the cross to give it prominence, and "he was tall and strong and to bear the cross was very symbolic" in hindsight, Legionary Father Aaron Smith told Catholic News Service April 4.

Born in Houma, Louisiana, in 1988 to Brian and Debbie Freeman, Freeman studied at Legionary institutes in Center Harbor, New Hampshire; Colfax, California; Cheshire, Connecticut; and Thornwood, New York. He started studying in Rome in 2013 and received the ministry of acolyte in 2017.

This "millennial" seminarian used social media and email to connect with and inspire countless people to seek holiness and happiness in Christ. On Facebook, he called himself a "difference maker, Vatican spiritual guide, helping leaders become apostles."

He managed a "Catholic Life Coach" page on Facebook and had more than 11,000 followers on his Instagram account, @catholic_life_coach. He posted inspirational memes like "Maybe you won't be a saint by the end of the day, but you can be one step closer" and brief YouTube videos offering further thoughts and reflections about his posts and vocation.

The idea, he said on his website -- branthonyfreeman.com -- is that too much "motivational material that exists is about getting fit, rich or laid. That's not good enough. We NEED motivation and encouragement for living out our faith."

After a fellow brother showed him a book of business slogans and after a fan had asked him to offer deeper explanations of his inspirational phrases on his accounts, he was inspired to write a book. The result was "One Step Closer: 40 Doses of Motivation, Hacks and Experiences to Share with Millennial Catholics," published in January 2018.

His online outreach, extensive travel, ministry offering tours of the Vatican and his outgoing personality meant, according to numerous commenters on the Regnum Christi memorial page, that he had a huge impact on people, all over the world.

"He truly impacted my life. His love for life and the Lord inspired me and pushed me deeper into my relationship with God. His spirit was gentle and yet on fire and contagious," said one commenter.

Another wrote, "You were a marvel on social media! I felt like I knew you even though we never met. You always responded to my messages right away and were a beacon of light for all those you touched. You were Christ for others on this planet!"

'The Holy Game' is a deep dive into seminarians and soccer