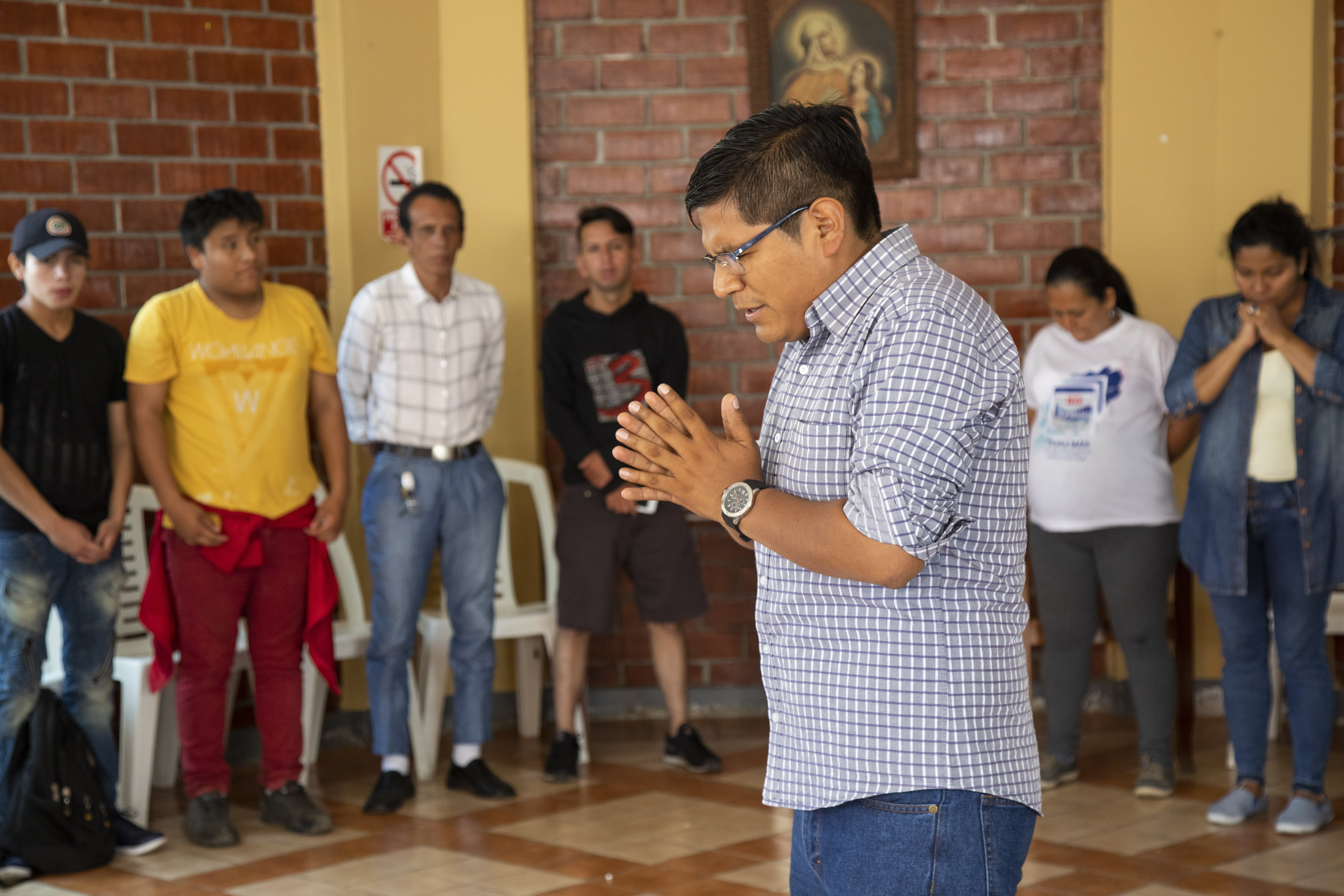 Abraham Luque, a catechist from the Scalabrinian Parish of Our Lady of the Perpetual Help, prays during a Christmas event at the Scalabrini welcome center in Lima, Peru, in this Dec. 16, 2018, file photo. (CNS photo/Oscar Durand)

Catholic men and women formally installed in the new ministry of catechists are not simply religious education teachers but are engaged in "the proclamation and transmission of the faith, carrying out this role in collaboration with the ordained ministers and under their guidance," said a letter accompanying the Latin text of the Rite of Institution of Catechists.

Archbishop Arthur Roche, prefect of the Congregation for Divine Worship and the Sacraments, released the Latin text and a letter Dec. 13, seven months after Pope Francis instituted the "ministry of catechist" as a formal office and vocation in the church.

Bishops' conferences will be responsible for translating the rite into their local languages and seeking Vatican approval for local adaptations, which are expected given the variety of roles catechists play in different parts of the world.

In 2022, Archbishop Roche said, his office would release the revised text for the Rite for the Institution of Lectors and Acolytes, a ministry Pope Francis opened to women in January.

"The term 'catechist' indicates different realities in relation to the ecclesial context in which it is used," Archbishop Roche wrote. "Catechists in mission territories differ from those working in churches of long-standing tradition. Moreover, individual ecclesial experiences also produce very different characteristics and patterns of action, so much so that it is difficult to give it a unitary and synthetic description."

In different parts of the world, he said, formally recognized catechists can be found "guiding community prayer, especially the Sunday liturgy in the absence of a priest or deacon; assisting the sick; leading funeral celebrations; training and guiding other catechists; coordinating pastoral initiatives; human promotion according to the church's social doctrine; helping the poor; fostering the relationship between the community and the ordained ministers."

Archbishop Roche said people should not be surprised by the "breadth and variety of functions" associated with catechists because "the exercise of this lay ministry fully expresses the consequences of being baptized and, in the particular situation of the lack of a stable presence of ordained ministers, it is a participation in their pastoral action."

"This is what the Code of Canon Law affirms when it provides for the possibility of entrusting to a non-ordained person a share in the exercise of pastoral care in a parish, always under the moderation of a priest," he wrote. "It is necessary, therefore, to form the community so that it does not see the catechist as a substitute for the priest or deacon, but as a member of the lay faithful who lives their baptism in fruitful collaboration and shared responsibility with the ordained ministers, so that their pastoral care may reach everyone."

Those chosen for the ministry of catechist, he said, are to be called by their bishop and instituted in what the church calls a "stable" way. While the specific terms of their ministry are up to the local bishop, they are installed in the ministry only once and for a substantial period of time.

Archbishop Roche also include a list of those who "should not be instituted as catechists":

The pope's institution of a formal ministry of catechist, he said, also should not end the practice of all a parish's or school's religion teachers being commissioned and given a mandate at the beginning of each school year.