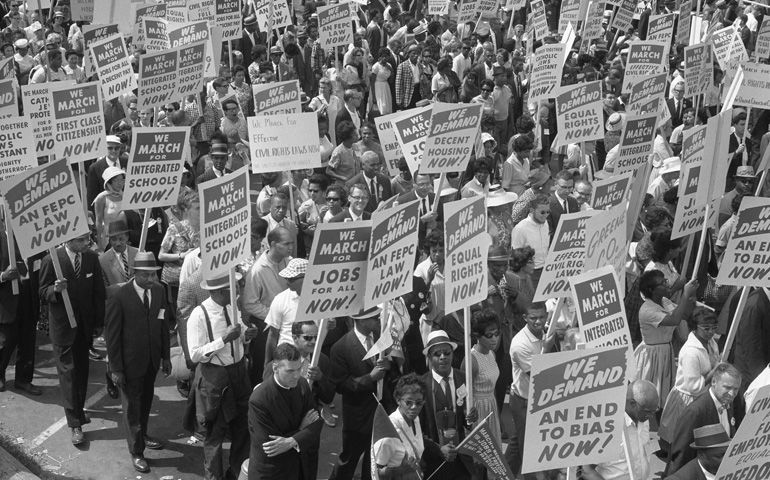 Demonstrators holding signs march during the 1963 March on Washington. (CNS/Library of Congress)

Washington — Fifty years ago, on the morning of the March on Washington, Betty Stallworth said the major news outlets were predicting the march would be a bust.

"My husband and I decided to go. I said I was going if I was the only person on the Mall," she recalled in an interview with the Catholic Standard, newspaper of the Washington archdiocese.

Stallworth, then in her late 20s, had taken leave that day from her job as a correspondence clerk with the Department of the Army at the Pentagon.

She asked a neighbor to watch the couple's five young children, and she and her husband, William, headed to their church, St. Augustine -- which has long billed itself as the "mother church" for African-American Catholics in the archdiocese of Washington -- to join parishioners marching together down 15th Street.

That day, Aug. 28, was coincidentally the feast of St. Augustine, and the parish had hosted out-of-town marchers then held a special Mass before parishioners joined the march, walking behind banners representing the parish.

"It was a good-sized group," said Stallworth, who has been a St. Augustine parishioner for more than 50 years and sings in the parish's chorale. "It was a happy crowd, a determined crowd."

The media's predictions were wrong. "When we got downtown to the Mall, there were people coming from every direction," she said. Stallworth even bumped into her aunt and uncle and people from her hometown of Savannah, Ga.

She compared the crowd to a tradition that black churches have: an annual homecoming. "It was like a homecoming, everyone coming together."

During the rally, her husband periodically lifted her up so she could see above the crowd. And when she heard the Rev. Martin Luther King Jr.'s speech, what touched her heart the most as a mother of five was near the end of the speech, when King talked about the future, "when little black boys and girls, and little white boys and girls, would join hands together."

"The truth is, it brought tears to your eyes," said Stallworth, who grew up in the segregated South.

"A lot of segregation is based on keeping minorities from having a better education. That's why I pushed, in my family, education," she said.

She and her late husband sent all five of their children to St. Augustine School, and two of their grandchildren also graduated from the school.

St. Augustine Parish traces its beginnings to 1858, when free men and women of color, including former slaves, established a school, to give their children a foundation of faith and a strong education for a better future. Today, St. Augustine parishioners continue to sacrifice to keep their school doors open for families.

[Mark Zimmermann is editor of the Catholic Standard, newspaper of the archdiocese of Washington.]

What US culture can learn from the church about COVID-19