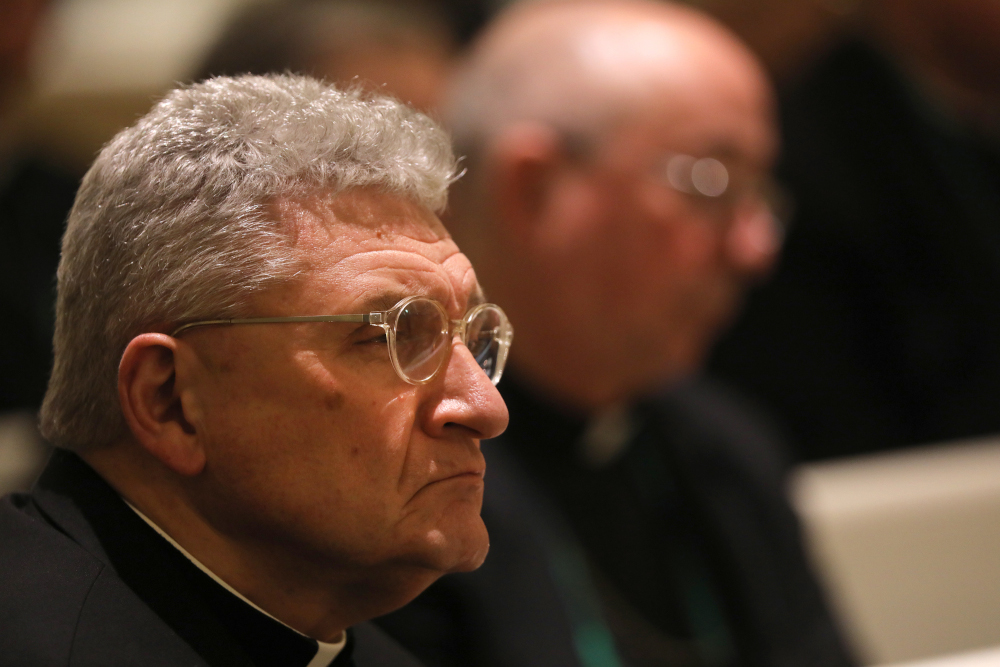 Bishop David Zubik of Pittsburgh attends a prayer service in the Chapel of the Immaculate Conception at Mundelein Seminary Jan. 2, 2019, at the University of St. Mary of the Lake in Illinois, near Chicago. (CNS/Bob Roller)

Pittsburgh Bishop David Zubik has released a five-point action plan in his pastoral letter, "The Church Healing," responding to what he heard from Catholics and non-Catholics in the diocese during listening sessions.

The sessions have been held since the August 2018 release of the Pennsylvania grand jury report on alleged child sexual abuse by Catholic clergy and other church workers in six dioceses in the state.

The bishop's letter goes beyond issues directly related to sexual abuse, addressing accountability and transparency in church governance, spiritual and human formation for clergy and seminarians, and promising additional channels for parishioners to bring their concerns to the bishop.

Some steps continue and strengthen long-standing practices, while others are new initiatives, Zubik wrote in the pastoral, issued in early March. The full text was published in the March 8 issue of the Pittsburgh Catholic, the diocesan newspaper.

"Victims/survivors and their loved ones have been instrumental in helping me to define these steps. Victims/survivors will continue to shape our diocesan response to assist those who have been abused, to strengthen our efforts to prevent future abuse by any representative of the church, and to restore whatever is broken in the body of Christ."

"The Church Healing" opens with Psalm 147:3: "The Lord heals the brokenhearted and binds up their wounds."

The first action step is "healing and enhanced support for victims/survivors, their families and loved ones."

Long-standing diocesan programs will be streamlined and strengthened with new initiatives, with Bishop establishing the Secretariat for the Protection of Children, Youth and Vulnerable Adults.

The secretariat will include four offices that will: receive allegations and coordinate diocesan response; assist parishes in providing spiritual and emotional support to victims/survivors; oversee background checks and child protection training for all clergy, staff and volunteers; and conduct any diocesan inquiry into allegations that would not be the purview of law enforcement and monitor clergy who were removed from ministry due to substantiated allegations of child sexual abuse.

This first action step also includes the Independent Reconciliation and Compensation Program, or IRCP, which was launched in January to help victims/survivors financially.

Zubik also will expand the role of the Independent Review Board, which was created in 1989 and is composed of individuals from disciplines pertinent to assessing allegations of child sexual abuse.

"In addition to making recommendations to the bishop regarding an accused cleric’s suitability for ministry, and reviewing pertinent diocesan policies," the pastoral said, "the board will meet quarterly to receive an update on all issues related to any allegation of sexual abuse or any inappropriate sexual behavior received within the previous three months."

The Pittsburgh Diocese also is "establishing support groups and spiritual retreats for victims/survivors," the pastoral said.

The second action step Zubik outlined in the pastoral is "greater financial transparency." The diocese will add a broader scope of financial information over the next 10 months, including:

– The aggregate amount of past victims’ compensation through legal settlements and the total amount disbursed to victims/survivors from the IRCP.

– The amount of the legal fees incurred by the diocese related to clergy sexual abuse.

– The annual amount that the diocese is canonically obligated to pay as sustenance to clergy who have been removed from ministry due to substantiated allegations of child sexual abuse.

Zubik also plans to expand the membership of the Diocesan Finance Council to include representatives from each of the diocese's six counties of the diocese.

The council is made up of lay business and finance professionals who review financials, provide advice, promote best practices and whose consent is canonically required for certain large expenditures.

Action step three will be "increased accountability," with Zubik's creation of the Church Healing Commission, consisting of up to 12 laypeople who are Catholic and non-Catholic, including abuse survivors, with representation from all six counties in the Diocese of Pittsburgh.

This advisory commission will assist him in monitoring progress on the five-point plan.

He also will also will establish an independent, third-party system for reporting concerns about suspected financial, professional, or personal misconduct in any parish, school, institution or office of the diocese.

The Diocese of Pittsburgh will continue to update its public list of diocesan clergy with allegations of child sexual abuse.

Zubik said the fourth action step will be "ongoing spiritual and human formation for clergy and seminarians."

The diocese has had long-standing efforts to screen seminary applicants, evaluate candidates for ordination, and provide spiritual and psychological support to priests and deacons., he said, but he also promises that "every possible step is being taken to provide current and future clergy with the support they need to live a healthy, chaste life with a heart free to love as Jesus loves, by laying down their lives for others."

The final and fifth step is "continued listening to seek truth and reconciliation."

Zubik said he will continue to meet individually with victims/survivors and also will hold eight annual public listening sessions on various matters of concern to Catholics.

"God is always ready to listen to us. Every leader who is ordained to serve Jesus Christ, and to follow in his footsteps, must listen, too," he wrote.

The pastoral letter is not the final word about "The Church Healing," Zubik said.

"Through continued listening and dialogue to seek the best path forward, through pastoral care and advocacy for victims/survivors of abuse and through the healing of hearts and lives, the body of Christ that is suffering together can also be renewed together," he wrote.