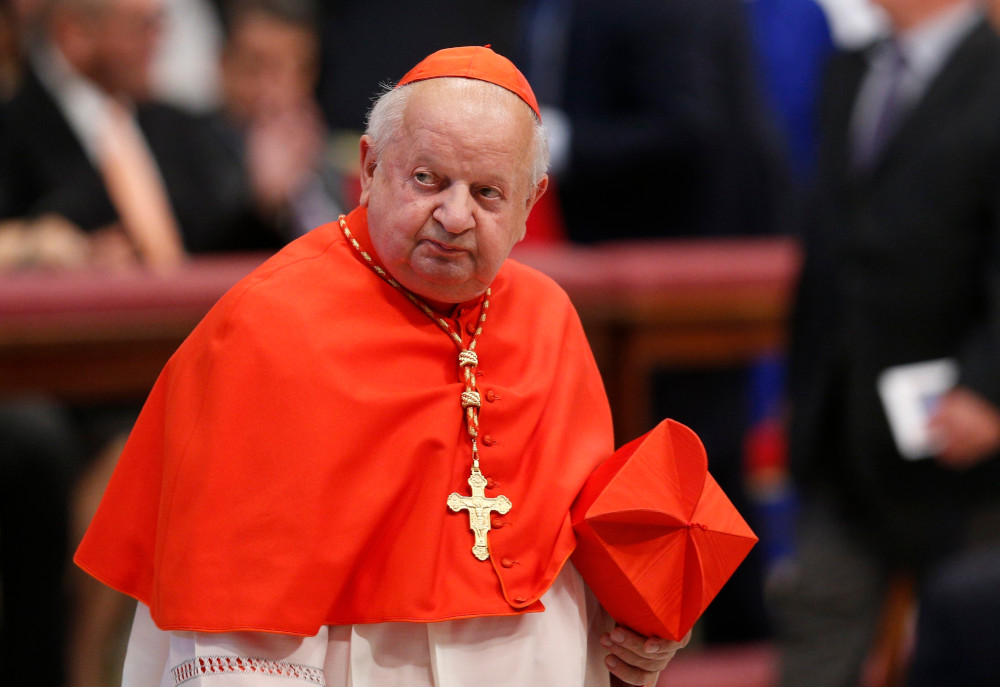 Polish Cardinal Stanislaw Dziwisz of Krakow, Poland, arrives for a consistory in St. Peter's Basilica at the Vatican in this June 28, 2018, file photo. (CNS/Paul Haring)

Poland's State Commission on Pedophilia said it would initiate procedures against bishops "for not notifying law enforcement authorities, despite their knowledge that minors were being harmed by their subordinates."

Meanwhile, the TVN-24 channel published a leaked letter naming Cardinal Stanislaw Dziwisz, retired archbishop of Krakow, and three bishops from the suffragan Diocese of Bielsko-Zywiec, and said all could face three years in jail for failure to report "credible information" about crimes.

Dziwisz, who served as the Polish pope's secretary for 39 years, was accused in a November 2020 TVN-24 documentary of ignoring abuse complaints after becoming archbishop of Krakow in 2005.

The cardinal dismissed the claims in a TV interview, citing his four decades of "service to the church, pope and Poland," but said he counted on a "transparent investigation" and "proper presentation of the facts."

In a January statement, the Krakow prosecutor's office said it had found no "evidence of criminal activity" against Dziwisz, since the legal obligation to report abuse allegations to police had only entered into force in 2017. The cardinal retired as archbishop of Krakow in December 2016.

However, opposition politicians in Poland have continued to level accusations against the cardinal.

Janusz Szymik, a former victim of clerical abuse from the Bielsko-Zywiec Diocese, told TVN-24 March 11 his case had been "swept under the carpet for many years" by Dziwisz and other bishops. Szymik added that, after testifying before the state commission Feb. 17, he was confident it would take necessary action.

In two late-February statements, the State Commission on Pedophilia, which is investigating sexual crimes against children under 15, said Catholic clergy accounted for a tenth of the abuse cases it had investigated. It said it had asked Poland's 44 archdioceses and dioceses to share files on canonical proceedings against other priests.

On March 11, the same day the state commission announced proceedings, Archbishop Wojciech Polak of Gniezno said "systemic actions" by the church to prevent further abuse were "decisively changing mentalities and procedures," adding that the church was now cooperating fully with state prosecutors in line with civil and canonical regulations.

The controversy follows a wave of abuse-related allegations against Polish church leaders. Bishop Edward Janiak of Kalisz was forced to resign in October after TV documentary claims that he brushed aside complaints against local priests and failed to comply with Polish law and Vatican guidelines.