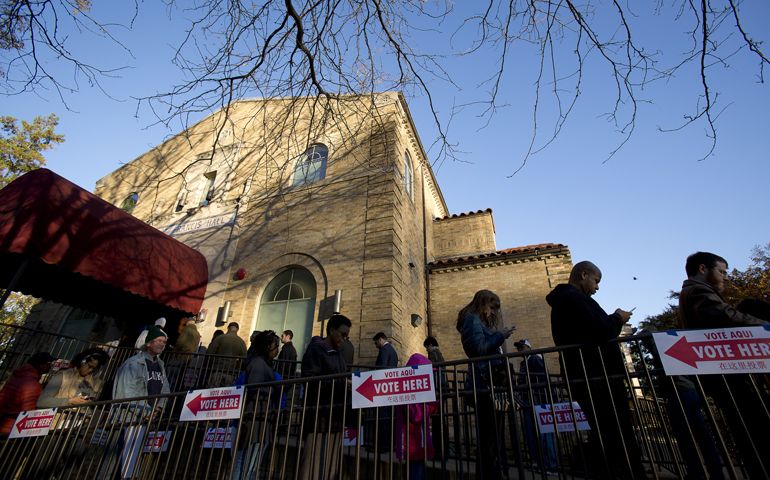 It came just before 3 a.m. Eastern time Nov. 9. Donald Trump walked on stage at the New York Hilton Midtown and announced, "I've just received a call from Secretary Clinton. She congratulated us … on our victory, and I congratulated her and her family on a very, very hard-fought campaign."

Hillary Clinton, the Democratic candidate for president, had conceded the race to her Republican opponent, Trump. Her long quest for the presidency ended, and Trump was making his first steps as president-elect.

Trump thanked Clinton, saying, "We owe her a major debt of gratitude for her service to our country." He said it was time to "bind the wounds of division" and urged "all Republicans and Democrats and independents across this nation … to come together as one united people."

At the Trump celebration, the crowd in front of the president-elect and the family and campaign staff who stood behind him were exuberant and celebratory, but also somewhat restrained. Television pundits explained that the victory had taken the Trump campaign by as much surprise as it had the Clinton campaign, the media observers and the millions of voters who had anticipated a Clinton victory party.

Before the concession was public, the Clinton campaign had emptied the ballroom at Jacob K. Javits Convention Center in New York City, reserved for a party they would not have. Clinton herself would not speak for another six hours, in another hotel, to a somber audience of supporters and staff.

"Last night, I congratulated Donald Trump and offered to work with him on behalf of our country. I hope that he will be a successful president for all Americans," she said. "This is not the outcome that we wanted … and I'm sorry that we did not win this election. … This is painful and it will be for a long time."

She urged her supporters to remember the big themes of their campaign and not to give up that fight: "Our constitutional democracy demands our participation, not just every four years, but all the time. So let's do all we can to keep advancing the causes and values we all hold dear. Making our economy work for everyone, not just those at the top, protecting our country and protecting our planet."

She continued: "This loss hurts, but please never stop believing that fighting for what's right is worth it."

One sentence in her speech hinted at the forces that had defeated her: "We have seen that our nation is more deeply divided than we thought."

Trump too acknowledged that his surge to victory had been spurred by a voting bloc that had until then felt neglected at best and exploited at worst. His pledge was "The forgotten men and women of our country will be forgotten no longer."

His business success, he said, was built on tapping "the untapped potential in projects and in people all over the world. That is now what I want to do for our country. … It's going to be a beautiful thing. Every single American will have the opportunity to realize his or her fullest potential."

Religious voters, specifically evangelicals, Catholics and Mormons, voted for Trump by strong margins — in some cases larger than they had given to GOP presidential nominee Mitt Romney in 2012.

Trump never cast himself as a particularly religious person, and prominent evangelicals, including Southern Baptist Russell Moore, railed against Trump's behavior toward immigrants, women and other groups as un-Christian, but white evangelicals still voted for Trump, which shouldn't have surprised anyone, according to Robert P. Jones, CEO of PRRI.

Catholics in general voted for Trump over Clinton 52 percent to 45 percent. That's despite Pope Francis' and other prominent Catholics' rebuke of the candidate for railing against immigrants and other minority groups.

White Catholics in both 2012 and 2016 went for the GOP candidate, their support for Trump this year just over the 59 percent they gave to Romney. Latino Catholics went for Clinton over Trump, 67 percent to 26 percent, but Obama got 75 percent of their votes four years ago.

The Mormon vote, the most important in overwhelmingly Republican Utah — where more than 60 percent of people belong to the Church of Jesus Christ of Latter-day Saints — gave Trump an easy win in the state.

Given Mormons' reputation for clean living and their embrace of traditional values, there was even some talk in the past few weeks about the red state turning blue, or at least purple.

But the backlash against Trump did not benefit Clinton. Anti-Trump votes instead seemed to gravitate to McMullin, who is Mormon.

Looking to the future

While the politicians — as they do after every election — called for unity for the sake of the country, scholars and advocates of both sides were striving to make sense of the results.

"I am as yet unable to imagine the future — I can't think about the Supreme Court, the fate of immigrants, race relations, Obamacare, the economy, or any other issue," said Cathleen Kaveny a law professor at Boston College. "I cannot get Donald Trump's Twitter feed and the nuclear codes out of my nightmares."

Said John Gehring, Catholic program director at Faith in Public Life, "I'm struggling to find the words to process the fact that a bully who vowed to ban Muslims from our country, boasts about sexual assault, demonizes immigrants and called Pope Francis 'disgraceful' was elected."

He added, "As a Christian and a father of young children, I'm anguished. But as a Christian, I'm also committed to walking the hard road of faith and hope. I don't understand Catholics who supported Trump, but there is too much at stake not to work for common ground and the common good."

Laura Barrett, the new executive director of Interfaith Worker Justice, called this Election Day "a dark day in American history. A man who built the foundation of his campaign for the White House on some of the most disturbing elements of our nation — racism, xenophobia, sexism — is now set to become the most powerful leader in the world."

"Whether it's health and safety on the job, the ability to recover stolen wages from unscrupulous employers, or progress toward a living wage, we can't assume any worker justice victory is safe from being rolled back under a Trump presidency," Barrett said.

Meanwhile, Grazie Pozo Christie, a member of The Catholic Association, which claims to be "dedicated to being a faithful Catholic voice in the public square," welcomed Trump's victory. "Catholics, like the rest of America, have voted for drastic change," she said in a statement. "Faced with a Democratic Party platform that runs counter to non-negotiable Catholic principles like the dignity of human life, they chose Mr. Trump."

Paula White, a member of Trump's evangelical advisory board and pastor of the New Destiny Christian Center in Florida, said in a written statement, "Far more than what divides us, this election has revealed what unites us."

She praised a newfound solidarity among evangelicals, Catholics, Pentecostals, charismatics and Baptists. "What will come from these new and renewed relationships will have far more impact than anything that could be realized through the election of any politician. We aren't ending this season so much entering a new one."

But not all evangelicals were for Trump. Moore, president of the Southern Baptist Convention's Ethics and Religious Liberty Commission, has been one of Trump's most outspoken evangelical critics. Early Nov. 9, Moore urged Christians to pray for Trump.

"No matter what the racial and ethnic divisions in America, we can be churches that demonstrate and embody the reconciliation of the kingdom of God," he said in blog post. "The most important lesson we should learn is that the church must stand against the way politics has become a religion, and religion has become politics."

Matthew Green, who teaches politics at The Catholic University of America, is cautious about making predictions. "With Trump's victory, we are entering uncharted territory. Never before in our history have we elected a president with no experience in either elected government or military leadership," he said.

"In addition, while congressional Republicans have good reasons to rejoice at the prospect of achieving major policy goals with unified government, it's still not clear how much agreement there is between them and Trump," said Green, who specializes in the study of Congress.

"In many ways, the GOP remains a deeply fractured party. Trump's victory gave credence to those suggesting the party needs to abandon some of its core principles and embrace Trump's nationalist, isolationist, white-identity platform. I expect many Republicans in Congress will be hesitant to do so."

Congratulating Trump, the Vatican secretary of state, Cardinal Pietro Parolin, expressed hope that people would work together "to change the global situation, which is a situation of serious laceration, serious conflict."

Parolin was asked about the polemics that arose earlier in the year between Trump and the pope over the question of immigration. Francis had said, "A person who thinks only of building walls, wherever they may be, and not building bridges, isn't Christian."

"Let's see how the president acts," Parolin said Nov. 9. "Normally, they say, it is one thing to be a candidate and another to be president, to have that responsibility."

"It seems premature to make judgments" until Trump is inaugurated and begins making decisions, he said.

Archbishop Joseph Kurtz of Louisville, Ky., president of the U.S. bishops' conference, outlined an ambitious agenda in a Nov. 9 post-election statement that congratulated Trump and all election victors.

"The bishops' conference looks forward to working with President-elect Trump to protect human life from its most vulnerable beginning to its natural end. We will advocate for policies that offer opportunity to all people, of all faiths, in all walks of life," he said.

Chicago Cardinal-designate Blase Cupich issued a statement pledging "my prayers for those elected and I ask the Lord to enlighten and sustain them in their service to all the people of our country."

"I also pray for those who held opposing positions, that they continue to participate in our democracy as we strive to work together in respectful harmony for the common good."

President Barack Obama addressed the nation midday Nov. 9. He said that he had spoken with Trump in the early morning hours, delivering the message that we are "all rooting for his success" and inviting him to the White House Nov. 10 for the first meeting about the transition from one administration to another.

He acknowledged that he and Trump had had their differences, but that they were "all on the same team." Politics, he said, are like an "intramural scrimmage."

On the Middle East, Trump sounds like a statesman

Politics, Teilhard, and the world's future