Care for 'the least among us' should guide Congress 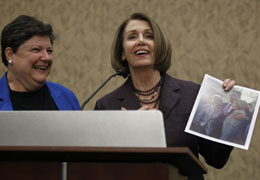 House Speaker Nancy Pelosi, D-Calif., holds up a picture of herself with President Barack Obama and Secretary of Health and Human Services Secretary Kathleen Sebelius, as Trinity Washington University President Patricia McGuire looks on at an event on Capitol Hill in Washington May 6. Pelosi was attending part of a conference called "A Washington Briefing for the Nation's Catholic Community." (CNS photo/Peter Lockley)

WASHINGTON -- Jesus' admonition to care for "the least among us" is a philosophy she tries daily to bring to the work of Congress, said House Speaker Nancy Pelosi May 6, speaking to participants in a Washington briefing sponsored by the National Catholic Reporter and Trinity Washington University.

She also urged priests and bishops to speak from the pulpit about the need for comprehensive immigration reform.

"The cardinals, the archbishops, the bishops that come to me ... say, 'We want you to pass immigration reform,' and I said, 'I want you to speak about it from the pulpit,'" Pelosi told a session of the conference gathered at the Capitol. "Some (who) oppose immigration reform are sitting in those pews, and you have to tell them that this is a manifestation of our living the Gospels."

In remarks that quoted Pope Benedict XVI's 2006 encyclical "Deus Caritas Est" ("God Is Love") and St. Augustine, Pelosi, a graduate of Trinity, described the religious influences on her actions in Congress as stemming from Christ's teachings about loving one another and caring for those in society who have the least.

Quoting St. Augustine, who said "a state that is not governed by justice is no more than a gang of thieves," Pelosi said the daily struggle in Congress boils down to the question: "Are we governing according to justice or are we a bunch of thieves?"

The California Democrat, a Catholic who has been criticized by some in the church for supporting legal abortion, talked about the necessity of making judgments in governing and said that she finds herself regularly reminding fellow members of Congress that Jesus' call to "love your neighbor" doesn't just mean the easy-to-love person in the distance, but the political opponent at their side.

"I have to remind a very diverse Congress ... that love sometimes means you let other versions exist," she said, adding that in this context she takes "love" to mean working to build consensus, rather than insisting that one's own version of legislation is the only one that can survive.

The two-day conference included speakers on a variety of political and religious topics. During the group's session on Capitol Hill, several members of Congress, in addition to Pelosi, stopped in for informal remarks.

But Dionne voiced dismay at what he described as "replicating within the church the same process happening outside the church," of digging in along ideological lines rather than working for common interests.

He gave the example of the recent debate over national health care reform legislation, when the U.S. bishops opposed the final bill over their concerns that it might enable some abortions to receive federal funds. Other Catholic groups, including a coalition of nuns, supported the bill, saying theirs was "the real pro-life stance."

"I hope we never repeat that," Dionne said. "I hope instead of recriminations this might lead to some dialogue."

WASHINGTON -- Humans are "oriented toward communion," a reality ignored by the prevalence of abortion, said longtime pro-life figure Helen Alvare.

In a culture marked by the legal availability of abortion, "people tend to avoid thinking about our common humanity," said Alvare, a law professor at George Mason University in Virginia, an adviser to the U.S. bishops' Committee on Pro-Life Activities, and a consultant to the Pontifical Council for the Laity.

"We are built around -- and toward -- living with and for others," Alvare said during an April 6 address at "A Washington Briefing for the Nation's Catholic Community," co-sponsored by Trinity Washington University and the National Catholic Reporter weekly newspaper.

Abortion, with its legality guaranteed by a judicial insistence on individual rights, neglects the "public understanding ... that the family is a crucial place," Alvare said.

The Supreme Court's use of individual rights as a framework for the 1972 case Roe v. Wade, which sought to legalize abortion, and the 1989 case Planned Parenthood v. Casey, which was a test of a state's rights to impose controls on abortion, has seeped into other areas of law, according to Alvare.

It was used to advance the legal right to both polygamy and same-sex marriage, as well as in a Texas case in which a court found that a "one-night stand" could be considered equal to marriage, Alvare said.

"Abortion law matters," she added, because it adheres to an "individualistic, anti-communitarian view of the world."

Alvare also held the culture of abortion responsible for bringing about unwelcome changes in society. One example she used was the rise in births to unwed mothers, from 5 percent at the advent of the birth-control pill 50 years ago to 41 percent in 2008, according to a Pew Research Center study issued May 6.

"No matter what race or sex or economic status, people want to marry and have children," Alvare said. However, she said, "people on the margins" tend to suffer the most from "changing market conditions," including the marriage market.

The number of abortions performed in the United States, even though it has declined in recent years, remains at "a dramatically high rate of more than a million a year," Alvare said.

"After a couple of decades in the field, I never run across an opponent who says this (abortion) is not killing someone. The conversation about whether this is killing or not is over," Alvare said. "Everybody knows in their heart we wish we could stop this."

Before her current posts, Alvare served as a law professor at The Catholic University of America's Columbus School of Law. She also was director of public information for the U.S. bishops' Secretariat for Pro-Life Activities, and an attorney in the U.S. bishops' Office of General Counsel.

Poll shows 'dramatic' loss of confidence in pope, US bishops

WASHINGTON -- Catholics' approval ratings of Pope Benedict XVI's job performance while in office had dropped 15 points over the past two years, according to a new poll conducted by Zogby Interactive and commissioned by the National Catholic Reporter weekly newspaper.

The numbers slid from 71 percent in April 2008, as the pope made his first pastoral visit to the United States as pontiff, to 56 percent in April 2010, as Pope Benedict and the Vatican came under increased media scrutiny over past handling of clerical sexual abuse cases.

"Fifteen points is dramatic," said John Zogby, who runs the polling firm that bears his name, at a May 6 luncheon in Washington during which the poll results were issued.

Sixty-two percent of Catholics polled said Pope Benedict had done a poor or fair job of handing the clergy sexual abuse problem while pope, compared with 38 percent who said his handling was good or excellent. And 65 percent said his handling of clergy sex abuse issues before becoming pope were poor (44 percent) or fair (21 percent). Seventy-two percent said the U.S. bishops' handling of the abuse crisis had been either fair or poor.

Still, Catholics in the survey said by a 4-1 margin that Pope Benedict should not resign, with 64 percent saying he should not quit while 16 percent said he should. The other 20 percent said they did not know or were not sure.

The survey of 707 U.S. Catholics -- 20 percent of them Hispanic, according to Zogby -- had a margin of error of plus or minus 3.7 percentage points.

Catholics gave President Barack Obama worse job approval ratings than the nation as a whole, with Catholics disapproving of his performance by a 66-34 percent margin, compared with 50-49 percent disapproval ratings for the nation. Catholics make up a bit more than 23 percent of the U.S. population.

By a 68 percent to 27 percent margin, Catholics believe the country is in worse shape now than it used to be, compared with a 53-38 percent margin for the nation as a whole.

Catholics indicated they will vote for Republicans in the November midterm elections by a 2-1 ratio, while all survey respondents favor the GOP by a 42-38 percent margin.

Catholics differed from the nation overall in their support of health care reform. Catholics were against it, 60 percent to 33 percent, while the nation as a whole was in favor of it, 53 percent to 43 percent.

"I don't believe there is a 'Catholic vote,'" Zogby said. Instead, he added, "this is the ultimate swing vote."

When asked which party best represents their values, a majority of Catholics, 58 percent, said it depends on the issue. Of those who expressed a preference, 25 percent said the Republicans while 12 percent said the Democrats.

Sixty-seven percent of Catholics, and majorities in each age subgroup, said the Eucharist should not be denied to politicians who take stands contrary to church teaching.

A 58 percent majority of Catholics said women should be ordained to the Catholic priesthood, including 48 percent plurality of weekly Massgoers. The only age group to disagree were those 65 and over, 49 percent of whom said they should not be ordained. But 78 percent of young Catholics ages 18-29 favored women's ordination.

Politics | Care for 'the least among us' should guide Congress

Both sides gear up for gay marriage fight in North Carolina