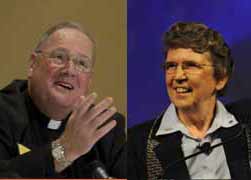 WASHINGTON -- A recent exchange of letters between the Catholic Health Association and the U.S. bishops' conference does not reflect any change in positions by the CHA, says the association's president.

In reporting on an exchange of letters between the CHA president and the president of the U.S. bishops conference, in which the CHA head affirmed that the local bishop is the "authoritative interpreter" of the ethical and religious directives that guide Catholic health care, some news accounts characterized the CHA letter as a reversal of earlier statements or a concession to the bishops.

When contacted by NCR for clarification, Sr. Carol Keehan, a Daughter of Charity and president of the CHA, said the association's position has not changed.

"CHA has constantly taught that the bishops have the right to make the decisions. They have the right to interpret the ERDs [Ethical and Religious Directives for Catholic Health Care Services] in their own diocese," Keehan told NCR Feb. 1.

Bishop Thomas Olmsted of Phoenix declared in December that St. Joseph Hospital and Medical Center there could no longer call itself Catholic because it had violated the U.S. bishops’ Ethical and Religious Directives for Catholic Health Care Services by killing an unborn child in an operation to save the life of the critically ill mother.

At that time, Keehan said that in the procedure in question the hospital "carefully evaluated the patient's situation and correctly applied the Ethical and Religious Directives for Catholic Health Care Services to it, saving the only life that was possible to save."

The U.S. Conference of Catholic Bishops released a letter Jan. 31 from Keehan to Archbishop Timothy Dolan of New York, bishops' conference president, in which she clearly affirmed that Bishop Olmsted had the right to make the decision he did.

The CHA has always told its members that “an individual Bishop in his diocese is the authoritative interpreter of the ERDs,” Keehan wrote.

Keehan told NCR Feb. 1 that in her December statement she did not dispute the bishop’s right to make the decision and the association has never said bishops do not have that right.

She referred this reporter to an NCR article by John Allen, posted online Jan. 31, in which Allen quoted Dolan as saying: "[Keehan] feels very strongly that the decision was terrible, but she knows that the bishop of the diocese is the authentic interpreter and implementer" of the ERDs.

It's good to be home, even in this political climate