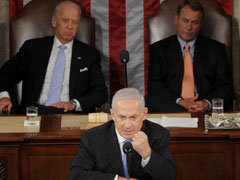 Israeli Prime Minister Benjamin Netanyahu speaks during a joint meeting of Congress at the U.S. Capitol in Washington May 24, 2011. (Newscom/Getty Images/AFP/Saul Loeb)

In response to President Barack Obama’s clear -- albeit understated and unenforced -- calls for an end of the Israeli occupation of most of the Palestinian West Bank, both Republicans and Democrats on Capitol Hill have mobilized to undercut the administration’s timid efforts and throw Congress’ support to the right-wing Israeli government of Prime Minister Benjamin Netanyahu.

For example, as Netanyahu arrogantly rejected Obama’s modest parameters for a peace settlement in a speech before a joint session of Congress last year, members of Congress gave him no less than 29 standing ovations, more than Obama has ever received during his State of the Union speeches. The most raucous applause came when Netanyahu rejected Obama’s call that the starting point for negotiations on the final borders between Israel and a Palestinian state be based on Israel’s internationally recognized borders prior to Israel’s 1967 invasion of the West Bank.

U.N. Security Council Resolution 242 -- long considered the basis for peace by both Democratic and Republican administrations -- reiterates the longstanding international legal principle regarding “the inadmissibility of the acquisition of territory by force.” This was irrelevant to the U.S. Congress, the vast majority of whom gave Netanyahu a particularly enthusiastic standing ovation when he denied that Israeli forces and settlers on the West Bank were foreign occupiers. They cheered when he specifically insisted that Israeli occupation forces would remain as far east as the Jordan Valley, countering Obama’s call for their withdrawal. Congress cheered further when Netanyahu justified his insistence that the West Bank was Jewish land simply because it was “the land of our forefathers ... to which Abraham brought the idea of one God [and] where David set out to confront Goliath.”

For example, although there has never been any real debate regarding the commitment of the United States to Israel’s security, a House resolution passed in May takes the unprecedented step of insisting that that commitment include defending Israel as an explicitly “Jewish state.” The Israeli government certainly has the right to identify itself as a Jewish state or anything else. But this clause not only demonstrates a lack of concern about the security interests of the more than 20 percent of Israelis who are not Jewish and the millions of Palestinians who are effectively under Israeli military control, it appears to be making an unprecedented commitment by the United States to guarantee the religious, ethnic or cultural identity of a foreign country.

Similarly, although the Palestinian Authority and virtually every other Arab government have pledged to make peace with Israel in return for an Israeli withdrawal from occupied Arab territory, Congress insists that the United States encourage Israel’s neighbors also to recognize Israel “as a Jewish state.” The Palestinian Authority and other Arab states -- noting that no peace treaty in history has ever required recognition by one state of the other’s religious, ethnic or cultural identity -- reject such a prerequisite. By insisting upon this new provision, which was not required of Egypt and Jordan in their treaties with Israel, Congress appears to be effectively sabotaging any additional peace agreements between Israel and its Arab neighbors.

As an indication of how both parties are now even further to the right than former President George H.W. Bush, Congress has called for additional unconditional loan guarantees to Israel. The former Republican president had tried to make these conditional on a freeze in construction of Israel’s illegal settlements in the occupied territories.

Congress has also called for dramatically increasing annual U.S. military aid to Israel over this year’s record of $3.1 billion. U.S. military aid to Israel is already higher than the foreign aid programs to all of sub-Saharan Africa combined. With overall foreign aid already being reduced, this will translate into even deeper cuts in international assistance programs that aid the poor.

This pressure has had an impact. The Obama administration has backed off its insistence that Israel stop building additional illegal settlements. On the eve of Secretary of State Hillary Clinton’s visit to Israel last month, the Netanyahu government reneged on an earlier promise and announced massive subsidies for the construction of new settlements. The visiting U.S. secretary of state spoke only of the need for peace talks to resume. Indeed, Clinton refused to travel to nearby Ramallah to meet with Palestinian leaders and focused the discussions with Israeli officials on Egypt and Iran, not Palestine. It is easy to try to blame right-wing groups like the American Israel Public Affairs Committee, but the vast majority of pro-Netanyahu Democrats are in safe political districts and there would be little negative political consequences of rejecting the Israeli prime minister’s extremism and instead supporting Israeli moderates. Indeed, polls show the overwhelming majority of American Jews are far closer to Obama’s position than that of Netanyahu and Congress.

The problem is that most congressional Democrats appear to sincerely embrace Netanyahu’s right-wing militarism and know they can get away with it because “progressive” organizations and political action committees will support them anyway. This contrasts with the 1980s, when their counterparts with comparable positions on Central America were disparaged as “death squad Democrats” and denied such support. Things are different today, however. For example, California Sen. Barbara Boxer, who takes perhaps the most pro-Netanyahu position of any Democratic senator, was named a “progressive hero” in 2010 by the liberal group Democracy for America.

Until liberal groups give the same priority to peace and human rights in the Middle East that they have elsewhere, Obama will be unable to pursue Israeli-Palestinian peace.

[Stephen Zunes is a professor of politics at the University of San Francisco.]

Biden's abortion shift tests the politics of his faith