Editorial: Religious freedom must be anti-discrimination 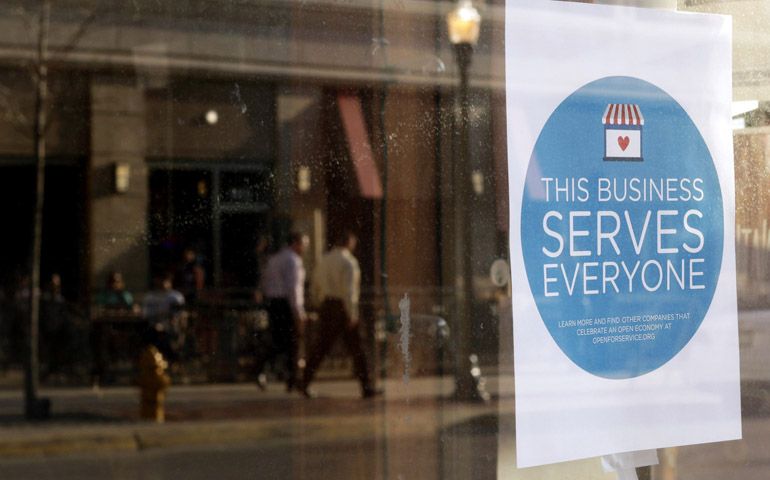 A sign in the window of a barbershop in downtown Lafayette, Ind., on Tuesday (CNS/Reuters/Nate Chute)

"Was I expecting this kind of backlash? Heavens no," Indiana Gov. Mike Pence told reporters Tuesday. Pence was taking fire for signing into law the state's Religious Freedom Restoration Act.

The Indiana law is modeled after 19 other state laws and the federal law known by its acronym RFRA and pronounced "Riff-ra," designed to protect individual religious practices from the heavy hand of government. It is also shaped by the 2014 Supreme Court decision Burwell v. Hobby Lobby, which extended RFRA protection to "closely held" corporations.

Generally, RFRA laws are something we can support. The federal law was passed in 1993 with broad bipartisan support after the Supreme Court upheld the conviction of Native Americans found guilty of violating drug laws by ingesting peyote.

Soon states began passing RFRAs to extend protection against state and local laws. In The Weekly Standard, under a headline that reads, "UVA Law Prof Who Supports Gay Marriage Explains Why He Supports Indiana's Religious Freedom Law," Douglas Laycock of the University of Virginia wrote March 29 about the kinds of cases RFRAs have addressed: "It is illegal to give alcohol to minors, but no one thinks that law should be applied to communion wine, or seder wine at the Jewish Passover. ... [The cases] are about churches feeding the homeless; sometimes the city or the neighbors object. They are about Muslim women wearing scarfs or veils. They are about Amish buggies. ... They are about all the unexpected ways in which a great diversity of religious practices come into conflict with a great diversity of laws and regulations."

On its face, the Indiana law may be something that we could support. One sticking point is the Hobby Lobby-influenced extension of individual protections to corporations. As we noted when the court ruled last July, Justice Ruth Bader Ginsburg's dissent rings true: "The exercise of religion is characteristic of natural persons, not artificial legal entities."

We also find solace in the history of RFRA cases. As Laycock explains, "Nobody has ever won a religious exemption from a discrimination law under a RFRA standard." If Indiana had a comprehensive anti-discrimination law on its books, the backlash to RFRA may have been less vociferous.

The trouble with the Indiana religious freedom law is in how it was conceived. With a ballot initiative that would outlaw same-sex marriage stalled in the Legislature, Republican representatives and Pence, winking and nodding the whole time to opponents of marriage equality, passed the RFRA legislation thinking it would cost them nothing while at the same time bolster support from so-called values voters.

They clearly misjudged this cynical political ploy. Instead of a sop to appease conservative voters, they tossed a grenade into the business community.

Luckily for Pence and those who seek to use RFRA as a stealth attack on the lesbian, gay, bisexual and transgender community, the resolution to this issue is right in front of them. They don't have to repeal the religious freedom law, but they must pass a comprehensive anti-discrimination law to protect LGBT people in employment, housing, education and public accommodations.

The split this controversy exposed in the Republican Party, between business interests and social conservatives, points to implications beyond Indiana. The cozy relationship Republicans have had with traditional-value voters is clearly in question. The Republicans have to decide where they stand on gay rights.

Bishops call for 'mutual respect' in 'necessary dialogue' on RFRA