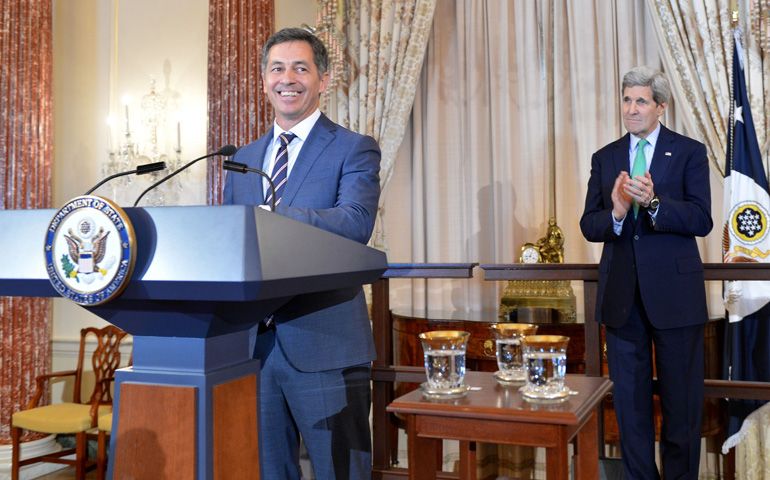 Randy Berry, left, speaks at a welcome reception in his honor while Secretary of State John Kerry watches Feb. 28 at the U.S. Department of State in Washington. (State Department)

Washington — Becoming a father was a prime motivator for Randy Berry to accept what's sure to be a controversial new role at the State Department.

Berry, 50, is the U.S. special envoy for the human rights of gay, lesbian, bisexual and transgender people, the first such post created by a nation, according to the State Department.

In that trailblazing role, he said, he has an opportunity to help his two children grow up in a world more accepting than the one he was born into.

As someone who has "walked the personal journey of coming out," Berry said he knows how crucial positive messages and support are to a U.S. and global LGBT community plagued by young suicides.

"Our children may be straight, they may be gay, I really couldn't care less, but I do want them to be happy," Berry said. "They're likely to grow up in international environments, so I'm interested in working this in a broader space."

It's not going to be easy.

Secretary of State John Kerry has instructed Berry to coordinate the State Department's internal policies on LGBT employees and the department's programs and policies regarding the rights of LGBT people in other countries, by working with governments, civil society and the business community.

Many of the countries most hostile to the LGBT community are U.S. allies in Africa and Asia, including Nigeria, Uganda, Saudi Arabia and Pakistan. All are embroiled in fights with radical Islamic terrorists who also condemn homosexuality and reject U.S. and European pressure to reduce their persecution of LGBT members.

The issue is a "strategic necessity" because greater protections for human rights lead to greater stability and prosperity, Kerry said when he announced the post in February. The announcement came after bills were introduced in Congress by Sen. Edward Markey, D-Mass., and Rep. Alan Lowenthal, D-Calif., to create such a special envoy role.

Several Republican lawmakers who are usually outspoken on foreign policy and human rights did not respond to requests for comment.

J. Peter Pham, director of the Africa program at the Atlantic Council and often a hard-liner on security issues, said creating the position will help highlight U.S. diplomatic concern about the treatment of LGBT people.

"That said, I find it regrettable that with the political climate in Washington it's not feasible to create this role at the level of ambassador," Pham said. "The drawback is ... it might be perceived in some of these African countries this really is not a primary concern."

Berry, a 22-year foreign service officer, has served in the Netherlands, New Zealand, Nepal, Uganda and South Africa, where he met his husband, Pravesh Singh. They have a daughter, Arya, 3, and a son, Xander, 2.

Berry has experienced the changing acceptance of LGBT people firsthand. He joined the State Department shortly after it stopped considering sexual orientation as an automatic barrier to getting a security clearance. Before that, being outed was often a career-ending event. State now offers spouses equal benefits, regardless of gender and orientation.

"Societies, companies and cultures thrive when they realize the value of diversity," he said.

But Berry has no illusions that his message will be received warmly in all circles. "Clearly, not everyone is going to agree with the position we are taking," he said.

Berry said that to accept such objections "you have to believe members of the LGBT community should be discriminated against, should be arrested, detained, subjected to torture and harassment, and should be in some countries executed."

Singling out sexual minorities in that way runs counter to the core American value that people should have the "freedom to be who you are regardless of who you love or your identity," Berry said. "That's a conversation we have to have."

How to have that conversation will be different depending on where it's held, however. Berry said he intends to travel to all corners of the globe with his message, focusing first on heavily Catholic Latin America, where he believes he'll find a receptive audience in Argentina, Uruguay, Brazil, Peru and Colombia, where gay rights have advanced.

There are 80 countries where homosexual acts can lead to arrest. The conversation will have to be more discrete, he said, in places such as Uganda, which treats same-sex relations as a crime punishable by life in prison.

"If police infrastructure is being used to go after LGBT people, you're using resources that could be against terror," Berry said.

Still, Berry said he is optimistic about succeeding in his unique mission, based on the number of welcome messages he has received from governments and businesses around the world: "There's a great desire to help in a lot of places."

We must welcome gays, lesbians as they 'were created to be'