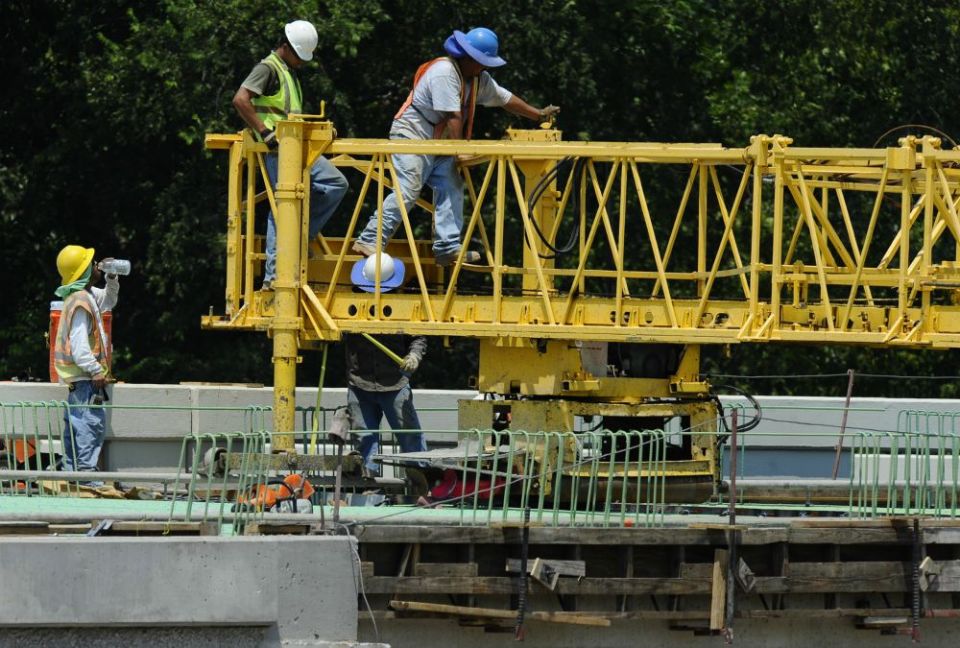 Highway construction workers are seen in Dallas in 2011. Democrats have wanted to work with the president on a strong infrastructure program since the 2016 November election. (CNS/Larry W. Smith, EPA)

The current consensus seems to be that the Democratic party has no plan, vision or agenda, other than being an anti-Trump party. My contention is that the anti-Trump agenda is in fact, at least partially, a positive agenda. Let me provide some examples.

Democrats oppose the president's efforts to repeal the Affordable Care Act. On the positive ledger, they are saying that Americans should have quality health care, and they promote fixing the flaws in Obamacare rather than repealing it. They want to stabilize the insurance markets and keep insurance rates from rising.

Their opposition to the travel ban addresses many issues including fairness and due process. Democrats assert that, as a national security issue, there is a need to work with Muslims in America to identify and address young people who may be radicalized. Respecting all Americans, including Muslims, and cooperating with them to keep our country safe is a vital and positive issue. Alienating American Muslims and Muslim countries around the world is a short-sighted and dangerous approach to the threat of terrorism.

Opposing the president on his immigration policy of aggressive deportation is again an issue of fairness. The positive message is the critical need for a comprehensive and sensible policy that recognizes the contributions of immigrants and does not criminalize people for wanting a better life for themselves and their children. A path to citizenship is the only sensible way to address the millions of immigrants who are undocumented. Comprehensive immigration policy is good for the country and good for citizens and non-citizens alike.

Supporting and encouraging those who came to this country as children, and who are Americans in every way except in their documentation, is especially important. So many of them are talented and enthusiastic. They have so much to offer to our country, and to their country.

Democrats have wanted to work with the president on a strong infrastructure program since the election. Here the issue is jobs and necessary improvements to our problematic infrastructure. This is clearly a bipartisan-positive issue. Yet no efforts at all are underway on this issue from this administration.

Democrats believe the government, particularly the State Department, should be staffed with experienced and qualified people for the government to function effectively. The failure of this administration to fill hundreds of positions in this government represents another national security issue. As crises arise in various parts of the world, who will have the knowledge base and the historical context to assist in the development of a coherent strategy?

Finally, Democrats believe we need to hold Russia accountable for its actions during the election and since. There is evidence that President Vladimir Putin is taking actions in different areas of the world that are not in our interest. Democrats and Republicans moved to enact sanctions to hold Russia accountable for its actions. The Trump administration, however, has shown little interest in challenging the actions of the Russian government.

It may also be advisable to ask whether the Republicans themselves have had a meaningful and clear agenda over the last eight years. It is clear that during the last administration, their agenda had been to obstruct everything President Barack Obama tried to do. Even Republicans would agree this was their agenda. Senate Majority Leader Mitch McConnell even promised to ensure that Obama would be a one-term president.

Of course, the items I mention do not constitute a full and comprehensive agenda, though I believe they represent significant issues all Americans need to consider. The missing puzzle piece must include specifics about how to make life better for the average American. Ultimately, I believe that will require a spokesperson to organize and present the Democratic case for America. That might have to wait till we have a candidate for president. The Democratic National Committee, or any member of Congress cannot really fill that void.

Someone will emerge who can state the case for the future of the party and the country. Who might that be? Although I believe Senators Bernie Sanders and Elizabeth Warren represent an important and vital part of the party, I don't see them as representing a winnable vision for the country, one that can achieve a consensus throughout the American electorate.

I don't know who that individual will be, but I don't doubt that someone will emerge who will connect with the American people and provide a vision of where we will choose to go as a country. Corey Booker, senator from New Jersey, is just one person I would suggest who has the kind of rhetoric that could catch fire.

Donald Trump became president, among other reasons, because he was seen as "telling it like it is," and as being an authentic messenger for his populist message. Unfortunately, he has failed to genuinely attempt to implement many of the policies he touted during the campaign.

A democratic messenger with an authentic message that he or she believes in may be exactly what we need.