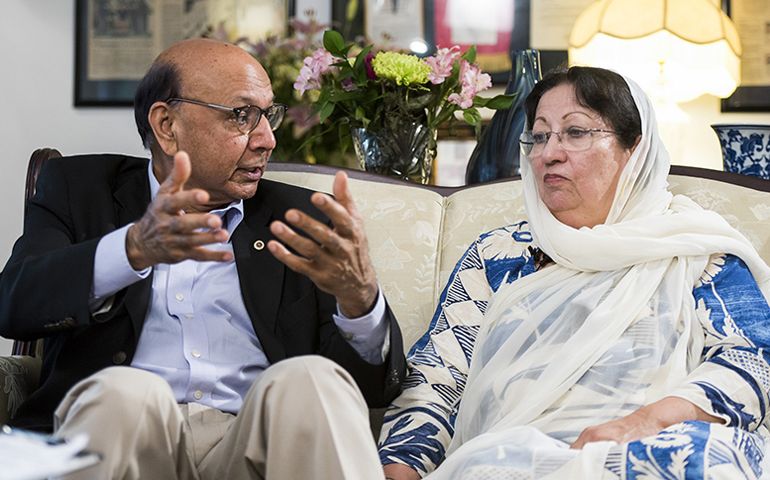 CHARLOTTESVILLE, Va. — Khizr and Ghazala Khan, the Gold Star parents whose appearance at the Democratic National Convention created a firestorm for Donald Trump, say they felt compelled to speak out because the welcome they felt when they immigrated to the United States nearly four decades ago is eroding in the face of this year's presidential campaign.

Even the decision to wear a hijab, the traditional head scarf worn by some Muslim women including Ghazala Khan, has become the source of anxiety.

"You see people wearing scarves, people are pointing fingers at them and throwing them out of flights and calling them names when they pass by and all of that," Khizr Khan, 66, said on Capital Download. "Most Americans are against this kind of nonsense, but there is an element that has gotten voice, has been encouraged by this political rhetoric, and especially this election season has made it worse."

He says Trump's call to ban all Muslim immigrants -- a position the Republican nominee has since modified -- and his provocative statements against Mexicans and others bear some of the responsibility for a loss of civility and restraint. "The voices that wouldn't dare because they were afraid of the decent America to condemn them ... have gathered courage to show their ugliness," he told USA Today's weekly video newsmaker series.

Khan and his wife are newcomers to the political wars, naturalized citizens who have voted for both Democrats and Republicans. It was less than two weeks ago that, standing on stage at the Wells Fargo Center in Philadelphia, Khizr Khan pulled his worn pocket-sized copy of the Constitution from his pocket and defiantly offered to loan it to Trump to read.

A lawyer, Khan has long passed out copies of the Constitution to students and others. The binding of his own copy is falling apart, with passages including the Fourteenth Amendment highlighted and notes written in the margins.

Since the convention, the couple have become among the best-known Muslim Americans in the nation -- interviewed on TV and radio, profiled on the front pages of newspapers, even the subject of a crowd-sourced fundraising campaign encouraging him to run for the Virginia House of Delegates. Their home here features a large American flag flying near the entrance and a wall of the living room dedicated to the memory of their son, Humayun, a U.S. Army captain who died a hero in Iraq in 2004.

After their appearance, Trump complained Khizr Khan unfairly had attacked him and questioned why Ghazala Khan hadn't spoken on stage. (She says the photo of her son projected behind them would have made her break down in tears.) The Republican leaders who implicitly rebuked Trump by publicly expressing sympathy and respect included Trump's running mate, Indiana Gov. Mike Pence, who called their son "an American hero."

In an ABC News/Washington Post Poll released Sunday, three of four Americans disapproved of the way Trump had handled the situation. Just 13 percent of registered voters in the nationwide survey approved.

Hundreds of letters and cards, most friendly, have arrived at the Khans' home since then, many addressed simply to "Mr. and Mrs. Khan, Charlottesville, VA." They nearly fill a cardboard banker's box on the dining-room table. Dozens more are piled on the kitchen table, where Ghazala Khan is reading and responding to them. For now, she puts aside the ones without return addresses or signatures -- more than likely negative ones that accuse them of being political pawns or worse.

During the past year, the Khans say they have heard rising fears from Muslim friends and family members, especially children.

"For the whole year last year, we've been sitting very quietly like many, many, many American citizens, watching this political process take shape, watching the disrespect of Donald Trump, him disrespecting immigrants, Muslim immigrants, women, judges, even senior members of his own party," Khizr Khan said. When they would go out to dinner and other community gatherings, the American-born children of Muslim immigrants would sidle up to him. "They would come to me, personally close to me, and they'll say, 'Mr. Khan, you're a lawyer. Will we be thrown out of this country?'

"We go to school and our friends taunt us: 'You will be thrown out when Trump becomes president.' "

Ghazala Khan says she received a nervous call from her niece, who had grown up in the United States and was returning after spending two years in Pakistan. "She called me, 'Auntie, I'm so disturbed because all I have heard in Pakistan: Trump is going to teach Muslims a lesson.' "

Now that she's back, Khan says her niece says it's "not that bad," though she encounters more hostility toward the hijab she wears than she did before.

The Khans say they hope to continue speaking out during the fall campaign. They don't rule out doing political events for Hillary Clinton, although they say her campaign hasn't asked them to do so. In the days after the convention speech, Clinton did phone to thank them, telling Ghazala Khan that she would be thinking of her during the rest of the campaign.

Khizr Khan says the campaign didn't write his convention speech or edit it, other than to insist he shorten a six-page speech to a page-and-a-half for time constraints.

Ghazala Khan was his editor, convincing him to remove a section that alluded to the controversy over lifted passages in the speech Melania Trump delivered at the Republican convention. Only in the cab on their way to the arena did he decide to add the gesture of taking out the pocket Constitution he always carries.

On his wife's advice, he practiced in the cab pulling it out of his jacket and holding it right-side-up and cover facing out.

During the interview Monday, a box arrived at the front door: another shipment of pocket-sized Constitutions.

The divided soul of the Democratic Party

I felt sorry for Cardinal Dolan at the Al Smith dinner