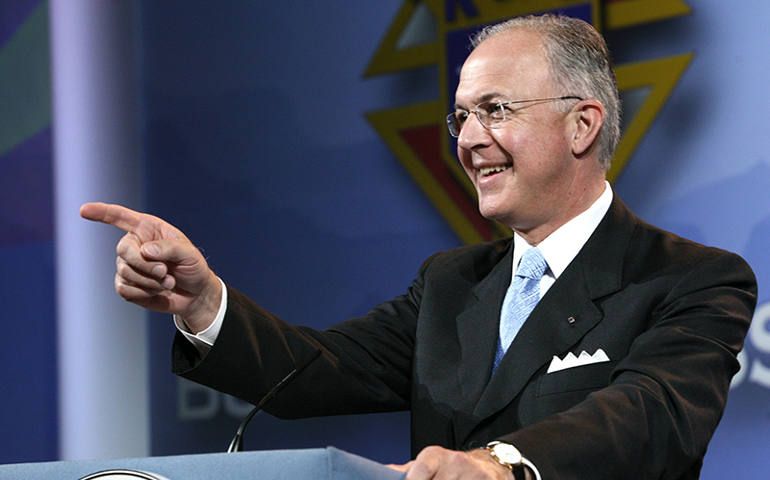 Carl Anderson, leader of the Knights of Columbus fraternal order and one of the most influential lay Catholics in the church, has said that abortion outweighs all other issues in the presidential campaign and Catholics cannot vote for a candidate who supports abortion rights. (Photo courtesy of Knights of Columbus)
This article appears in the Election 2016 feature series. View the full series.

Carl Anderson, leader of the Knights of Columbus fraternal order and one of the most influential lay Catholics in the church, has said that abortion outweighs all other issues in the presidential campaign and Catholics cannot vote for a candidate who supports abortion rights.

Abortion is not “just another political issue" but "is in reality a legal regime that has resulted in more than 40 million deaths," Anderson told the Knights' international convention in Toronto in a speech on Tuesday afternoon.

“What political issue could possibly outweigh this human devastation? Abortion is different. Abortion is the killing of the innocent on a massive scale," said Anderson, a veteran Republican official who worked for the late North Carolina Sen. Jesse Helms and served in various positions in the Reagan administration.

"We need to end the political manipulation of Catholic voters by abortion advocates. It is time to end the entanglement of Catholic people with abortion killing. It is time to stop creating excuses for voting for pro-abortion politicians," Anderson said in remarks prepared for delivery to the crowd, which included some 100 Catholic bishops.

“We will never succeed in building a culture of life if we continue to vote for politicians who support a culture of death,” he said.

The role of abortion rights in politics has long been a flashpoint for Catholic leaders and Catholic politicians.

In recent decades, the U.S. hierarchy has grown increasingly conservative and for many bishops an elected official's stance on abortion rights has become a litmus test for a Catholic candidate's worthiness to receive Communion and for any candidate to receive the support of Catholic voters.

Abortion, along with gay marriage, have been called "non-negotiables" that can disqualify a candidate in the view of many leaders -- a stance that has effectively favored Republicans over Democrats who have become more uniformly supportive of abortion rights.

That dynamic has been playing out in recent weeks with Republican nominee Donald Trump saying he opposes abortion while Democratic nominee Hillary Clinton has steadfastly supported abortion rights throughout her long public career.

Sen. Tim Kaine, Clinton's running mate, is a practicing Catholic from Virginia who says he is personally opposed to abortion but supports abortion rights.

The election of Pope Francis in 2013 scrambled much of the longstanding political dynamics, however.

While Francis is staunchly against abortion, he lamented early on in his papacy that the church speaks so much about abortion and matters of sexuality at the expense of social justice and the poor and marginalized -- topics he has put at the center of the church's mission.

“I have never understood the expression non-negotiable values,” Francis said in a 2014 interview. “Values are values, and that is it. I can’t say that, of the fingers of a hand, there is one less useful than the rest. Whereby I do not understand in what sense there may be negotiable values.”

It remains to be seen how the abortion issue will play out in the church -- the Knights of Columbus are huge benefactors to dioceses and charitable causes -- and in the campaign.

Trump is viewed with suspicion by some abortion foes who worry that his conversion to their cause is recent and not sincere. They also argue that Trump's position on other issues are disqualifying.

A recent Pew Research Center survey showed that abortion ranked near the bottom of issues that Catholics, and the general population, viewed as very important in determining which presidential candidate to support in November.